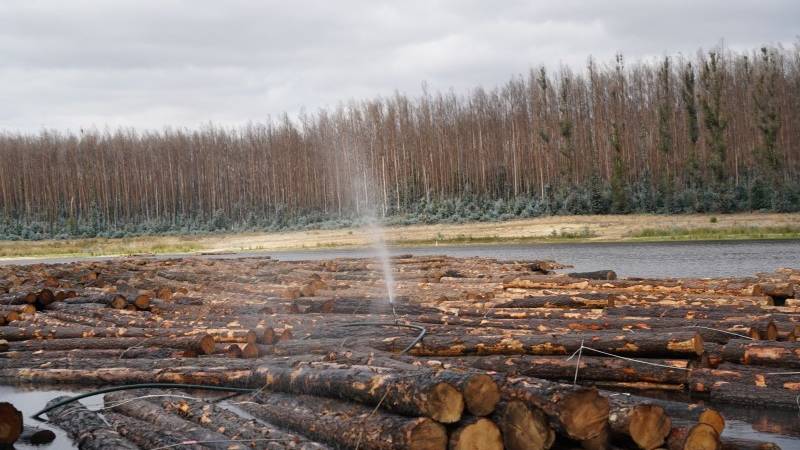 VALUABLE RESOURCE: The dam on KI Plantation Timber's Macgill property, where it has plans to store more than 100,000 tonnes of pine. Photo: KIPT

The state government says it is still "exploring all options" to get KIPT's timber to the mainland.

THE state government says it is still "exploring all options" to get timber from Kangaroo Island onto the mainland to help address the critical shortage in the building industry, despite recent reports indicating KI Plantation Timbers had plans to knock the trees over and burn them.

Primary Industries Minister David Basham said they continued to lobby the federal government for access to the Forestry Transport Assistance Scheme, which would subsidise the transport of the timber off the island, while they were also working with industry on other "economically-viable transport options".

"I first wrote to the Commonwealth raising our concerns regarding timber shortages in SA in early May, before meeting with (federal Assistant Minister for Forestry and Fisheries Jonno Duniam) in Canberra in early June," he said.

"Senator Duniam has agreed to consider SA's request to extend the FTAS to help with the costs of moving salvageable timber off KI.

"There is a valuable resource on KI ... it is inconceivable the logs would not be brought to the market."

The company has adopted a new strategy to remove the tree crop and convert its land for more traditional agricultural use. - KANGAROO ISLAND PLANTATION TIMBERS

The comments come as the state government rejected KIPT's Smith Bay port proposal last week, which prompted the company to announce it would be "immediately" adopting an "agricultural strategy".

"The company has adopted a new strategy to remove the tree crop and convert its land for more traditional agricultural use," a company statement to the Australian Stock Exchange said.

"This reversion strategy will require significantly less capital, and will revert the company's 18,696-hectare of high rainfall land to a productive agricultural estate over a shorter period of time.

"KIPT will, however, continue to pursue any salvage harvest opportunities - particularly for softwood plantations - if they present attractive risk-adjusted returns to shareholders."

Retiring KIPT managing director Keith Lamb was then quoted in Adelaide-based media saying that the company would now focus on "pushing the trees, heaping them and burning them".

Mr Lamb and KIPT chairman Paul McKenzie would not comment any further to Stock Journal.

KI mayor Michael Pengilly was concerned by the comments and questioned why the company's existing, but damaged, timber mill and processing facilities near Parndana had not been repaired already to process salvageable timber.

The company has received $60 million in insurance payouts and should have developed plans by now, he said.

In a statement, Sen Duniam said the federal government was "committed to supporting the forestry industry, including on KI".

"I will continue to work with the SA government, alongside other interested states and territories, as this is a national issue," he said.

Sen Duniam would not give a timeline on when a decision about SA's proposal would be made.

The lack of decision-making is causing major concerns for the building industry, who fear if a solution isn't found soon to economically transport the timber off KI, then it won't happen at all.

Master Builders SA chief executive officer Will Frogley said while KIPT's Smith Bay port rejection was "disappointing", the proposal was years away from operation and was "never going to solve the immediate issue, which is today's timber shortage".

Mr Frogley said he attended a meeting with the state government, KIPT and other relevant stakeholders on Monday, where the government insisted it was "still exploring other options".

"The KIPT proposal indicates they want to 'immediately' convert the trees into farmland, so I fear if this doesn't get sorted out in the next couple of weeks, KIPT will just push it down and burn it, which will be such a waste.

"We also discussed boosting the transport capacity out of Kingscote, American River and Penneshaw as soon as possible.

"But there are two parts of the solution that need to be finalised, and you can't have one without the other.

"The first is the $2m Expressions of Interest process, which closed last month."

We are doing everything we can to get these decisions moving, but we are running out of time. - WILL FROGLEY, MASTER BUILDERS

This state government program encouraged innovative proposals that resulted in the 'manufacture of additional building timbers in the short-term to support the construction of homes in SA'.

"Three mills applied for this, but projects are up in the air if they can't get the logs off KI," Mr Frogley said.

"The cost of getting the logs off and the efficiency of getting them off in large numbers is the biggest challenge we face. And that solution is waiting on whether the state government gets access to the FTAS.

"We are doing everything we can to get these decisions moving, but we are running out of time."

Morgan Sawmill at Jamestown applied for the EOI funding early last month - hoping to add a double shift - but has yet to hear back from the government.

The business had been trucking pine logs from KI on the SeaLink ferry at a loss in order to meet customer demands.

Operator Luke Morgan hopes the KIPT announcement will "get the government into gear" and get projects "happening now".

"I don't know what the hold-up is, but we can't afford for KIPT to stop supplying to us," he said.

Despite frustrations surrounding the future of the timber, the KI farming sector has welcomed the "agricultural strategy" news.

Agriculture KI chairman Rick Morris said he had been waiting 20 years for KIPT to make this decision.

"This is the best news for the island since the Soldier Settler Scheme in terms of the economic and social development," he said.

"Hopefully we see more businesses, more families and more farm workers as what originally were 35 farms be reverted back to agriculture."

KIPT has estimated there is about 300,000 tonnes of salvageable pine logs on the island to build 10,000 new homes.

Forestry SA representatives recently visited the island to assess stocks, with a final report on the level expected to be completed in the coming weeks.