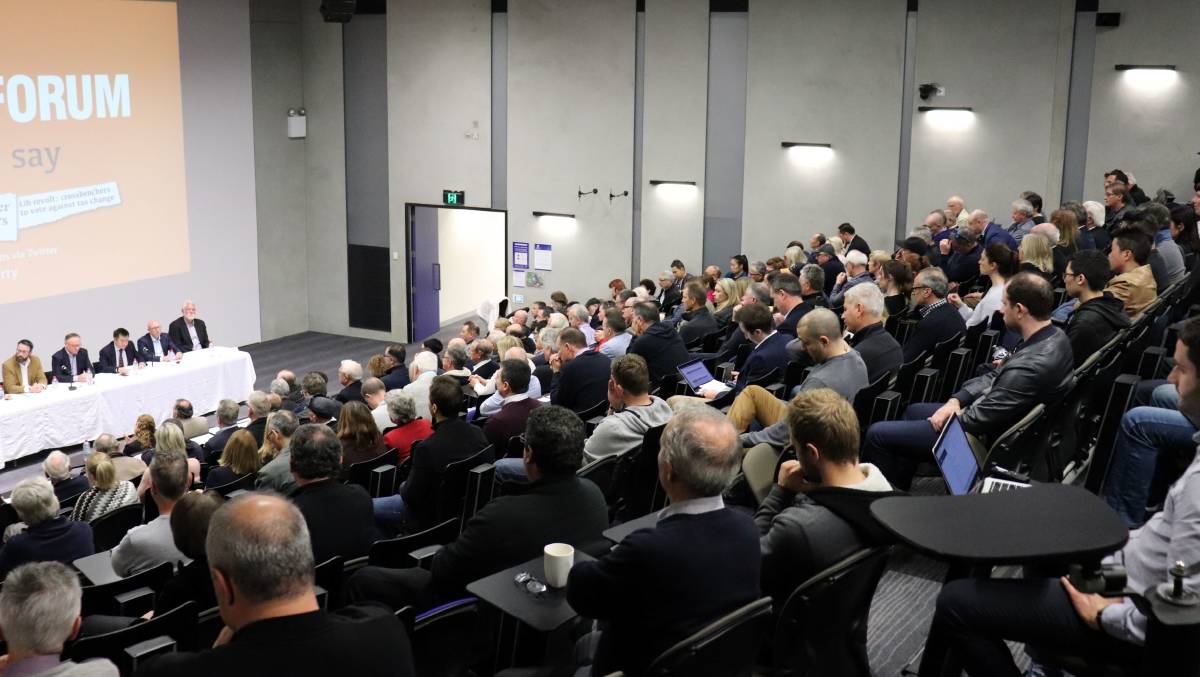 a land tax forum held by SA-Best earlier this month that attracted about 400 people.

A push is on to delay the state government's controversial land lax reforms.

THE state's peak employer group, Business SA, is being backed by SA-Best in demanding the state government's controversial land lax reforms be delayed.

Business SA has released a position paper on land tax aggregation, which showed more than 60 per cent of people who took part in a survey it commissioned owned one or more properties - showing it was a common form of investment for the state's business community.

Business SA chief executive Martin Haese said the survey also showed 76pc of those would be forced to sell their commercial or residential properties as part of an asset restructure if subjected to the proposed land tax changes.

"The results show us that land tax aggregation changes will affect the whole state - from retailers who lease their space to truck drivers who might own their workshop, and mum and dad small business owners who have diversified their risk by buying a rental property," he said.

"In the past, property was considered a safe investment option for our retirement savings and to diversify risk, but business owners across the state are telling us they're going to sell their assets and many are even considering investing interstate, because they can't afford to absorb the land tax aggregation increases."

Mr Haese said the state's businesses were facing a triple whammy of property revaluation increases, land tax aggregation and an uncompetitively-high rate being charged, all of which threatened confidence.

"This trifecta will put pressure on the entire state's economy, including property owners flooding the market with commercial and residential properties, developments being put on hold and supply chains being disrupted," he said.

"If the government doesn't act now to delay the introduction of the tax or introduce a rate competitive with the other states, SA's business community will suffer significant damage at a time when they're still facing high operational costs."

Business SA wanted to see a further reduction to the top tier land tax rate of 2.9 per cent, as it remained the highest rate in the country.

It also called on the state government to delay its land tax aggregation reforms until the Valuer General's revaluation process of all properties in SA has been completed.

The Business SA plea follows a land tax forum held by SA-Best earlier this month that attracted about 400 people - many who voiced their anger at the government's planned changes.

SA-Best treasury spokesperson Frank Pangallo said the government now has a compelling and growing body of evidence showing the huge negative impact its proposed new laws will have on the economy.

"The government's proposed land tax reforms have sent shockwaves throughout the community - not just the business sector, but with mum and dad investors too," he said.

"The only way to proceed in any form is with proper consultation and feedback from the business and property sectors, as well as the general community."

Mr Pangallo said once the proposed legislation was introduced, he would move to refer it to a Parliamentary Joint Committee, which the Labor Opposition and fellow crossbencher, John Darley, have indicated they are prepared to support.

"If the Treasurer thinks investment property owners are just going to roll over and cop massive hits, he is deluding himself," he said.