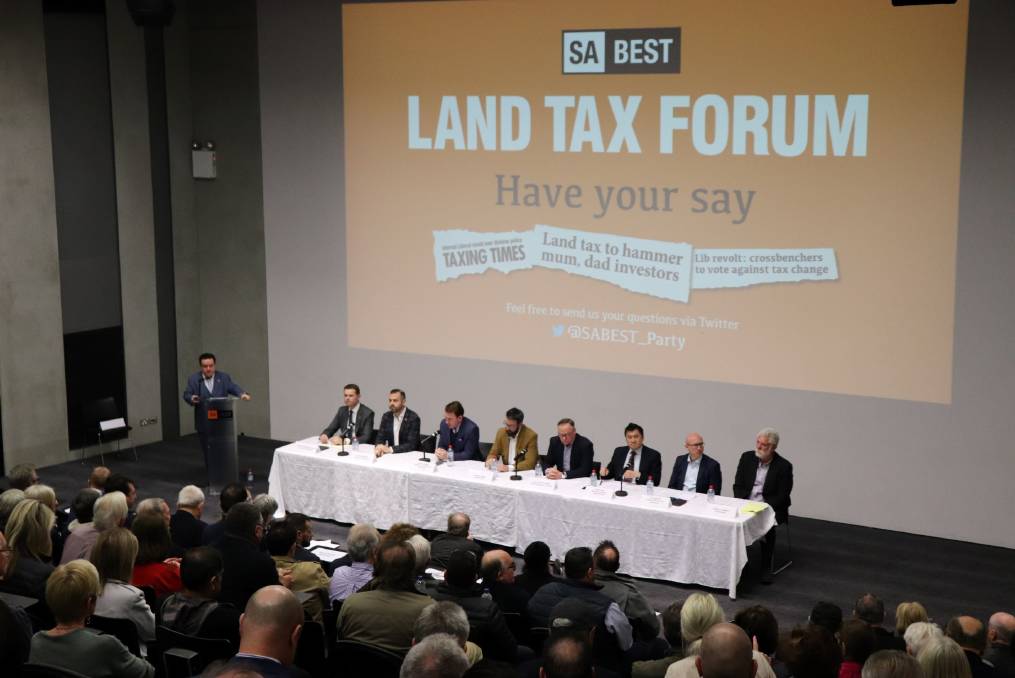 TALK FEST: More than 350 people attended the SA-BEST-hosted land tax forum in Adelaide on Sunday, where a panel talked about the impacts of the reforms.

Rural investors with money tied up across multiple properties or separated into trusts are set to pay more land tax under proposed reforms.

WHILE not applicable to primary production land or primary residences, rural investors with money tied up across multiple properties or separated into trusts are set to pay more land tax under proposed reforms.

Treasurer Rob Lucas announced the land tax reforms in the state budget in June, which included a particularly controversial move to an 'aggregation model'.

Aggregation would mean land tax would be based upon the entire value of one's portfolio, rather than on the individual value of each site.

Mr Lucas said the changes would "reduce unfairness in the system".

"Under existing arrangements, some landowners are setting up complex ownership structures designed to avoid or minimise land tax payable," he said.

"Why should somebody who owns seven properties, valued at $400,000 each, not pay a single dollar of land tax on $2.8 million worth of property?

"This measure aims to close a loophole, which we don't think is fair and we will be introducing a model that works well in Vic and NSW."

SA-Best treasury spokesperson Frank Pangallo said the aggregation model would inflict pain on communities across the state. He introduced a motion in parliament last week for an urgent debate on the changes.

He is also considering calling for the establishment of a parliamentary committee to investigate the matter.

"For those of you that have legitimately and legally used trusts to protect your assets, minimise costs and secure future income in retirement, the government now wants to categorise you as little more than tax dodgers and take a bigger cut of your hard-earned money," he said.

"Everyone is prepared to pay taxes, but they must be fair and equitable.

"Governments can't just shift the goal posts when it suits them, and without going through a consultation process.

"These land tax reforms will have a 'domino effect' across the state's entire community, posing a real threat to SA's growth and employment opportunities - let alone sending the wrong message to overseas and interstate investors."

But Mr Pangallo remained dubious about that consultation after the government declined a forum invitation.

"Representatives from major industry groups here today have also yet to be contacted," he said.

Mr Mullighan spoke of a similar proposal the Labor Party rejected in 2005 "not wanting to increase tax burdens on South Australians".

But he refused to confirm his party's position on these new reforms "until they had seen more detail".

He did support the establishment of a joint parliamentary committee into the land tax changes to provide more "clarity".

When the Liberal Party came into government, we were set on rebuilding SA's economy and lead the way across Australia, but these tax reforms are counter-productive to that. - NICK McBRIDE

In the South East, Member for MacKillop Nick McBride welcomed public consultation, but remained concerned about the reforms.

"When the Liberal Party came into government, we were set on rebuilding SA's economy and lead the way across Australia, but these tax reforms are counter-productive to that," he said.

"Many of my constituents have bought investment properties, for superannuation and successional purposes or to provide income during their retirement, and have done all they can to avoid that 3.7pc tax rate.

"If they didn't have that opportunity, they probably wouldn't have invested.

"If the government are going to do this, alongside raising the value of assets, there will be a double whammy affect and inflict real pain on property investors.

"The plan is to drop the rate to 2.9pc over time, but it will still be the highest rate of land tax in Australia.

"If they go ahead with this, the government needs to lower the average land tax rate immediately."

The aggregation model is estimated to provide another $40m, but changing the threshold and reducing the land tax rate from 3.7pc to 2.9pc will cost the government $47.2m in revenue.