Excitement is building about potential prices in the upcoming Naracoorte first-cross ewe and ewe lambs sales. 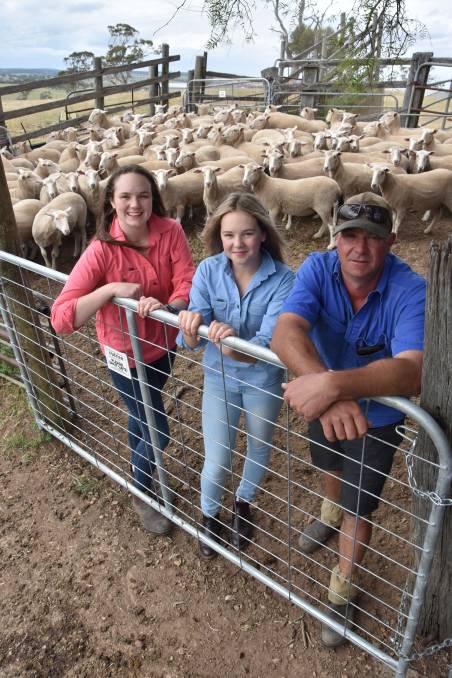 SOUTH BOUND: Simon Formby (right), Strathalbyn, with daughters Stephanie, 16, and Vanessa, 14, and the tops of their first-cross ewe offering bound for Naracoorte.

EXCITEMENT is building about where prices may head in the upcoming Naracoorte first-cross ewe and ewe lambs sales, following the $516 top paid for 1.5-year-olds at Bendigo's annual sale in Vic on Friday.

But despite expectations being high, agents remained cautiously optimistic as prices that high weren't necessarily viable.

"But they're also paying $7000 an acre for country, so who knows?" PPHS director Richard Harvie said.

"It will be a reasonable sale without being too crazy.

Both sales will be interfaced with AuctionsPlus for the first time.

PPHS have the largest offering - more than 26,000 head across the two days - which Mr Harvie says is either on par or slightly better quality than last year's sale.

He expects most of them to be sold within a 150-kilometre radius of Naracoorte, where there is "plenty of grass about".

He didn't expect border closures to have an effect.

"After dealing with that issue last year, those wanting to come over would have gotten their cross-border passes sorted already," he said.

"If not, they have AuctionsPlus available to them."

I expect the sale to be similar, if not slightly better, than last year. - WILL NOLAN

Southern Australian Livestock's livestock manager Will Nolan said expectations were high for the sales, "but we also have to be realistic".

"I expect the sale to be similar, if not slightly better, than last year," he said.

"If we can get anywhere near $500 for ewes, that would be sensational, but vendors also have to be wary that the price level needs to be viable.

"Those prices can't be consistent as people need to buy ewes that are in their price bracket, which will also make a return down the track."

Mr Nolan said the ewes were presenting as good as they had in the past.

"The yarding is certainly good and of a high standard," he said.

"Most have come through a dry start, and wet, cold winter, but the past six weeks have been pretty friendly."

He expects most of the ewes would be sold locally, particularly the 1.5yo, with some to across the border and into the Fleurieu Peninsula.

NARACOORTE vendor Simon Formby said he would be "surprised" if today's sale didn't top the new national record set in Vic on Friday, as the quality of ewes on offer in the South East was always outstanding.

And the sale being interfaced with AuctionsPlus only adds to his optimism, he said.

Simon says their quality is high, despite the late season.

"I rotated them through the paddocks with the best feed to keep them up to a standard as that's how we normally roll," he said.

"We also sow a few paddocks for feed (clover and rye) and that helps to supplement if feed get short."

The Formbys run 1100 Merino ewes on 'Rushmore Run' at Strathalbyn, specialising in producing first-cross ewes for the annual Naracoorte sale, where they have been a vendor for nearly a decade.

"We used to sell at the Strathalbyn sale before that ceased," he said.

"I had always been interested in selling at Naracoorte, but never knew if our ewes would stack up or would be sought after.

"But our first-cross ewes do well there, and it has given us the confidence that our breeding and genetics is on the right track."