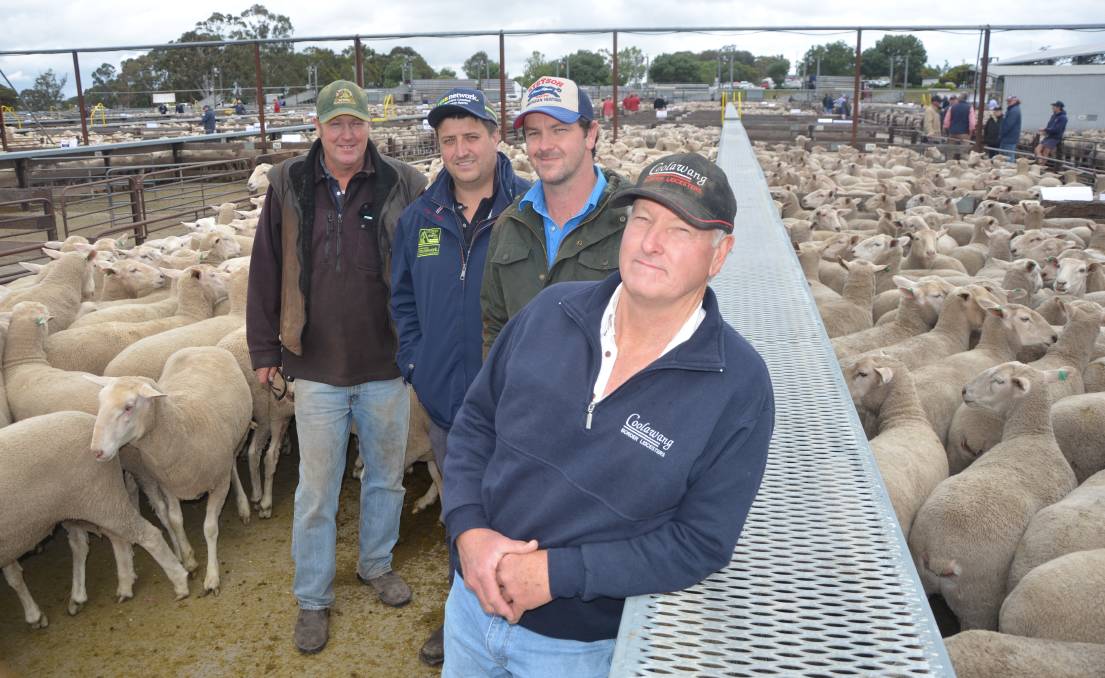 Prices rarely dipped below $400 across the 16,574 head yarding, an amazing result even in comparison to the exceptional 2019 sale which peaked at $402.

The $472 figure was perilously close to the $476 paid for Yorke Peninsula scanned-in-lamb first-cross ewes in late June.

The 114-head line of June 2019-drop ewes weighed in at 86 kilograms and were shorn in late September. They also won the highest-price vendor-bred line award, sponsored by Castec Rural Supplies Naracoorte.

An opening bid of $450 set the tone and it was O'Connor and Graney agent Ethan Bronca, on behalf of Tim Widdison, Tarpeena, who held out longest.

"We only sold the first lot of lambs (from last year's ewes) yesterday and they topped at $216," he said.

Mr Bronca said with the old ewe market so strong, there was still plenty of margin for producers paying that sort of money for 1.5-year-olds.

Coolawang's Lachie James said they strived to send their ewes into the sale in that sort of condition each year.

He said confidence stemming from a good season and huge demand from Vic and NSW contributed to the prices needed to buy quality first-cross ewes this year.

"This season has been favourable and it has been easier to get them in this condition," he said.

"It's a credit to all vendors that come into this yarding - there's a lot of work, a lot of effort and a lot of stress that goes into it and it's good to see everyone rewarded."

Another vendor selling through Elders, Ian Farley, Marmon Hill, Jabuk, watched as 135 of his 68kg, April 2019-drop ewes - sired by Inverbrackie Border Leicesters and out of Mallee-bred ewes - made it onto the sale podium selling for $462 to Will MacDonald, Blackwood Park, Strathalbyn.

Another line of Mr Farley's were knocked down for $448 to Green Triangle Livestock and he was ecstatic with his overall average of $447.77 for 535 ewes.

Also surpassing the top price at Bendigo last week were 346 July 2019-drops, from Coolawang and Paxton sires and out of Gum Hill ewes, from the Ireland family, Deepwater Trust, Lochaber, which made $450.

Both runs were taken by Engler Enterprises, Maaoupe, through agents Thomas DeGaris & Clarkson.

Engler's livestock manager Barry Snook, Beachport, said the prices were just what had to be paid in the current market and he was confident they would provide good returns.

"Last year we bought ewes and with the mutton price plus our lamb prices we broke even in the first year," he said.

Receiving $448 for 124 Deepwater-bloodline ewes were DA&GM Eckert, Mentara Park, Malinong, who sold another run of 243 of the same description for $444.

Winning the Castec award for the highest price non vendor-bred line was Scullion Farming, Hynam, for 69 Cooranga-bld ewes that sold for $446.

GW&RJ Bridgman, Strathalbyn, received $444 for 141, 68kg ewes - sired by Inverbrackie rams and out of ewes from northern SA.

Topping the Nutrien offering, and the first pen of the sale from Rushmore Run, Strathalbyn, were 100 vendor-bred ewes from sired by Inverbrackie rams and out of Lines Gum Hill ewes which sold for $430 to Elders Mount Pleasant.

"We knew we were going have similar results to what the Vic sales have been doing and as we've seen it's even topped them," he said.

"It's the best conditioned yarding of sheep we've seen. It's a credit to everybody, especially the way this year's been, to get them shorn and presented as they have.

"The mutton job put the floor in today. There's plenty of old crossbred ewes making $170 to $230 so your trade-in price is starting to look pretty realistic when you look at it that way."

Elders' Tom Dennis said buyer confidence and a string of good seasons had been major drivers behind the amazing sale.

Mr Dennis described the James' top-priced ewes as immaculately-bred sheep that were extremely even in type and style.

"Coolawang are the leading Border Leicester stud in the country and they also have their own closed Merino flock, which is at elite stud level as well, so they tick both sides of the breeding equation," he said.

"The family are also very meticulous in their preparation and presentation as well. They have return buyers every year."