Coolawang Border Leicester stud reached lofty heights multiple times at its sale at Mundulla on Thursday last week, reaching an impressive top price of $26,000, with the second top-price not far behind, at $25,000. 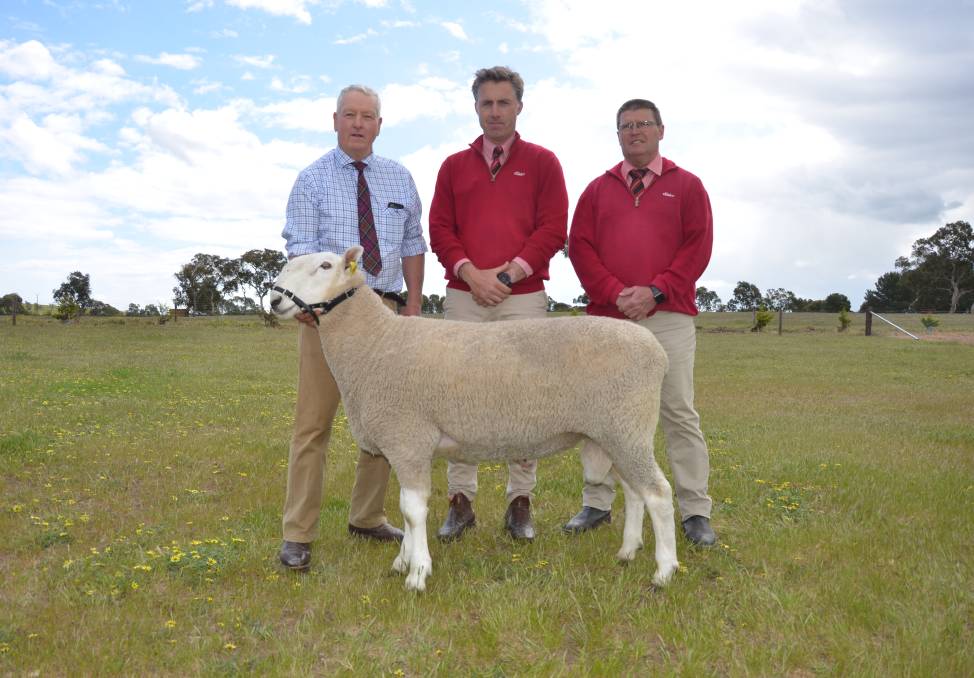 Coolawang Border Leicester stud reached lofty heights multiple times at its sale at Mundulla on Thursday last week, reaching an impressive top price of $26,000, with the second top-price not far behind, at $25,000.

In a sale which had plenty of phone bidding, action online on AuctionsPlus, and a considerable buying gallery ringisde, 10 Border Leicester stud rams sold to $26,000, averaging $10,00 while all 182 flock rams also sold, peaking at $4600 and averaing $3192 - a sensational jump on last year's average of $2011.

Bids flew from the start of the ram sale, with Lot 1 making the top price. It was knocked down to Jeff Sutton, Wattle Farm Border Leicesters, Temora, NSW, with phone bidding carried out by Tom Dennis, Elders Naracoorte.

Mr Sutton has bought about half a dozen rams from Coolawang since first investing in the stud's genetics in 2013, and said the top ram this year would be a "very worthwhile" addition to his enterprise.

"Very rarely can you find a sheep that has the structural confirmation, with a good quality head, fine wool, and is high indexing, but I looked at all those things and the ram ticked all the boxes," Mr Sutton said.

While Mr Sutton was not able to physical lay an eye on the ram, he had faith in investing in the genetics.

"I have been very happy with the Coolawang traits traits that I have seeing coming through to improve my own flock, and I knew the quality was there and I knew what the ram was going to do for me," he said.

"Cooalwang sires suit our animals and suit our country, we're very happy with our purchase."

The rams here are so well-structured, they exhibit everything the breed has to offer. - TONY WETHERALL

Mr Mutton has been buying from Coolawang for roughly a decade, and were chasing a ram with "plenty of muscle" and good structure to suit their stud purpose.

"It went very well not only for us, but for the breed in general, which has been selling really well this year. Our stud is just continuing the great results which other studs have achieved in the past few weeks," he said.

In addition to the two top-price sires, lot 5 made $16,000, knocked down to Nampara Pastoral, Lucindale, and Mr James said the hefty prices were "very pleasing."

Mr James was grateful to the support of many long-term clients, many who bought in bulk in the flock offering.

Mr Pocock runs about 12,500 Merino and first cross ewes, at properties at Lameroo, Western Flat and Kybybolite, and was chasing Border Leicesters which were early-maturing and were well-built, with positive fat.

In the ewe offering, 11 rams were secured by Ian Kyle, Bairnsdale, Vic to a top of $3000 and averaging $2180, with bidding carried out by Anthony Hurst, Avenue Range.

The sale was conducted by Elders, with Tony Wetherall as auctioneer.

Mr Wetherall praised the stud for its stud and commercial focus.

"The rams here are so well-structured, they exhibit everything the breed has to offer, the consistency they offer to the table for commercial and stud breeders is the strength here at Coolawang, and the genetics are sort out from clients right around Australia," Mr Wetherall said.

"The Border Leicester job is so strong at the moment, and the sale was strong from start to finish.

"The were many repeat buyers here and some new ones as well - the Coolawang bloodline does give premium price in the marketplace."