It was another year and another record at annual Lameroo offshears sale on Friday last week, with the top price of $385 breaking the saleyard record once more, eclipsing last year's top price of $340. 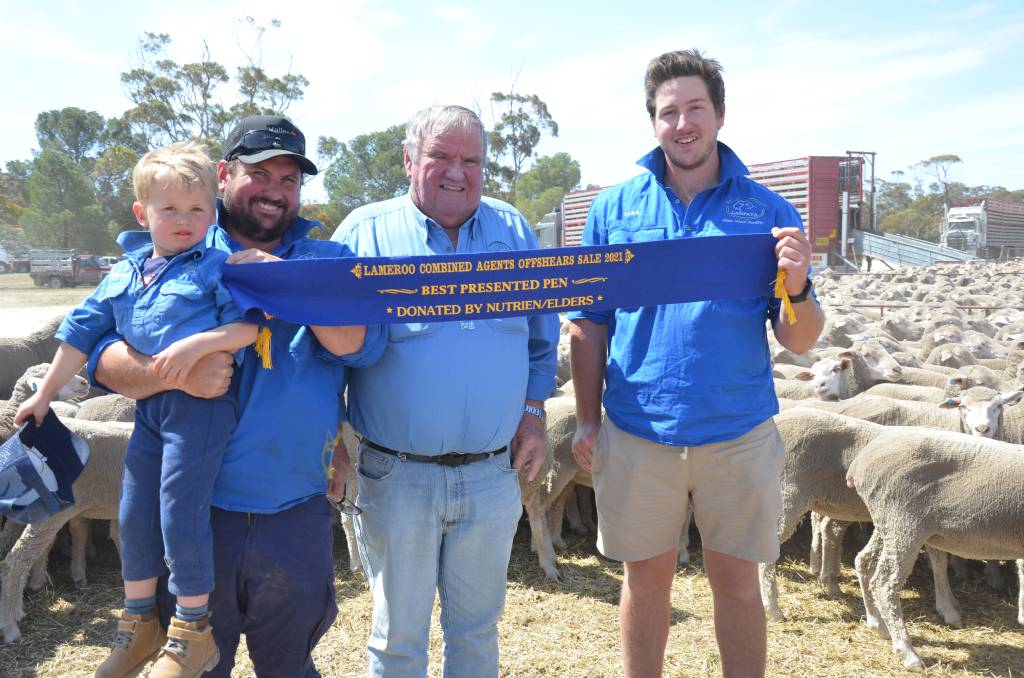 It was another year and another record at annual Lameroo offshears sale on Friday last week, with the top price of $385 breaking the saleyard record once more, eclipsing last year's top price of $340.

The sale was topped by repeat local vendors RM&S Pocock, Lampata, Lameroo, for 380 September-shorn, May/June 2020-drop Lampata-bloods. Of these, 200 were knocked down to Bernard and Simone Lindsay, Prospects Rural, Lah, Vic, 100 to Peter King, JPA Kingsmere, Lah, Vic, and 80 knocked down to Trevor and Leanne Robinson, Ashfield Villa, Warracknabeal, all bidding online using on AuctionsPlus.

The Pococks are no strangers to topping the offshears sale, having made the highest price a number of times before, most recently in 2019 for a pen of 1.5-year-old ewes which made $326.

Lampata's Bruce and Robert Pocock said it was pleasing to be able to present the sheep in such good condition, especially considering the tough season this year in the Mallee.

"We've had decile one rainfall here this year, but we're really happy with how the sheep have come up," Bruce said.

The Pococks said the stud was aiming to produce true dual-purpose Merinos, with Australian Sheep Breeding Values in the top 10 per cent for most traits.

The sale-topping pen was also named Best Presented Pen, taking out the title for a second time, 18 years since the award's inaugural year at Lameroo in 2003.

"We're presenting a type of sheep that is very suitable across a wide area, and we are here to service our clients rather than win the award, but (the award) certainly helps to validate what we've been doing," Robert said.

The Pococks also sold 133 of the same drop which made $290, secured by Kathawarra Nominees, Coonalpyn.

Also making impressive prices in the ewe hoggets was GU Pfitzner, Wanbi who sold 185 March/April 2020-drop Sandalwood Poll Merino/Hilton Heath-blds at $350, with that price also made for 209 Dalveen-blds of the same drop offered by LR Gregurke and Partners, Parrakie.

Elders Lameroo livestock agent Jarryd Finch said while he hoped hogget ewes would make slightly higher prices than they did, the result was still pleasing.

"The older sheep sold exceptionally well, and I always thought at the back of my mind that they probably would, because of good demand and good quality," he said.

"People buy from here because they know the quality of stock on offer. The sheep sold well, but it was good buying value too."

"The young ewes were about $10 behind the average last year, but we weren't far off doubling the yarding we had here last year, so people could afford to pick and choose a bit more," he said.