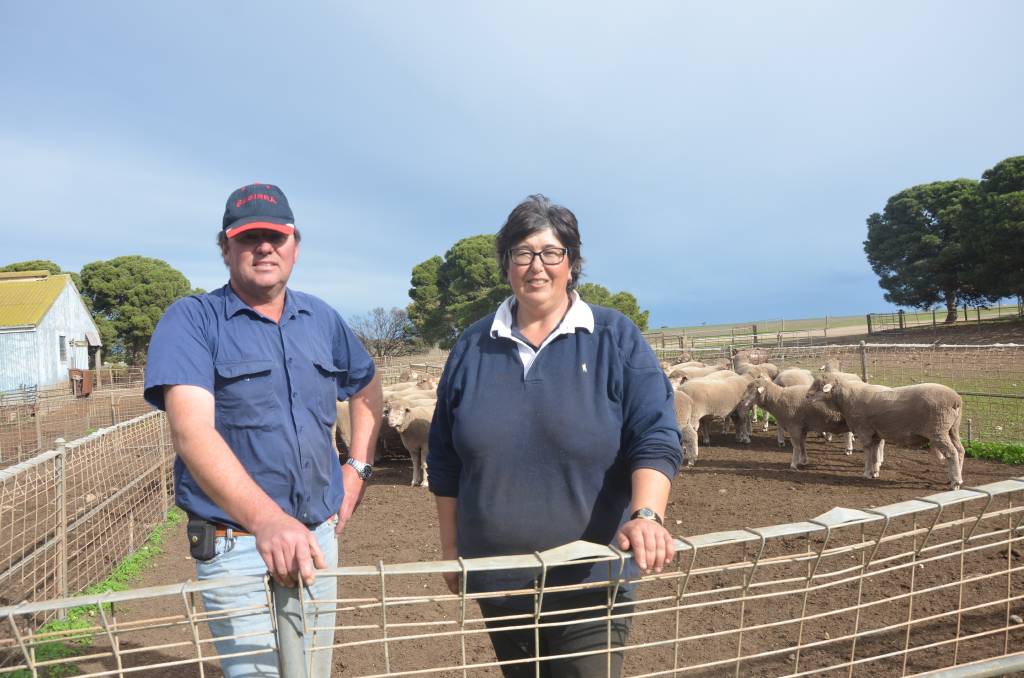 MILESTONE: Craig and Lynda Farrow, Babirra Poll Merino and Dohne studs, Stansbury, are celebrating their 60th annual sale on August 17, with 82 rams in their auction.

UPDATED: The state's week-long lockdown has created a tumultuous lead in to SA's Merino on-property ram selling season but all studs scheduled to have their ram sales in coming days are planning to forge ahead.

UPDATED: After several days of confusion about whether ram sales are considered essential events the SA ram selling season is kicking off today.

Last night a SAPOL spokesperson said under the current directive primary industries is recognised as essential work but only time-critical tasks where delay would jeopardise the present or future availability of food or other essential goods or services.

"Sales such as rams sales should be reconsidered in light of the current direction and put on hold where possible during the seven-day lock down period," the spokesperson said.

But Stock Journal understands the ram sales scheduled for coming days; Canowie, Coonalpyn today; Brimanna at Mitchell and Dalveen, Woodchester on Monday and Roemahkita at Cummins on Tuesday, will all go ahead due to the difficulty of rescheduling them later in the season and need to supply rams to their commercial clients.

Agents and breeders are hopeful that the first sales due to kick off in coming days will go ahead under the same eligibility as last year, when ram sales were considered essential events.

But there has been conflicting advice given by the COVID-19 Hotline and agents are still awaiting clarification from the state government about approved primary industry activities during lockdown.

Nutrien SA stud stock manager Gordon Wood was hopeful ram sales would be included with other livestock sales as essential events during the tight COVID-19 restrictions.

"For people to continue their breeding lines into the future they need to be able to get to sales and get hands-on with their purchases," he said.

Elders stud stock manager Tony Wetherall was confident they would be able to go ahead, with Canowie stud receiving the all clear from the COVID-19 Hotline to hold its ram sale at Coonalpyn on Friday.

"Common sense should prevail. These annual sales are essential for the whole industry to continue on and ultimately for red meat to be supplied to the market," he said.

RELATED: Avalanche of rural event cancellation as SA locks down

Merino studs have enjoyed close to a decade of strong on-property auctions, with most averaging between $1800 and $3000 in 2020. Agents are expecting modest rises again.

Mr Wood expects sale averages could lift 10 per cent to 20pc on 2020 levels as the industry hits a "sweet spot".

"We had a late start to the season but now it seems we are getting rain out of every cloud and although the wool price is not where it once was, Merino wool is still quite positive," he said.

"The forward contracts for lamb and mutton this season are also attractive, so producers can budget for good money for their lambs."

He said many SA studs, especially those with interstate clients, were again offering buyers the chance to bid online.

"Our world of agriculture has embraced online selling - it had been simmering away for 35 years but in the last 18 months we have seen a dramatic uptake," he said.

"We have had a see-sawing wool market in the last 12 months but it has been on the rise again," he said.

"They (growers) are still getting $2000 or better for a bale of wool and the returns for lambs and breeding ewes are exceptional, so it justifies that an investment in good genetics."

He said the improved seasonal conditions across much of the pastoral area would help underpin high clearance rates at on-property sales and also see some large orders for private selection rams, which had been limited in the past few years.

"Producers with sheep are in it for the long haul and are geared to handle the seasons and manage their flocks better than ever," he said.

Mr Wood and Mr Wetherall say the cancellation of the Australian Sheep & Wool Show in Bendigo, Vic, and South East Merino Field Day at Keith is a blow to the industry, but the biggest impact could be on top-end stud rams.

"We normally see NSW and even WA looking at the stud rams on offer in SA and attending these field days. Unless they can see these rams at some stage they may not bid to the prices they may have," Mr Wetherall said.

Merino SA president Joe Dahlitz said he was quietly confident that ram sales could eclipse last year in both average and clearance rate.

The gross margins of a self-replacing Merino flock are as good or better than any other sheep. - Joe Dahlitz, Merino SA president

"Wool prices are 500 cents a kilogram to 600c/kg above this time last year and lamb and mutton prices are pretty good, so the gross margins of a self-replacing Merino flock are as good or better than any other sheep," he said.

"Most parts of the state have had reasonable rains and while there is not a lot of feed because it has been that cold, we should have a fair bit of tucker in 3-4 weeks' time."

Glenville at Cowell and Babirra at Stansbury are both celebrating their 60thannual sales next month.

Babirra stud principal Craig Farrow says it has been rewarding to see their long-standing clients coming back each year, some for three generations of the one family.

"Some of my kids are interested in sheep so hopefully it continues for many years to come," he said.

Also among their highlights over the years were selling a ram to Argentina when they were a vendor at the Adelaide Merino ram sale, and in 1991 the governor at the time, Don Dunstan, attended their on-property sale.

The Farrows commenced selling Poll Merinos in 1961 and have built a clientele stretching from the high rainfall areas to pastoral country.

They were the first registered Dohne stud in SA, adding the dual-purpose breed to their catalogue since 2001.

Mr Farrow says their aim is to breed an easy-care, hardy animal with good wools and carcase that does well in all seasons.

"You are not always going to get the perfect season so we are trying to breed sheep that keep the dirt out and do well when conditions are not ideal," he said.

"You have to have a little bit of nourishment in the wool for when conditions are dry but in the high rainfall areas what goes in the top (rain) needs to drain out."

Babirra will offer about 80 Poll Merino and Dohne rams in their auction on Tuesday, August 17.

Mr Farrow says they have already had interest in both breeds and is "optimistic" of a good sale in their milestone year.

"The wool market went down last year but ever since then it has kept rising so many people have had some pretty good wool prices, and they have finally had some rain in the pastoral country which should help, some have done it pretty hard," he said.