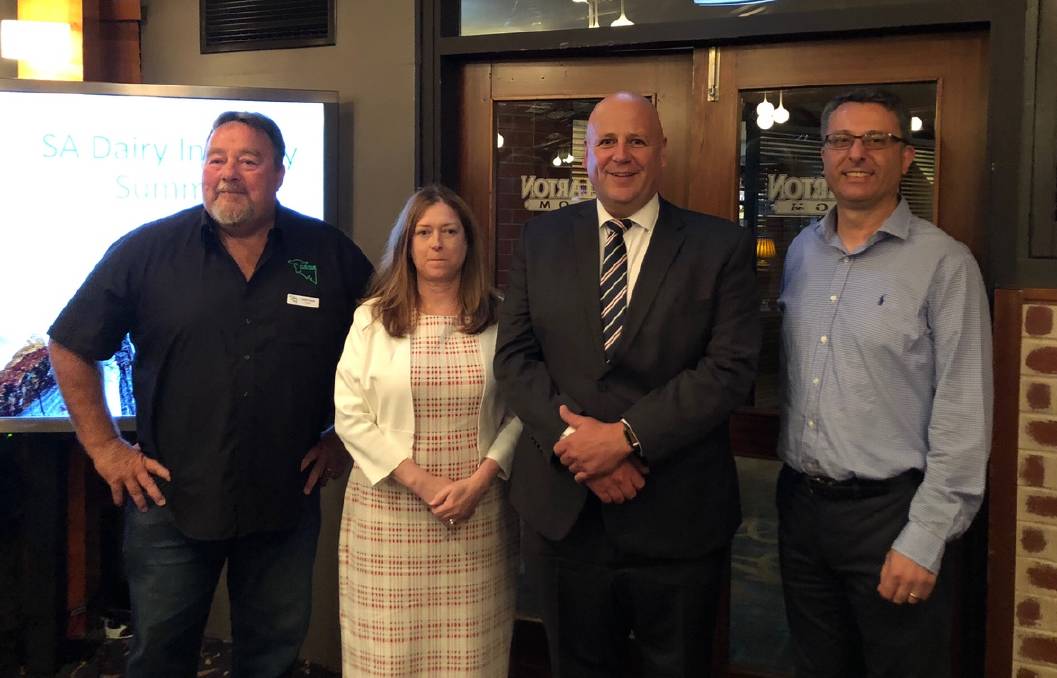 THE SA dairy industry is continuing on its path to a stronger and more resilient industry, holding its second SA Dairy Industry Summit, as part of the five-year industry action plan.

THE SA dairy industry is continuing on its path to a stronger and more resilient industry, holding its second SA Dairy Industry Summit, as part of the five-year industry action plan.

After initially setting a target to grow dairy production and processor capacity by an extra 200 million litres of milk a year, the summit was a chance to check in on progress made after the first summit and identify further challenges that could limit growth.

SA Dairyfarmers' Association president John Hunt said the first summit had succeeded in getting the full supply chain in SA onto the same page and tackled other "low-hanging fruit", such as ways to improve confidence, but the next stage would be tougher and likely involve working with government to succeed.

"Confidence is something that is simple to prove, and the industry is in a good place," he said.

There was a consensus from those attending that SA could not compete in a commodity market, so emphasis would need to be placed on presenting its products in the premium space.

Some of the topics highlighted during the day were labour shortages - which particularly came to the fore during the pandemic - and succession planning, both for individual farms and for the industry at large.

"We need to promote dairyfarming and share that it is a good industry to be involved in and you can come up the ranks," Mr Hunt said.

One action from the summit will be identifying where specific labour gaps sit and then determining how to approach the issue, including education, recruitment or reducing the red tape involved in skilled worker visas.

Another topic that came up was the importance of the industry "telling its own story", prompting discussions about the high animal welfare and quality control efforts that are involved in the industry and opportunities to share this message with consumers.

On the topic of telling good stories, the issue of climate change was also raised, with the potential for carbon neutrality, and associated marketing, among the options.

Mr Hunt said there were already projects being done through SADA and Dairy Australia to help measure how the industry was faring with their emissions, and benchmarking would be an important tool in determining the industry's next step.

The SA Dairy Action Plan has already made some strides forward in addressing some of the issues raised, with a new trial to begin shortly to help prove the SA dairy industry's quality credentials are as good as it claims.

In the past week, the SADA has confirmed funding and the participation of two local processors for a short "proof of concept" trial using blockchain technology.

SA Dairy Action Plan officer Ashleigh Pulford said the issue of traceability and provenance was a big topic at the 2019 Dairy Industry Action Plan summit, particularly based on concerns from overseas markets.

"Consumers, especially overseas, felt they couldn't trust where the products actually came from," she said.

To help build that trust, SADA has partnered with Entrust, a SA company that has been working largely in the wine sector on traceability.

SADA then spent four months last year mapping the entire SA supply chain, from on-farm to when the consumer buys it.

"It's a proof of concept to look at can we trace milk from a cow to a two-litre bottle or block of cheese in the supermarket," she said.

She said the data required was not new, it just needed to be collated.

The trial is expected to take about six weeks, and will likely begin next month.

This was not the only outcome to emerge since the 2019 summit, with work towards improved access to educational courses, both for those working on-farm and in the processing sector, also on the way.