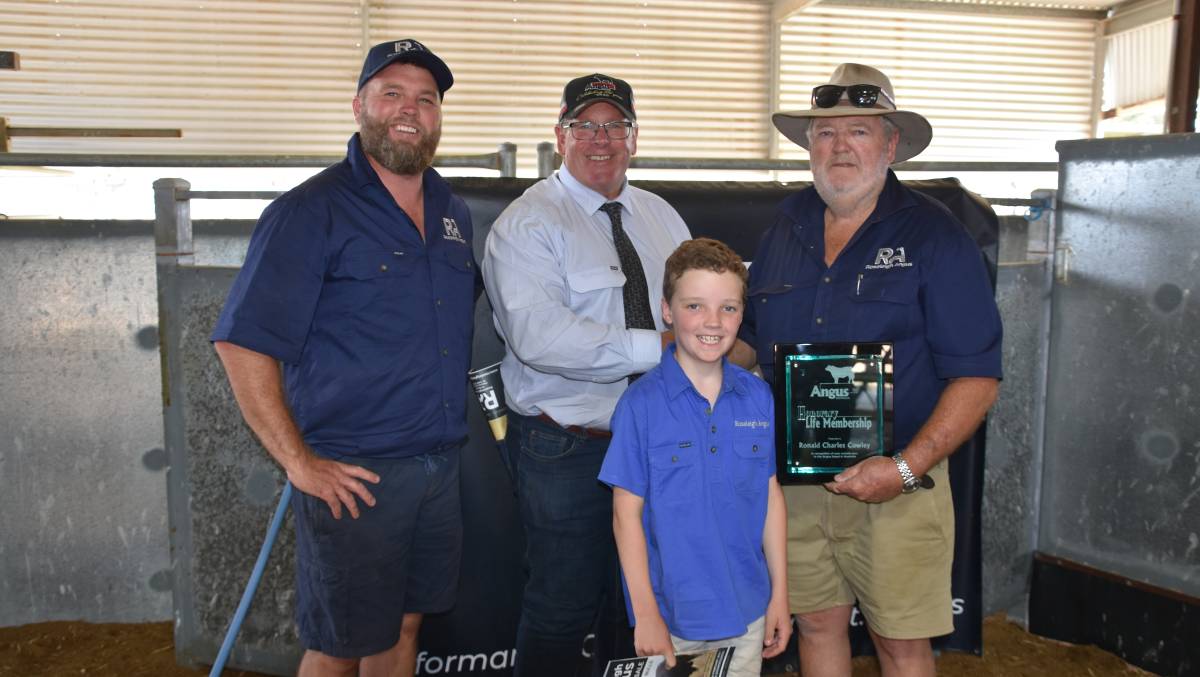 Ron- who runs the Roseleigh stud with his wife Judy and son and daughter-in-law Mat and Julie - was presented with the award by Angus Australia president Sam White at the stud's annual sale at Keith this week.

"I was blown away. I was pretty proud when Dad got one (in 1987) for all that he did but I never thought that I would ever get one (life membership) myself," he said.

"The highlight personally for me was to get the life membership at the bull sale. The prices that followed are the sort of prices you don't even dream about."

Ron's contribution to the breed on committees spans nearly 40 years, serving on the state committee from 1982 until 2019, as well as a decade as a director on the federal board between 1988 and 1998.

He said the life membership had come as a huge shock but had capped off an "unbelievable" few months with 2020 the family's best harvest and then a sensational bull sale where all 33 bulls topped at $20,000 and averaged $13,272.

This sale average was more than double last year's result.

Roseleigh is one of SA's oldest Angus stud, established in 1954, by Ron's father Charles.

It was the first stud in SA to hold an on-property auction and won many broad ribbons at the Sydney Royal Easter Show, Royal Melbourne Show and Royal Adelaide Show during their days showing.

During his time on the federal board Ron helped drive many changes, including the formation of the National Show & Sale in Wodonga, Vic,- which he was chairman of for three years - and the Angus Australia office relocating from Sydney to Armidale, NSW.

The Angus breed has been very kind to us. I like the cattle and I like their doing ability, they have kept us going through some tough times. - RON COWLEY

Over the years Ron has freely offered his knowledge to the industry, mentoring young breeders in the breed. Roseleigh has also provided many steers to schools for the Royal Adelaide Show led steer program.

"When I am asked to speak to students one of the main points I try and push is that you have to present yourself to the best of your ability, if you are leading one of our steers I expect it to be presented well but you also have present yourself well," he said.

"It doesn't matter what it is in life you need to show up and present."

Ron says it has been tremendous to witness the rise in popularity of the Angus breed in Australia's beef industry.

"The Angus breed has been very kind to us. I like the cattle and I like their doing ability, they have kept us going through some tough times," he said.

"They have been a source of income in years when we have not been able to grow crops and while cropping returns may be more one year the next year the cattle may knock it off."

Angus Australia SA branch president Brad Lucas said Ron had proven to be "one of the most devoted and credible supporters of the Angus breed."

"With over 30 years of commitment to promote the Angus breed on a State and Federal level, Ron has been a strong pillar of support during trying times," Mr Lucas said.