Heavy feeder steers may have been back at least 10c/kg at the final Naracoorte weaner sale for the season but light weight steers took another jump selling to $5.52/kg. 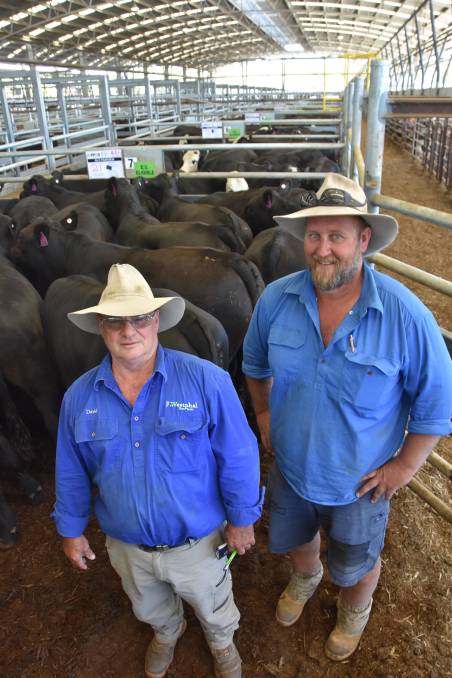 Prices for heavy feeder steers at the final Naracoorte combined agents' weaner sale for the season last Thursday were back at least 10 cents a kilogram on the spectacular early January sale.

But light weight (300-350kg) EU Angus calves soared even higher than the previous Naracoorte sale, selling to a $5.52/kg high.

The 3721 head steer yarding featured some outstanding weight for age weaners, a reflection of the genetics and the sensational spring.

It was a more mixed quality yarding though, including more pens of spring 2019 drops than the previous sale.

The March/April 2020 drops which had been weaned for two months sold to AuctionsPlus who were again interfacing the auction.

F Westphal Nominees, Old Fairview, Woolumbool, had an outstanding run of 289 EU, Angus and Black Simmental-Angus which were weaned in December.

The February/March 2020 drops which were sired by Nampara,JB Angus and Woonallee Black Simmental sires averaged a sensational $1820.

AuctionsPlus was one of the sale's big bidders buying nearly 15 per cent of the yarding (550 head).

The online platform was also underbidder on another 13 per cent, with three active bidders from SA and Vic.

"I bought similar (weight) steers before Christmas for a bloke for $4.30/kg and these made $4.80/kg so it's up 50c/kg on before Christmas," Spence Dix & Co's Craig Escott said. He was Oakley Farms agent.

It was the first time Mr Dawes has sold in the Naracoorte weaner sales, normally holding onto his steers until at least 12 months of age, but this year he decided to take the money early.

This included $5.27/kg for their lightest pen weighing 318kg.

Fourteen Angus steers from Stewartdale, Naracoorte, made $1950. These weighed 416kg.

Engler Enterprises, Maaoupe and Beachport, who topped the annual mated heifer sale the previous week at Naracoorte, were also among the top c/kg rates with $5.46/kg for 25 Angus weighing 323kg.

NSW based commission buyers Duncan Brown and Andrew Lowe left their mark on the sale with cattle heading as far north as Tamworth.

SEJ Leongatha were also active for backgrounders in the Vic Gippsland but local demand remained strong.

Naracoorte combined agents chairman Will Nolan said prices were back 10- 20c/kg on heavy steers compared to the early January sale, although most still sold for $4.40/kg to $4.60/kg.

"Having said that many of those steers 420kg or more were spring 2019 drops so they were six months older which may have influenced the bidding," he said.

"It was still one of those sales if you didn't have $1500 for a steer you didn't buy a steer. The buyers had forgotten about cents a kilogram on the light end."

Mr Nolan- an agent for Southern Australian Livestock - said it had been an "extraordinary" selling season and buyers had "got their heads around" the new price levels.

"The goal posts have moved, hopefully the goal posts stay where they are at the moment or there could be a lot of expensive cattle that have been bought.

"The problem is we've been there before and it was not that long ago you were buying cattle for $4/kg and 12 months later you made $100 and that was gross."

Mr Nolan did not foresee prices coming back anytime soon while there was an insatiable demand for cattle from the eastern states.