STEER prices at the opening Naracoorte weaner sale for 2021 were 20c/kg or more higher than the December sale. 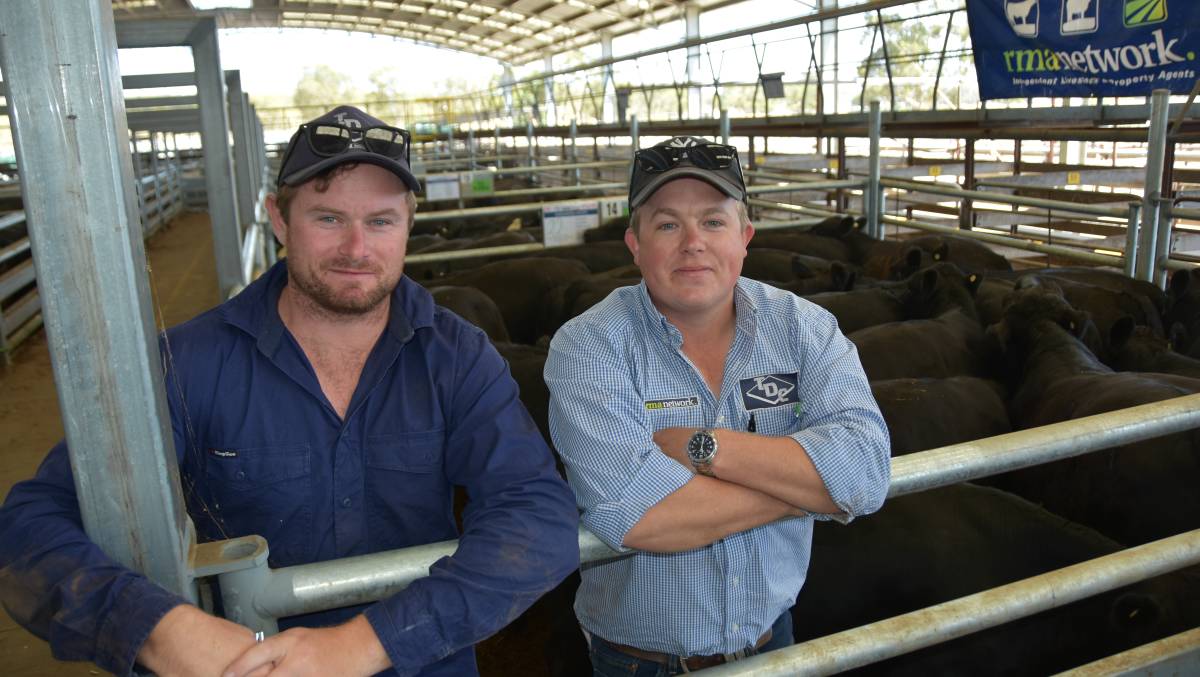 PRICES at the first Naracoorte weaner sale of the year shot into the stratosphere with the crowd marvelling at what they were witnessing.

Records tumbled in the December sale at the same venue but many pens in Thursday's sale were 20 cents a kilogram-plus dearer than that sale, in line with this week's Western Vic weaner sales.

There was plenty of weight in the yarding with most steers over 350kg, attracting plenty of feedlot interest, as well as backgrounders and some Vic and NSW interest.

Many long-time vendors breed outstanding weaners specifically for the feature sale, but this time the sale high of $2141 was an impressive pen of 20 450.7kg Angus from Boonderoo Pastoral Company, Conmurra, which made $4.75/kg.

The Seears family usually grow their weaners out on bean stubbles and then sell them direct to feedlots, such as Princess Royal, Burra, but Lachie Seears said they were enticed to sell their 10-11 month-old weaners in the Naracoorte yards on the strength of the market.

"We looked at the market and saw how red hot it was, we've still got 6500 lambs to put on beans so we decided to cash the cattle in early," Lachie Seears said.

"We have built a business where our enterprises don't change too much but we are nimble enough that we can adapt things a bit if we see an opportunity rather than doing the same thing every year."

"We don't normally come and watch our cattle sold in the yards as I've always been told that they don't make any more money just because you do, but I'm glad we did come today," he said.

"Dad has been doing this for 50 years and he has never seen this.

"We're really happy with how this has gone but who knows if we will do it again next year."

They sold calves from their Springbank property at Naracoorte in the December sale averaging $1665 for them, but Mr Johnson said prices were up about $100-$150 on that sale.

The tops of the Johnsons' Granite Ridge and Boonaroo-bld Angus, 37 weighing 433kg made $2010 to Thomas Foods International, while the tops of their Simmental steers, 25 weighing 419kg made $1900.

Other volume buyers included TFI with about 300 EU-accredited cattle and Hopkins River Beef with 239 head.

"Given what we had heard from the western District sales we had hoped the sale would be strong but you can never just expect it," he said.

Mr Nolan said the market had hit a "new level" and buyers would be hoping these high prices continued.

"We have seen for a while now the processors who have the ability to feed and background cattle have been buying cattle at these sort of levels," he said.

"When you get them doing that it gives everyone else confidence that everything is okay."

Thomas DeGaris & Clarkson director Darren Maney praised the exceptional quality yarding, describing them as some of the "best bred cattle in Australia".

But he also cautioned how sustainable the dizzying rates being paid for weaners this week were.

"The scary part is that it is only grass driven, the end commodity prices don't back it up," he said.

"All year (2020) the bullock fattener was able to sell bullocks for $2600 -$2800 and replace them in the same market for $1700-$1800 and while the margins are not quite what they have been some years there is a margin there, but yesterday with the latest 25c/kg rise all of a sudden if you are paying under $1800 you are buying a pretty ordinary animal.

"It has blown it out of all common sense."

Mr Maney said Australian cattle prices were well out of kilter with the world market.

"We are seeing cattle in New Zealand making dressed (c/kg) what we are getting here live weight," he said.

"The processing sector have been trying to get prices back most of last year but every time they try it rains somewhere."

Mr Maney noted a 15c/kg premium on EU calves above 370kg but this said was not evident on 320kg calves, many of which were bought by NSW commission buyer Duncan Brown.

Another 3000 steers and 1200 heifers are expected to go under the hammer at the next Naracoorte weaner sale on January 21 and 22.