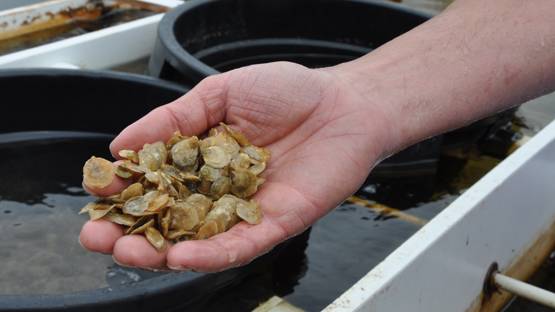 THE SA oyster industry will have greater security of its spat supply with a hatchery officially opened at Boston Point on the Eyre Peninsula.

THE SA oyster industry will have greater security of its spat supply with a hatchery officially opened at Boston Point on the Eyre Peninsula.

The Yumbah Hatchery is a $1.35 million expansion of existing abalone farming facilities as part of a partnership between local aquaculture operator Yumbah Aquaculture and Tas-based oyster spat producers Camerons.

The project, which is expected to support 248 jobs, received $250,000 in state government funding to help with infrastructure construction, including new nursery sheds and raceways, grow out ponds and associated equipment and site development.

The state's oyster industry was put under pressure following an outbreak of Pacific Oyster Mortality Syndrome in 2016 in Tas led to a halt on spat oyster imports into SA.

Since then, SA has been working to shore up its own spat production.

"This is a significant turnaround for the industry, which more than four years ago were grappling with a severe spat supply shortage," he said.

"We are committed to supporting our oyster growers rebuild and recover."

He said this move would help strengthen local spat supply and protect the industry against future shortage risks.

"We now have a local oyster industry that is essentially self-sufficient in terms of spat supply, supports jobs in the region and provides choice of supplier for local oyster growers," he said.

"The success of this project is testament to the resilience, expertise and adaptability across the industry and I congratulate Yumbah on their vision."

Member for Flinders Peter Treloar praised Yumbah Hatchery on their success, with the Point Boston facility able to meet about two thirds of the state's oyster spat needs.

"The oyster industry is a valuable contributor to the EP economy and the completion of this expansion is a welcome boost," he said.

"This is not only great news for local employment opportunities, but it also provides choice and bolsters the security of locally-grown spat supply to SA oyster growers to protect against future biosecurity risks."