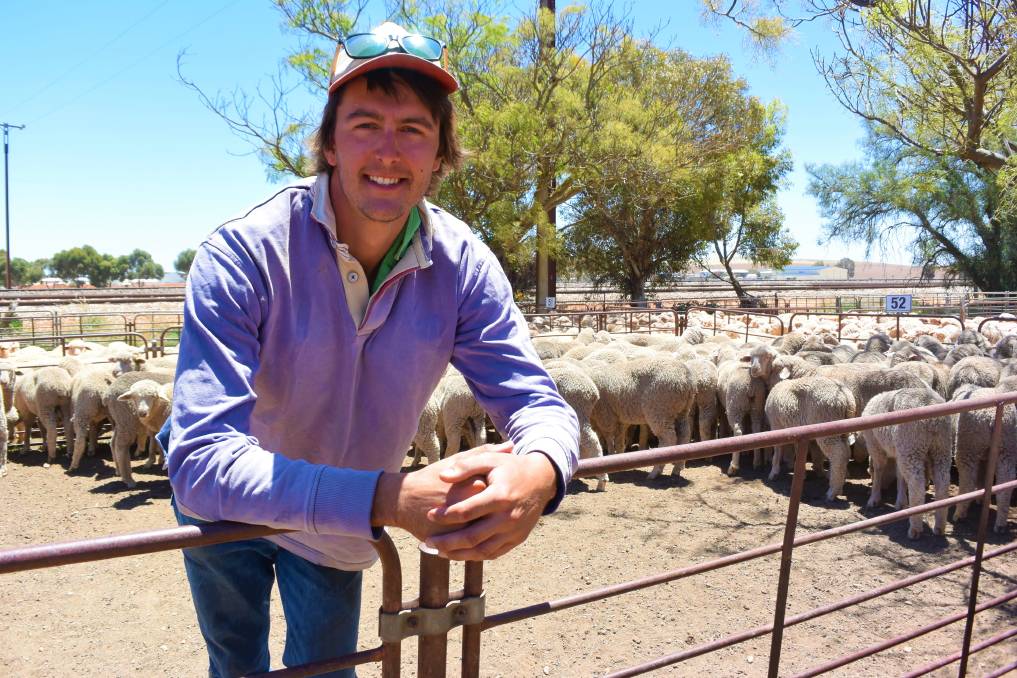 UTILISING FEED: Brinkworth mixed-farmer Alex Kreig snapped up a heap of lambs at Jamestown's final market of the year to make use of spilled grain on the family farm.

SHEEP and lamb markets are as buoyant as ever, with an even spread gallery of restocker, opportunist, processor and feedlotter buyers helping to push prices up into big gains territory.

SHEEP and lamb markets are as buoyant as ever, with an even spread gallery of restocker, opportunist, processor and feedlotter buyers helping to push prices up into big gains territory.

After a fair bit of rainfall arrived across the country and a couple of impressive industry survey figures showed sky-high confidence in the years ahead, the sector's confidence is certainly evident.

Elders Jamestown agent Scott Fleetwood watched the bidding closely at Jamestown recently and said many orders simply went unfilled, as buyers from across the state attempted to secure what they could prior to the Christmas break.

"It has been a wide range of buyers and the demand has been solid all the way through the back end of the year.

"I expect that going forward - into January and February, there will be plenty of demand for lambs."

Opportunistic buying to take advantage of stubble and excess grain from damaged crops has helped prop up lamb prices of late, Mr Fleetwood says, so a lot of sellers could not have picked a better time to off-load lambs.

"There is plenty of demand and most importantly - space," he said.

"A few clients attended the last market to just buy and tidy up paddocks - they have not run sheep for a really long time.

"Producers are happy to pay a bit more and take a punt to get the return at the other end."

In a recent Meat & Livestock Australia/ Australian Wool Innovation sheepmeat and wool survey, there will be approximately 13.1 million lamb sales throughout the summer months.

Looking at producer intentions, the survey also indicated that in the next 12 months, 95 per cent of sheep producers intend to increase or maintain their flock numbers.

Of the 51pc of producers who responded that they plan to increase their numbers, 55pc said they planned to retain more replacement ewes, 39pc will retain more older ewes and 30 pc will buy more additional ewes than usual.

Nutrien Ag Solutions Jamestown auctioneer Shannon Jaeschke said the sector was probably experiencing a bit of a glut in lamb supply - as a result of this, Mid North sheep sold even better.

"There has not been the bulk of lambs this year, so prices have been solid but yardings will rise again February."

A few additional lines of lambs hit the market at the end of the year at Naracoorte and Jamestown sheep markets - with producers taking the price on offer instead of carrying lambs through.

"The store prices have been too good for some to warrant the cost of feeding," Mr Jaeschke said.

RELATED: Woolmark reunites with Shaun The Sheep for Christmas

EXCESS grain and rejuvenated pastures have provided mixed-farmers with an incentive to stock a few extra lambs on paddocks this year and despite the outlay for lambs being a bit difficult to reason with, many are taking the opportunity.

Brinkworth mixed-farmer Alex Krieg joined in on the bidding battle at Jamestown final market of the year to secure lambs.

He bought a run of 130 woolly Glenville-bloods from L&SL Nutt, Quorn, at $156, and that figure was about the maximum Mr Krieg was going to pay.

"What we paid was probably the limit for what the lambs are. The price was up that market because a lot of croppers were doing the same thing.

"We bought some lambs in October too but market prices were down a bit at that stage. Now everyone is chasing sheep because the feed and spilled grain is there."

The family farm runs about 300 breeders but the operation is mainly cropping, so growing out lambs will help recover some of the crop losses caused by wind damage.

"Generally we buy lambs but in the past few years we have not. Cropping has been sufficient and the prices were almost to high," Mr Krieg said.

"But this year we were hit with bad weather just before harvest - we have a lot of grain on the ground as well as a fair bit of stubble.

"We want to make use of the paddocks rather than just take it as a hit this year."

Mr Krieg said the additional lambs will also help with other input costs.

"It will ease the pressure on chemical usage by running lambs over a few weedy paddocks - a lot of those inputs have gone up in the past few years. "Even if lambs are expensive, the gain at the other end is there.