The demand for Christmas trees has failed to wane. THE demand for Christmas trees has failed to wane this year, after the mammoth selling season in 2020.

Many vendors say the bulk of their orders came in November, with some even sold out already.

"Last year we sold out by early December, so this year we decided to spread out our sales, cutting trees at staggered times to stock back up every day and give everyone a chance to buy one," he said.

"It has meant our selling season has also finished earlier."

A Christmas tree, generally the Pinus raditata variety, grows about 30 centimetres a year.

Mr Roberts prefers to sell his once they reach 1.8-2m tall.

"Otherwise they just get a bit too heavy for one person," he said.

"People do ask for bigger trees, but then they have to pay that bigger price as they take longer to grow, and it's not really a risk we want to take. We like to keep our prices reasonable."

Mr Roberts has been selling a "few hundred" trees a year out of a depot in Verdun for the past 15 years.

He sources his trees from the Adelaide Hills and the South East.

"We started off selling from our driveway in Aldgate, but then it just got too busy," he said.

"We have had some regular customers that have been buying from us all that time.

"It is such a family event for some, with the big decision of who is going to pick the tree. Some like the big bushy trees, while others like the ones with more definitive branches to hang ornaments from.

"That's why a lot of people like heading out to see the trees' character for themselves." 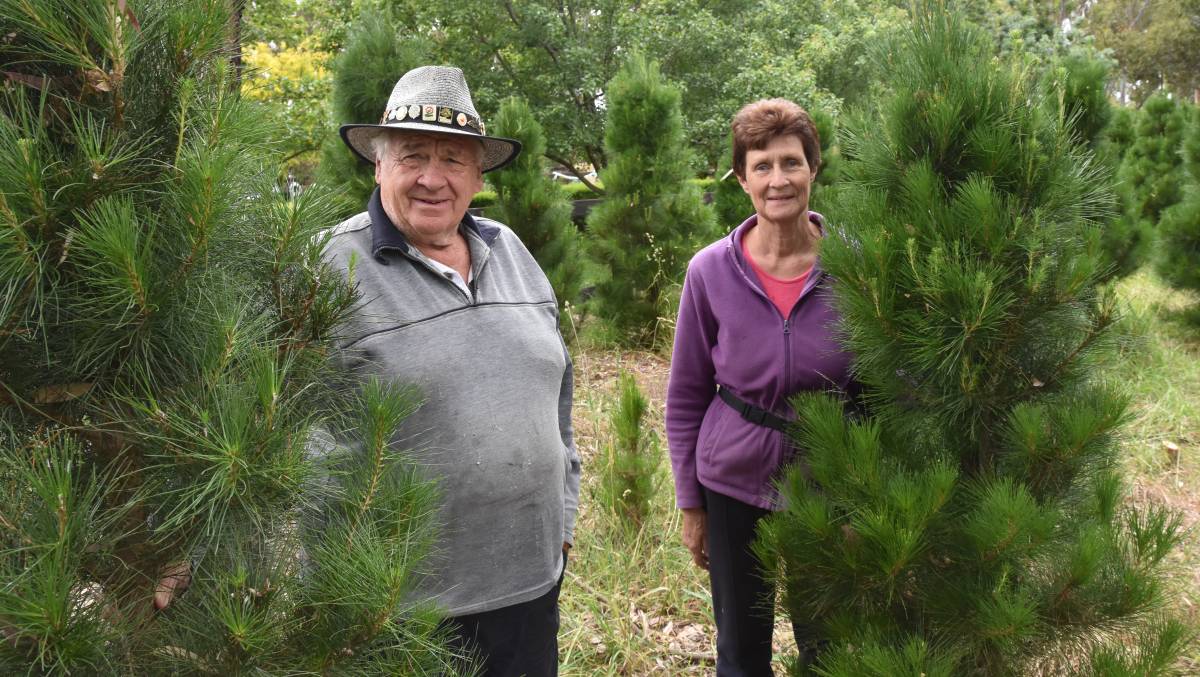 HOLIDAY HOBBY: Trevor and Heather Schmidt have been growing and selling Christmas trees on their farm at Bugle Ranges in the Adelaide Hills for 20 years.

"The rush was aided by other Christmas tree vendors selling out very early, which put a lot of pressure on us," Mr Schmidt said.

"Then when people would get here, they would be getting on the phone to tell others about our trees - one of the weekends almost killed us.

"But we're also lucky here, because if we don't sell them all, we can just keep them in the ground, plus we like to look after our loyal customers.

The couple have been growing Christmas trees at Bugle Ranges, near Mount Barker, for about 20 years, inheriting the 1.5-hectare business from the property's previous owner.

"Initially we weren't interested in growing or selling the trees," Mr Schmidt said.

We really enjoyed the joy we saw on the children's faces, it made us feel good, so we decided to give it a go. - TREVOR SCHMIDT

"But when we started selling off the trees that first year, we really enjoyed the joy we saw on the children's faces, it made us feel good, so we decided to give it a go.

"We still only consider it a hobby. We love it."

Mr Schmidt said they lost 12 months of growth because of their indecision, but have been growing them ever since.

"Because we keep ours in the ground, we have varying heights, depending on the demand," he said.

"But we prefer to sell them before they need too much pruning."

Mr Schmidt said they have loyal customers that have returned for nearly 15 years.

"The weekends are busy, but we also get a little rush around 4pm just after school."

The Schmidts opened their farmgates in November and plan to sell up to December 23, depending on stocks.