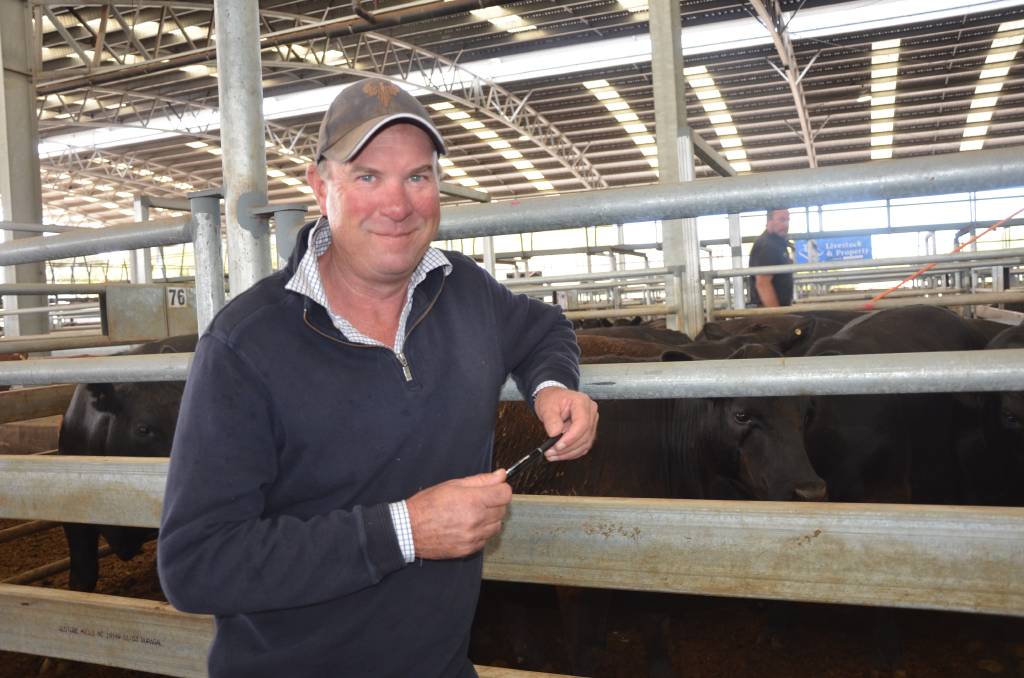 BIDDING competition at the Naracoorte Christmas weaner cattle sales this month is expected to be fierce and prices are tipped to be in favour of the vendor, according to stock agents.

BIDDING competition at the Naracoorte Christmas weaner cattle sales this month is expected to be fierce and prices are tipped to be in favour of the vendor, according to stock agents.

A considerable hike in prices for good weight for age weaners suited to the feedlot sector will most likely attract solid returns, with interstate bidders in particular expected to dominate the sale buoyancy.

It is no secret that sourcing cattle this year has been tough going but Penola producer Allan Kain was hopeful he would be able to secure enough numbers in the coming sales.

Mr Kain runs a steer fattening operation with his family and after having difficulty buying Angus cattle throughout winter, he needs a couple of hundred steers this week to keep his numbers up.

"We mainly source Angus cattle but this year we had to buy in a few other breeds to make up numbers," he said.

"There are certainly some impressive young cattle at the moment. Which is a bit surprising because the season has not been the best."

Mr Kain needs a couple of hundred cattle a month and will attempt to source cattle that have been weaned for two to six weeks, at about 300-360 kilograms.

"I expect I will need to compete with a couple of interstate buyers, they might source a few thousand and probably in the weight ranges I will be operating in.

"We generally hold onto cattle for about 12 months. Depending on the season, it could be longer and at this stage I am still not sure what we will look at doing."

TDC will offer more than 1200 weaners but the Upper South East in particular does not have a lot of carry over feed after an average autumn, so, demand could be slightly backed off, according to Mr Maney.

"The traditional cattle areas are still strong but some producers might wait until the January sales to buy because it will give feed a chance and harvest will be over," he said.

"Initially, NSW buyers were expected to buy up big at these sales but the floods have changed this a bit. If the water subsides quickly, then there will be plenty of producers needing stock."

Mr Maney said January sales could attract more demand and stronger prices as a result of this.

"Locally- based competition will be strong and whilst we expect the sale to be really good, it is always an unknown."

Nutrien Ag Solutions Naracoorte agent Brendan Fitzgerald said the agency would offer a solid run of steers and heifers this week, with a regular vendor offering about 650 steers.

"We are expecting a few orders from NSW but there is a good belt of feed from Kingston SE to Gippsland, Vic, so the demand for lighter steers will definitely be there.

"The NSW situation might take a few weeks to come into effect though, so many will probably act on the side of caution and boost January sales with increased inquiry."

Processor feedlots such as Thomas Foods International, Teys and JBS Australia will operate on weighted calves, according to Mr Fitzgerald.

"Local backgrounder demand will cause the processor feedlot buyers to bid pretty hard because they will need to replace numbers - it is important to not forget how an opportunist buyer can effect prices too," he said.

European Union Accredited calves will attract a premium, with lighter calves making between $6.20-$7.50 a kilogram.