Despite harvest only just kicking off for some this week, the progress may be short-lived as more rain is forecast for the weekend and even into next week. 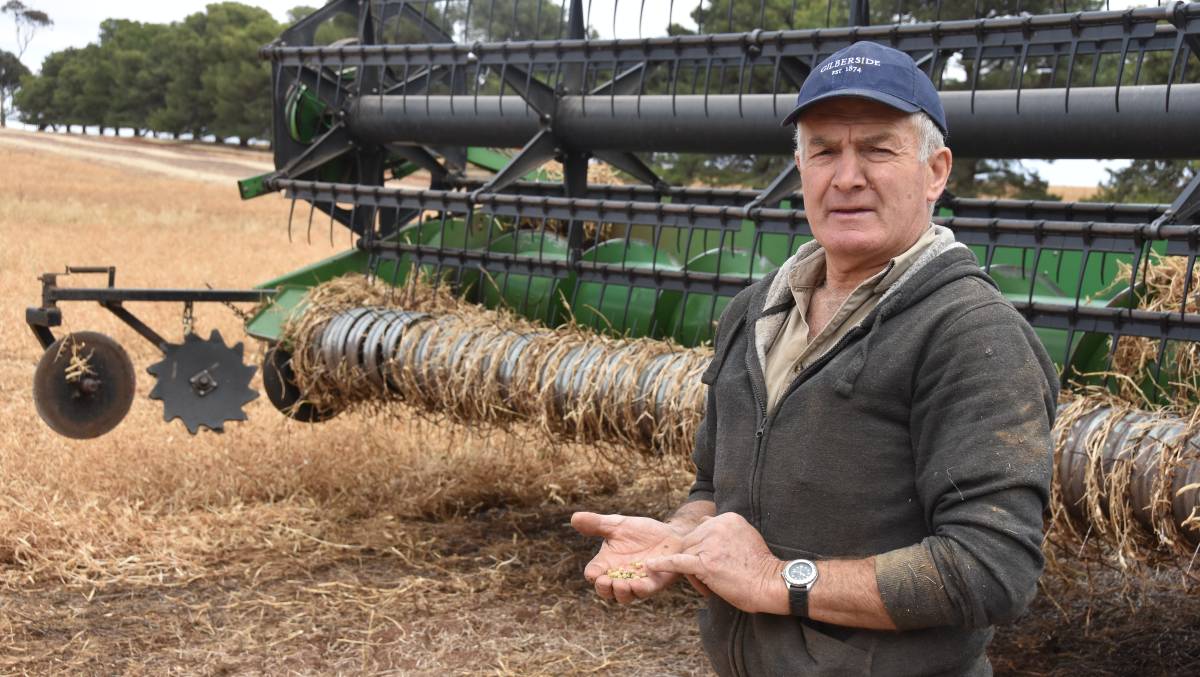 DESPITE harvest only just kicking off for some this week, the progress may be short-lived as more rain is forecast for the weekend and even into next week.

Bureau of Meteorology duty meteorologist Tina Donaldson said strong winds were expected today (Thursday) ahead of the front, with showers and thunderstorms forecast for the South East and western districts.

"The next big system is on Saturday, when a complex low will move across from the west, bringing heavy rainfall (20 millimetres to 40mm) for parts of the state," she said.

"That will move across to the eastern states on Sunday, but there may be more rainfall coming again by Tuesday as another system moves across."

The bad news comes as up to 50mm fell last weekend in some parts of the state.

It's a frustrating blow for graingrowers eager to get ripe crops in the bin, with harvest already more than a fortnight behind, due to the late start and recent rains.

It has been a very frustrating start to harvest. - AARON OAKLEY, Pinnaroo

Crop Smart Pinnaroo's Aaron Oakley said what had been delivered into local silos so far had been of very good quality, particularly barley. He was hoping this coming weekend would not cause too much damage.

"We are having an alright season considering, the quality so far has been really good," he said.

"We had some frosts, but nothing too severe, and we managed to dodge any of the recent hails events. But if this weekend's rain is big, we may start to see some damage.

"It has been a very frustrating start to harvest."

Mr Oakley and his family are harvesting lentils, with plans to start on Compass barley this week.

"While the spreads between feed barley and malt barley are only going to get wider, particularly after the issues in NSW.

"So this year you can afford to drop back a little on yield, as we should still end up as good as last year."

Eyre Peninsula farmer Mark Modra, who crops canola, wheat, lentils and beans from Greenpatch to Yeelanna, also planned to start his harvest this week, once the crops dried out.

He said harvest had started near Yeelanna and in regions further north, but last weekend's rain had put a halt on all headers.

"We were lucky to only get 10mm at Port Lincoln, while 20mm fell at Yeelanna, and the tallies grew the further north you go," he said.

"We have some ripe crops, so there are sprouting and mould concerns, but we will only know the damage once we get started.

"We have also lost some crop through the severe nature of the weather fronts that have been through, but were lucky to have missed the hail events, unlike farmers through Wharminda, Murdinga, Cleve area, where there was a fair bit of damage to canola and barley."

Mr Modra expects country south of Edilillie to have below average yields because of too much rain in July, then none in spring.

"But on the good country around Yeelanna and Cummins, the crops may be average to below average for canola, but possibly above average for wheat, while lentils should be about average," he said. PUSH ON TO FINISH BEFORE CHRISTMAS

"Normally we would be halfway through our harvest by now, finished by the end of November," he said. "This year we will be lucky to finish before Christmas."

"I also put in a bit of oaten vetch hay, but I couldn't sell any, so now my sheds are full," he said.

He said any rain from now on would be damaging to his crops.

"We had 40 millimetres last week, but thankfully it was windy soon after, so that saved our bacon," he said.

"We were also lucky to miss the devastating hail that hit 10 minutes downs the road, but if we have prolonged wet weather with no breeze, that's when the crops start to sprout."

Mr Hill started his harvest on peas, which were yielding up to 2.5 tonnes/ha, but were about 10 per cent to 20pc frost damaged.

He also had about 200ha of barley ready to go.

"So the 5-20mm coming this weekend is concerning," he said.

"But my biggest worry is how much frost damage I have.

"We have been fairly badly frosted, particularly on our river flats - from 30pc up to 100pc loss.

"I could have cut a lot of frosted crops, but there was no point because there's no demand. There's a lot of hay stacked out in paddocks at the moment with nowhere to go."

Mr Hill said the season had potential for a record year, but the recent weather brought that down to about average.