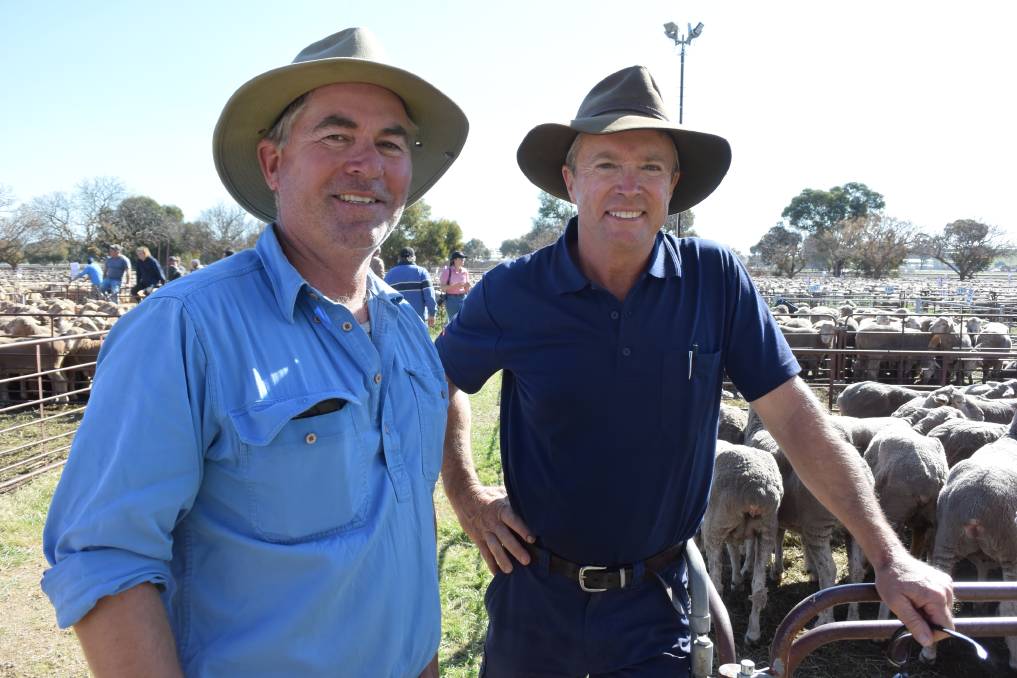 A DRAFT of weighty ewes topped the Jamestown feature ewe market at $352 on Thursday last week as restockers continued to chase breeders with good potential and weight for age and complementing well-known bloodlines.

A DRAFT of weighty ewes topped the Jamestown feature ewe market at $352 on Thursday last week as restockers continued to chase breeders with good potential and weight for age and complementing well-known bloodlines.

From the high point, prices pulled slightly back to $342 for a complete drop of 165 Glenville-blds from L&SL Nutt, Quorn, to Elders Gladstone. The June-shorns weighed 60.2kg.

Laskey Farming Trust, The Rock, via Orroroo, made $340 for their offering of 210 Flairdale-bld 2020-drop ewes.

LJ O'Dea, Peterborough, made the same return for 169 Old Ashrose-blds that had an average weight of 64.5kg and sold to Elders Maitland.

As the market progressed, buyer interest in young ewes began to fall away slightly to $336 for 170 Gum Hill-blds from CS&AM Simpson, Jamestown.

But a complete drop of 2406 July/August/September 2020-drop ewes offered by long-term seller at the Jamestown sheep market, South Gap Pastoral via Port Augusta, helped re-spark buyer interest, with the tops of the draft making $292.

With an average weight of 46.2 kilograms, the 428 April-shn Glenville-blds were bought by Spence Dix & Co Mallala.

Later in the market, 212 ewes that made $208 and averaged 34kg completed the sale of the complete drop.

About 25,000 feature ewes were offered at the market and Elders Jamestown Scott Fleetwood said it was the most even lineup yarded in about a decade.

"The quality of the stock was brilliant - each pen was in forward store to prime condition.

"It was one of the best representations of local genetics we have seen. Vendors prepared sheep really well and they sold accordingly."

The March-shorns tipped the scales at 68.2kg and Elders, Eudunda, secured the draft.

A smaller line of 47 stretchy 2019-drop Glenville-bld ewes from R&J Reichstein, Jamestown, made $320, after the 70.6kg ewes attracted attention from buyer Nutrien Ag Clare for their meaty frame.

Returns for middle-run of 1.5yo Merino ewes were a highlight at the market and were in favour of the buyer, as runs sold from $280-$320.

"A lot of those ewes made really good money even though they were lighter and not as well presented," Mr Allen said. "It was a really solid sale even though prices were slightly erratic at times."

Bidding competition helped to tip prices for 5.5yo ewes over $200 consistently, with DM Scott & Co, Clare, making $218 for 253, 83.5kg Nyowee-bld ewes that sold on AuctionsPlus.

The next Jamestown feature ewe market will be held on October 21 with about 30,000 sheep offered.