After representing SA in the Merino sheep judging at the Perth Royal Show in 2019, trainee livestock agent Cody Jones is excited about having another chance to compete on the national stage as the state champion in the meat sheep young judges. 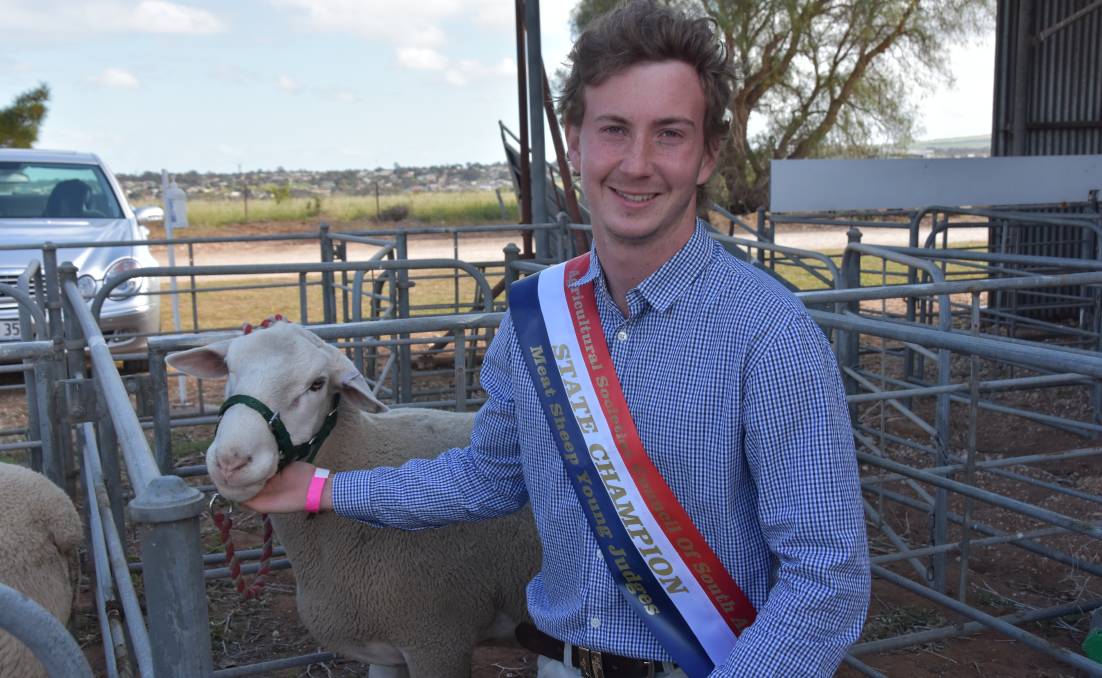 After representing SA in the Merino sheep judging at the Perth Royal Show in 2019, trainee livestock agent Cody Jones is excited about having another chance to compete on the national stage.

Next year the Burra lad is headed to the Sydney Royal Easter Show to judge meat sheep after winning the state title at the Murray Bridge Show on the weekend.

The 19-year-old was among five entrants who were all within 10 points after placing the four White Suffolk rams and was given a chance to speak publicly about his reasonings.

This is where he shone.

Mr Jones said he was looking for a "wedge shape" ram with a muscular back end and smooth through the shoulders for ease of lambing.

"The more lambs you have on the ground the more profit you are going to make," he said.

"Second to that was length and depth especially along the loin where your money cuts are."

Mr Jones says he owes a lot to the opportunities he gained from the Burra Community School's ag program, first competing in young judges competitions when he was a student there.

He says representing SA the first time in 2019 was a great experience and is looking forward to meeting the other state finalists next year.

"With two years off with COVID it is good to be back," he said.

"Meeting someone from every state and seeing the type of sheep they look for is great. It varies condition wise and every state is different."

Mr Jones's junior judging experience has also given him a perfect grounding for a career as a livestock agent.

In March he started a traineeship with Quality Wool and Livestock which he is enjoying, especially being mentored by Simon Seppelt.

"I enjoy being able to pick out livestock that are going to bring the most money for clients," he said.

"Five years ago you probably wouldn't have seen that great comparison between animals in the class," he said.

Mr Wiltshire said it was great to see the strong interest in agriculture among youth and great school agriculture programs.

"The industry needs them, there is the baby boomer bracket that are starting to get old and there has been a big gap between that bracket and what is now coming along so it is great to see there is a big abundance of young ones," he said.

It was the first time they have ever been held at a country show but came about due to the cancellation of the 2021 Royal Adelaide Show where the events are usually held.

State Young Judges coordinator Jacqueline Francis said it was tremendous to be able to hold the competitions at a central location and select winners rather than going back to previous years' competitions to get representatives.

"A big part of a country show is showing off livestock, we can have a display of them but the only way really show them off is to have a competition and for that you need a judge," she said.

"One day we may not have any of the older judges left so we need to have people with these skills coming through, one day it may be their turn to judge the sheep or the cattle."

Mrs Francis said it was pleasing several entrants who had competed at previous state championships specifically came to the show to compete in the Young Judges competitions.

"To have nearly 20 young people competing in a year where could of had none was a huge win," she said.

"Murray Bridge Show were wonderful hosts and convenor Michelle Thiele helped every step of the way but we hope to be back at the Royal next year."

The beef cattle young judges and paraders state champioships will be held this weekend at the Mount Pleasant Spring Royal Beef Exhibition to get the 2022 state finalists.