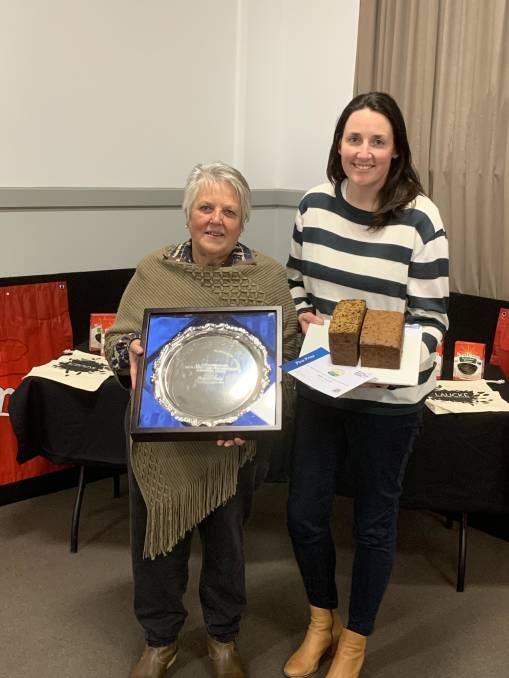 In previous years it has only been a short drive for her from her Pinery home to the Adelaide showgrounds where judging takes place each year, but about six months ago Ms Tiller and her family moved to a farm at Mindaribin, about 4.5 hours from Perth.

"When the (Royal Adelaide) show was cancelled I thought that was it and then I received word that the competition was back on so I thought 'I have to get back for it'," she said.

As luck would have it the SA-WA border was open and she was able to fly over on the eve of judging with her precious cargo, wrapping the fruit cake in bubble wrap and putting the container in her carry on-luggage.

It was Ms Tiller's second time getting her name etched on the Margaret Hurst Memorial Trophy, also winning in 2018.

She has been cooking for 25 years and entering the state championships for the past decade.

"I love the challenge of having a cake that looks good and passes the taste test, even though everyone gets the same recipe all 11 cakes are always different," she said.

Ms Tiller already has her sights on qualifying for the 2022 state finals, planning to post a cake to her mother to enter in one of the country show semi-finals.

And SA's loss is WA's gain with Ms Tiller judging the jams and preserves at the Perth Royal Show later this month.

The home economics teacher only made her first genoa cake only about four years ago when her local show was looking for entries in the class.

"I have had to search around for a good genoa cake recipe- it is quite unique to SA country show competitions but I have found one that works for my oven and taken some time to try and perfect it," she said.

"I thought it would have been nice just to get a place up against some very talented bakers so to have a win I feel pretty chuffed."

Get out to a country show coming up and have a family day in the sun and help the rural regions. - SA Country Shows president Rosie Schultz

The Laucke CWA Scone competition was won by Dulcie Barker from Yorke Peninsula.

SA Country Shows president Rosie Schultz said there was a high standard of entrants in the competition and although it was disappointing the cakes could not be displayed in the Goyder Pavilion to a large crowd of showgoers due to the show's cancellation, she said it was very pleasing that the judging was able to go ahead.

She encouraged all keen cooks to support upcoming country shows, especially those shows hosting semi finals for the 2021/22 final.

"Get out to a country show coming up and have a family day in the sun and help the rural regions," she said.

Mrs Schultz thanked long-time sponsor Laucke for generously donating boxes of scone mix to all 48 shows across the state as prizes.

"With the cancellation of some shows, we have passed the product of those shows that have been cancelled onto area schools for an inter-school challenge so as to keep the product in use and promote our event for the 2022 season," she said.

Sponsored by
SA graingrowers can pursue new market opportunities with greater confidence thanks to a new industry-led initiative.
Test
Proposed changes to South Australia's corruption watchdog would dismantle the office and rob the public of an efficient integrity agency, a state parliamentary committee has been told.
Test
The concept of registering Farm Firefighting Units has caused controversy among regional communities after the Country Fire Service last week announced a new program being trialled where registered operators would have better access to safety and insurance arrangements.
Test
A 346-hectare (855-acre) property located on the Northern Yorke Peninsula is well suited to mixed farming and has hit the market and is being offered as a whole or in two contingent lots.
Test
Seven state and territory emerging beef leaders set to take careers to next level
Test
A global shortage and drought in key production areas are helping keep lentil prices high.
Test
TOM Cosentino is proving a country background is no requisite for a successful career in the beef industry, with the 29-year-old named the SA winner of the 2021 Rising Champions Initiative.
Test
Two respected figures in SA's livestock industry have been honoured for their outstanding contributions to the red meat and livestock industries at the Southern Australia Livestock Research Council's awards.
Test