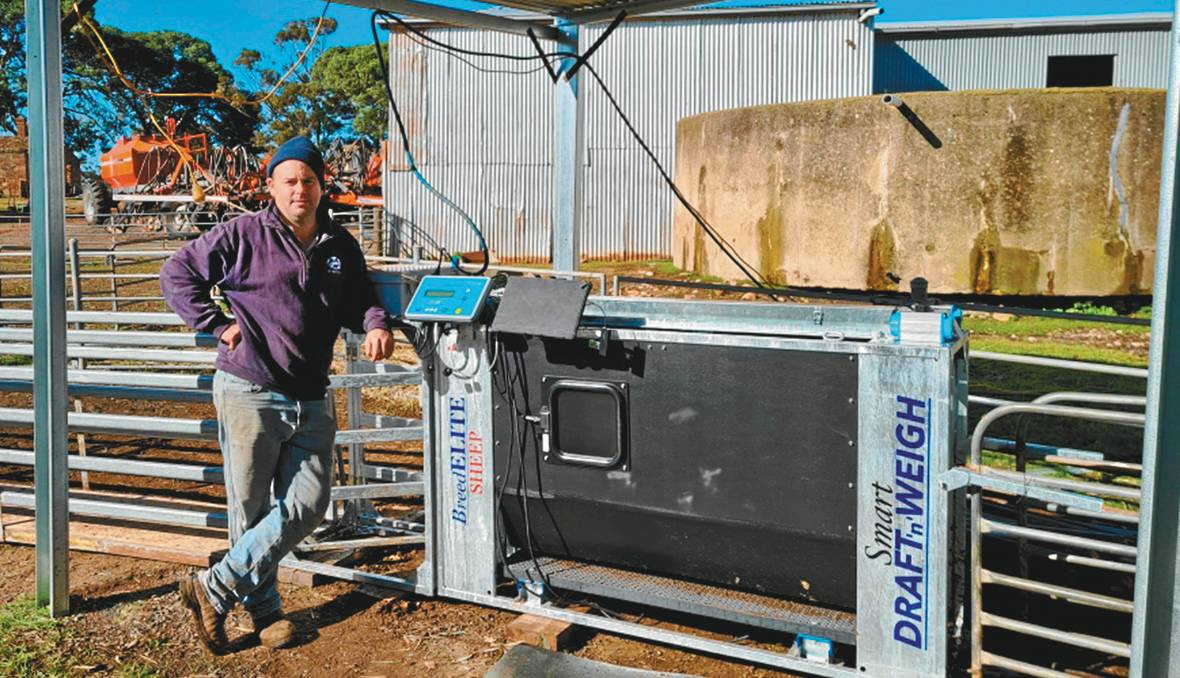 PRODUCTIVE SYSTEM: Clare Valley farmer Andrew Hall with the automatic drafter, which will become a useful tool in sire and ewe selection.

USING an auto-drafter and online performance recording system will help stud stock and commercial sheep breeder Andrew Hall select the best performing sheep easily, ensuring only the most productive and profitable sheep are retained at Wirrilla, in the Clare Valley.

Through the program, Mr Hall was approved for a portable automatic weighing/drafting system, including pedigree recording software.

He has used electronic identification ear tags for the past six years, and has been recording data for individual traits in the stud sheep for the past decade, with that data used to produce ASBVs.

The auto-drafter gives Mr Hall the ability to draft off stock efficiently, whether he's identifying ewes for a specific breeding program, using artificial insemination, embryo transfer and single sired joinings, or general recording of all the annual drops' performance traits, on the BreedELITE software system.

"We can draft animals off based on the sire that we wish to use, or the individual traits to match to a sire that complements them," Mr Hall said.

The system will allow him to record weaning weight, post weaning weight and adult weights, with the information instantly uploaded through the software program to Sheep Genetics, along with any trait data recorded from individual animals.

"All lambs are tagged with EID tags and with this program we'll be able to increase the ability to identify the lambs that are best performing," Mr Hall said.

"We just simply click a few items and we have the data in front of us.

"We can see which sires progeny are performing the best on the traits recorded."

The Halls do not join their Merino ewe lambs, but by recording individual animal performance, they can identify the animals that recover quicker after weaning and get into lamb, which backs up their strong breeding performance.

"We're joining ewes in October and weaning in July, so it's only a short period to get them back to joining weight," Mr Hall said.

"ASBVs are a great tool and do assist with the breeding program, but the best performing ewes are the ones which maintain body weight, continually get in lamb and rear all lambs scanned."

While it will help in performance recording of the stud sheep, the auto-drafter will also be handy in the commercial production.

"We'll be able to identify through our recording system, as to whether or not the sires we are buying are in fact producing the type of first-cross ewe lamb we want to produce," he said.

"This includes watching growth rates from weaning to sale."

Rams are annually sourced from the Inverbrackie stud at Finnis on the Fleurieu Peninsula, which is renowned for performance recording.

His goal is to make the most of the land available, and the only way to do this is by intensifying the program, as the high land price in his area limits expansion opportunities.

"This investment into the program, to identify the best and poor performers and select on that, will have a great impact on the production of the flock and it's a great return on investment - getting more lambs on the ground, that are growing faster, while increasing wool cut and culling the ewes that aren't in lamb," he said.

"If we have animals that are turned off quicker, we have the ability to either increase our breeding stock, or allow for adjustment in a drier finish to the season."

"Being one of three brothers, I don't want to be spinning the wheels, not knowing where it's going to go when farming is my life and I've made the investments in my stock and infrastructure," Mr Hall said.

SHEEP producers and woolgrowers in SA who are looking to increase on-farm productivity can access funding through the state's Red Meat and Wool Growth Program.

The $7.5-million program, funded by the state government, aims to support producers in lifting profitability, as well as encouraging the adoption of livestock technology through rebates.

The agtech adoption rebate for livestock producers provides a rebate of up to $10,000 (excluding GST) to assist them in adopting technology on their farm enterprises. To be eligible for the rebate, producers need to have participated in a livestock enterprise planning session, leading to the development of a farm agtech adoption plan.

Only the costs associated with implementing technologies that have been identified as high priority actions in the adoption plan will be eligible for funding.

At the moment all livestock enterprise planning sessions are fully subscribed, but rebate applications are still open for participants until March 31, 2022.