The Classings Classic ram sale went from strength to strength on Monday at the Murray Bridge Racecourse. A SOLE entry from the Mernowie stud at Marrabel topped the 20th annual Classings Classic sale at the new Murray Bridge Racecourse on Monday.

The April 2020-drop ram, weighing 120 kilograms, was among a handful of Mernowie rams Classings Classic sale host Bill Walker saw at the SA Stud Merino Expo in Burra and encouraged the Rowett family to enter into the Classings Classic line-up after a five-year absence.

It was decision that paid off, as the lot 96 ram, by Mernowie 101054, finished the sale strongly with the $20,000 top price knocked down to last year's top price ram sellers Gunallo stud, Pinnaroo, who won the bidding war against the Ridgway stud, Lameroo.

Gunallo stud principal Brad Schroeder said they had used Mernowie genetics in the past, but it was the first time they had seen this particular ram, which had a "great depth of body, very square, with a lot of potential".

"It had really good ASBVs and positive fat and eye muscle, double poll - all the things we are looking for - and stood well on the day," he said.

"It will go into our AI program, as well as naturally mating, and start a line with it."

Mernowie stud principal Ian Rowett said the ram was a "fine example of where the industry was heading".

"That was the motivation to bring it here - a decision that was vindicated by the good money it received," he said.

"It's a very well balanced ram, with beautiful long-stapled, bold crimping, white wool, and its structure was outstanding."

The Rowetts also had a display at the sale, in preparation for their ram sale on September 17. 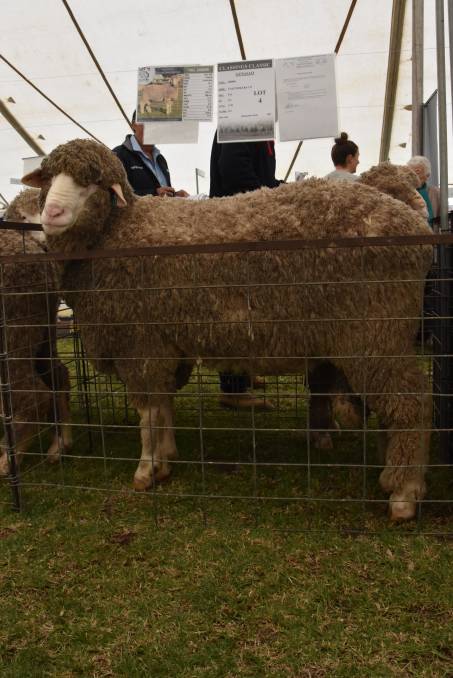 Gunallo's lot 4, which made the sale's second-highest price of $19,000, sold to the Glenville stud from Cowell.

The Schroeder family, Gunallo, had a good day out themselves, with their lot 4 making the sale's second-highest price of $19,000, sold to the Glenville stud from Cowell.

Glenville stud principal Daryl Smith said they had never bought from Gunallo before, but were drawn to the 136kg ram's "big, square frame, with good nourishment, and bright pearly white wool".

It was very safe structurally, with free growing wool - not a lot wrong with it. - BRAD SCHROEDER

Gunallo's Brad Schroeder agreed it was a "very good ram" and was very happy with the sale result.

"It was very safe structurally, with free growing wool - not a lot wrong with it," he said.

"We plan to use it in our flock as well, after collecting semen from him already, so we're excited to see what it does for us and Glenville." The sale's third-highest price of $17,000 went to long-time vendors Leahcim, Snowtown, who offered only two rams in the sale, with the other making $6500 to Gunallo.

The top ram sold to the Superior Wool Syndicate, which had also bought a Sohnic ram on display outside the sale tent for $30,000 earlier in the day.

"It was also -1.1 for breech wrinkle, so it had unmulesed, high value wool, plus high carcase traits and in the top 10pc for worm reduction," he said.

"We don't shed or feed any animals, so it's very much the genetics that make our sales and performances going forward, and that ram had the kind of figures the industry is looking for."

Nearly 100 buyers were registered for the sale, while 22 bidders were active on AuctionsPlus from across SA, WA, Vic and NSW, with 19 rams sold online.

Their top ram at lot 38 had a "back end like Beyonce", according to Nutrien stud stock auctioneer Gordon Wood, and was bought by Challara Poll Merino stud, WA, with Ridgway Advance retaining 50pc semen rights.

A trip across from Vic was made worthwhile for Willera, Serpentine, whose two rams averaged $11,500.

The new vendor was among five Vic studs (also including Wallaloo Park, Forest Springs, Sohnic and Hynam Poll) that made the trip from interstate, along with two from WA (Challara and Westwood).

We are very proud of what every stud has achieved this year at often-record on-property sales and extending into Classic '21. - BILL WALKER

The sale, hosted by Bill and Rose Walker, was conducted by Nutrien and Elders, with Elders stud stock's Tony Wetherall sharing the auctioneer duties with Mr Wood.

Mr Walker said the Classic had many highs and lows, but the increase in average (up $454 on 2020) set a fantastic new benchmark for the sale.

"There were a few spots that were surprising, but overall we are very proud of what every stud has achieved this year at often-record on-property sales and extending into Classic '21 with great result," he said.

"Thank you to the Vic and WA studs for making the effort under trying conditions and Glendon Hancock for piecing it all together from Vic."

Mr Walker said this year's sale had the most ASBV listings in its history, "showing an increased focus on meatier backends and sensible figures for Yfat and YEMD".

"We also had a great average again, considering the realistic top end prices achieved," he said.

Mr Wood said the sale was "solid" from start to finish

"What we had here were really modern, industry-relevant rams, with solid ASBV data behind them," he said.

"It was good to see so much interest from across Australia, including online, which in this COVID climate is good to see they are confident in either past performance or what they are able to see online.

"There was also both strong stud interest and from commercial buyers, validating the industry relevance of the sale."