MILLBRAE Poll Merino stud sold an extra 15 rams at its annual on-property sale on Friday, while still managing to lift its average and top price. 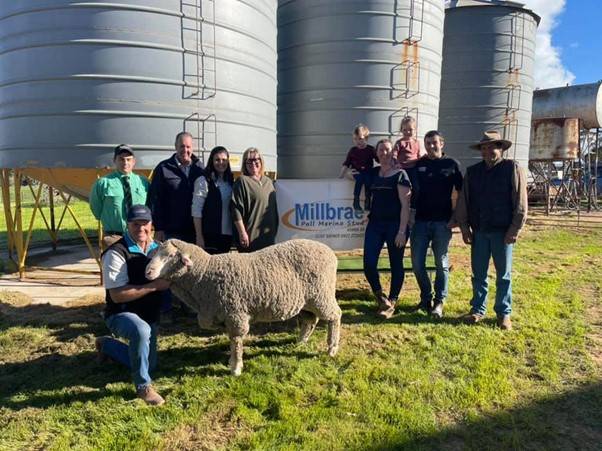 MILLBRAE Poll Merino stud sold an extra 15 rams at its annual on-property sale this year, while still managing to lift its average and top price.

The Rayner family, Kimba, hosted their eighth sale on Friday, selling 52 of 60 rams for an average of $1384.

This was an increase of more than $240 on last year's average, when 37 rams were sold.

The $6000 top price was also significantly up on last year's highest bid of $2100, and was a record sale price for the stud.

It was paid for lot 1, a ram weighing 129 kilograms with a greasy fleece weight of 7.96kg, bought by Lake Hamilton Station, Sheringa.

It was growing a fleece measuring 20.9 micron, with a 3.1 standard deviation, 14.9 coefficient of variation and 99.3 per cent comfort factor, and had an eye muscle depth of 44.4 millimetres with 6.1mm fat.

Stud principal Clint Rayner said the top lot was by a ram bought from Minta stud in 2016 for $16,000, and was a grandson of Collinsville Emperor 399.

"It was a very correct ram, with a straight top line and correct in the feet, a meaty, deep-barrelled animal with good wool figures," Mr Rayner said.

The sale lots were March-shorn with an average fleece measuring 20.3M and GFW of 5.84kg.

Nutrien Kimba conducted the sale, and auctioneer Phil Arcus said repeat buyers came from Nundroo to Port Kenny to Wangary, and from Sherlock to Broken Hill.

"The spread of repeat buyers shows the versatility and adaptability of the Millbrae sheep," Mr Arcus said.

"Millbrae is all about profit and their aim to target white, well-nourished wool on a meaty, deep-barrelled animal, giving a dual-purpose sheep, is reflective of their offering. Going from offering 40 to 60 rams this year, Millbrae is definitely a Poll Merino stud to watch."