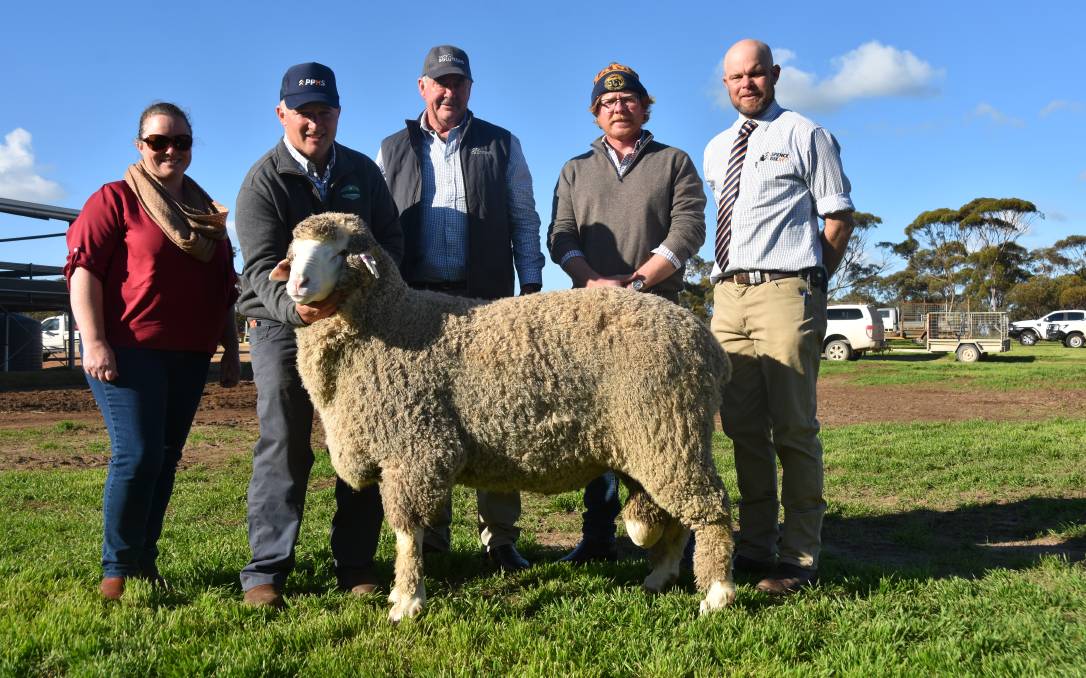 Last year, Peter and Marianne Wallis posted an exceptional $2960 average at their Pinnaroo property but this year they smashed it by more than $600.

Four rams made $10,000 or more- three of these heading to studs- but it was the consistent, high order bidding from both new and repeat commercial clients that made it a sale to remember.

Even in the final stages of the auction, big framed, carcase sheep with great wool quality were making $2000-$2600.

An embryo transfer bred son of GP382 stole the show much earlier at lot 10, selling to Will Lynch, Boorana stud, Woorndoo, Vic, for $25,000.

"We have used GP382 a couple of times in AI programs but it is always good to have a son of his on the ground doing the job," Mr Lynch said.

The sale topper, GP108, had tremendous presence and was the heaviest in the catalogue at 133.5 kilograms with an eye muscle depth of 42mm and 8.5mm fat depth.

The 21.6 micron ram also had impressive wool tests with a standard deviation of 3.1, coefficient of variation of 14.5 and comfort factor of 99.6 per cent.

Mr Lynch said they were achieving outstanding results with Glenlea Park bloodlines which had gave him the confidence to bid up.

Warren and Erikah Beattie, Mallee Hill, Ceduna, led the SA stud buying charge venturing to Glenlea Park for the first time after being impressed by the AuctionsPlus videos of the stud's Adelaide sale team.

They are confident their 19.0M pick will take their stud to "the next level" with the ram's dam also breeding a ram which Glenlea Park sold for $46,000 at the 2020 Adelaide Merino ram sale.

"Despite his plain skin he has very productive, awesome white crimpy wool, his growth rate is outstanding and his bone and constition was terrific," he said.

We never could have foreseen this. - Peter Wallis, Glenlea Park stud principal

Like many sales this season AuctionsPlus was a major player securing 10 lots from 79 bids.

Mr Wallis said it was an "unbelievable" result.

"I never thought we would ever get close to last year's sale average but I am happy to be proven wrong," he said.

Mr Wallis said he was confident in the quality of the catalogue but said there were some concerns leading into the sale with several Vic clients refused permits to enter SA, and the very dry season all threatening to dampen the sale.

"The seasonal conditions in the Mallee and Riverland have been very difficult until very recently and we knew a number of our bigger clients had been forced to reduce their stock numbers so we knew some of our volume clients would be significantly down on their purchases," he said.

"We knew this would impact on the sale but we didn't know how much, we never could have foreseen this."

Spence Dix & Co auctioneer Luke Schreiber said it was the strongest sale he had ever been a part of.

"There are plenty of repeat buyers, guys with pure Glenlea Park blood that are getting the results with the progeny and keep coming back."

Mr Schreiber was hugely impressed by the depth of quality and dual purpose attributes.

"His (Peter's) wools were spot on, they were white, they were well-crimped, they were solid right through the sale and the bodies... well the figures speak for themselves and they are so square," he said.