It is the second time the NSW stud had taken the top honour. 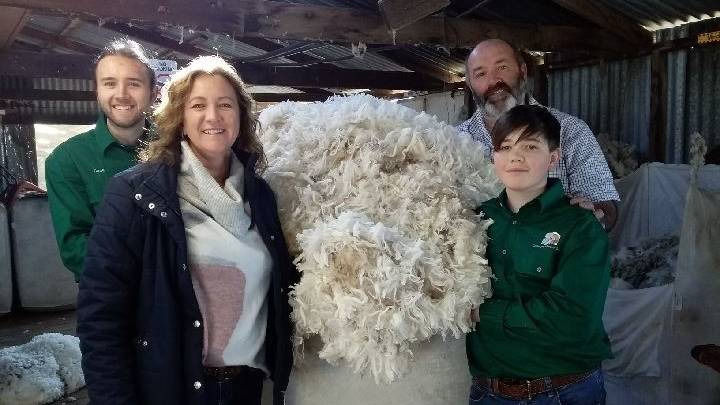 Stud principals Peter and Jayne Lette previously won the title in 2010 and this year were also recognised with the reserve champion award.

The grand champion 17.8 micron fleece was in the superfine Merino stud ram class and scored 94.52 out of a possible 100 points.

Ms Lette said she was thrilled to receive the award.

"Peter and I couldn't believe it when we were told that we had won, and to receive the reserve champion award as well was a great surprise," she said.

Mr Shawcross praised the standard of entries this year, with the winning fleece in a number of classes prevailing by only a fraction of a point.

"Any one of four or five entries could have easily won each section, as well as the grand champion," he said.

Exporter judge Mr Lamb highlighted the differences from when he judged the competition in 2019.

"The previous competition certainly reflected the conditions at the time, with a large number of commercial entries impacted by lower yields and lower tensile strength," he said.

"This year we could see a major turnaround, again reflecting the better conditions in most areas.

"Processing requirements and purchase price are dictated by a number of factors, but strength and yield are key indicators."

The Australian Fleece Competition is the largest fully measured fleece competition in the world, attracting more than 400 entries from 145 exhibiters.

Competition convener Candice Cordy, Nutrien Wool, said she was proud to reach a great milestone this year, celebrating 20 years of the competition.

"After the disappointment of cancelling the competition in 2020 due to Covid restrictions, it is wonderful to see the support from sponsors and exhibitors hasn't waned, if anything we have seen the competition expand in it's 20th year," she said.

Ms Cordy also pointed out the commercial value component of the competition, giving woolgrowers a snapshot of current trends, and offering a valuable tool to assist in decision making regarding flock management and direction.

The competition is supported by 26 sponsors and offers $17,000 in prizes, with the grand champion fleece exhibitor collecting a $2000 travel voucher sponsored by Nutrien Wool and Gallagher.

JD & RE Humbert, Kedleston Park, were this year's winners of the Performance Class, which caters for exhibitors shearing in six to eight-month cycles commercially.

The Performance Class was extremely well supported, with growers keenly monitoring the outcome.

Almost two thirds of the fleeces on show were donated by exhibitors to be auctioned at the completion of the competition, with all proceeds donated to a different nominated charity each year.

More than $178,000 has been raised since the competition began.

"MND Victoria have been closely involved in this year's competition, and part of their mission is to provide the best possible care & support for people living with MND," Ms Cordy said.

"Hopefully this a little closer due the generous support of the woolgrowers involved in the fleece competition."

All competition fleeces were weighed and sampled for objective measurement (including length and strength), under standard procedures of the Australian Wool Testing Authority.