ENTRIES into the SA Junior Heifer Expo have already filled as organisers prepare for the event's resumption in 2021, following the 2020 cancellation. 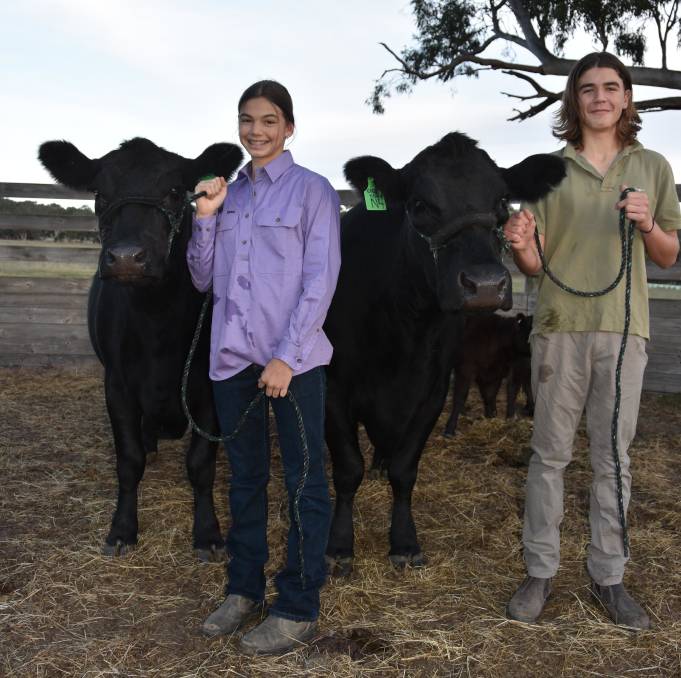 GETTING READY: Emily and Tomas Bond with former Heifer Expo exhibits, which have since calved down in their stud Double 07 at Meadows.

ENTRIES into the SA Junior Heifer Expo have already filled as organisers prepare for the event's resumption in 2021, following the 2020 cancellation.

The age limit has also been lifted to 24 for 2021 only, allowing those previous senior entrants who missed out last year to compete for the final time this year.

The major annual award at the Expo is a $6500 beef industry scholarship, which is awarded to the Senior Champion Herdsperson.

The scholarship can be used for a study tour, work placement or study.

The expo's re-introduction has been well received, with coordinator Justine Fogden saying the 150 entries were filled within two weeks of opening.

While the program for the four-day expo has not been finalised, Mrs Fogden said as well as the customary handling and herdsperson competitions, there will be a full day of industry lectures covering topics such as selling livestock online, emerging technologies and other topics relating to industry best practice.

"We'll have a range of topics to increase participants knowledge of the beef industry," she said.

"The expo is designed to educate youth about all things beef cattle, but it's also a valuable event for skill and relationship-building, practicing public speaking and investigating career paths and job opportunities.

"There are also lifelong friendships made because we have entrants from all over Australia. It helps create a good network for the beef industry across Australia."

FINAL FORAY: The 2021 SA Junior Heifer Expo will be the last for long-time coordinator and committee member Justine Fogden, as she steps back from the role.

The 2021 expo will be the last for Mrs Fogden, who has been recognised as an enormous contributor to its success.

An agriculture teacher at Loxton High School and operator of Nangaringa Santa Gertrudis and Boulview Charolais studs at Nangari with husband Peter and children Alizah, Thomas and Eleni, Mrs Fogden said her final event on the committee would be an emotional one.

"The number of past expo entrants who are doing major things in the beef industry is one of the most pleasing aspects for me," she said.

"Seeing kids go on with their careers and becoming really successful in many different sectors of the agriculture industry - not just the beef industry - is fantastic."

Mrs Fogden said the relationships she'd built through being involved in the expo were what she cherished most.

"Those kids who I was a group leader for when I first started now nearly have kids old enough to compete and I'm still friends with them, many have come onto the committee with me and I've seen hundreds of kids grow and become adults involved in the beef industry," she said.

"I love seeing kids, who are brought along by a friend or are involved with the led steer program at school, come to the expo and the industry becomes their passion and their career." Two entrants excitedly getting their Double 07 stud Angus heifers prepped for the expo are Tomas, 15, and Emily 13, Bond, Meadows, who have participated in the event the past five years.

Tomas said he enjoyed the heifer judging section of the expo, which was good practice in the lead-up to the Royal Adelaide Show, while Emily enjoys the handler class and catching up with friends

The teenagers got involved through their mother Simone Bond - a past expo competitor.

"We had some friendly dairy-cross commercials that the kids were able to practice on, so they entered when Emily was eight and Tomas was 10 and have been attending ever since," she said.

"We formed our Blackstone stud in 2016, which the children then borrowed heifers for the expo."

Mrs Bond said the showing experience inspired the kids to establish their own Double 07 stud, from expo heifers and cattle bought at the 007 stud dispersal in Vic, where they also bought the brand and naming rights.

RELATED:Check out all the action from the 2021 SA Sheep Expo

They now have 12 breeders, with calves at-foot.

Tomas and Emily would normally participate in nine different agricultural shows throughout the year, but COVID-19 cut that back to just one last year (Mannum Show).

"We would normally participate at the Mount Pleasant and Mount Barker shows, but we didn't get there this year, so the heifer show will be our first show back," said Emily, who was the reserve junior champion handler two years ago.

It is also the first year they will be exhibiting their own progeny.

"Preparations have started, a lot of washing and brushing, but we still have a fair bit to do in building up that trust," Tomas said.

Sponsored by
A MoU has been signed to explore the development of a Green Ammonia and Green Hydrogen industry on the EP.
Test
THE relationship between the South Australian and Uruguayan wool industry is set to be strengthened by a new business venture being established by a familiar face in the Mid North.
Test
SA graingrowers can pursue new market opportunities with greater confidence thanks to a new industry-led initiative.
Test
Proposed changes to South Australia's corruption watchdog would dismantle the office and rob the public of an efficient integrity agency, a state parliamentary committee has been told.
Test
The concept of registering Farm Firefighting Units has caused controversy among regional communities after the Country Fire Service last week announced a new program being trialled where registered operators would have better access to safety and insurance arrangements.
Test
A 346-hectare (855-acre) property located on the Northern Yorke Peninsula is well suited to mixed farming and has hit the market and is being offered as a whole or in two contingent lots.
Test
Seven state and territory emerging beef leaders set to take careers to next level
Test
A global shortage and drought in key production areas are helping keep lentil prices high.
Test