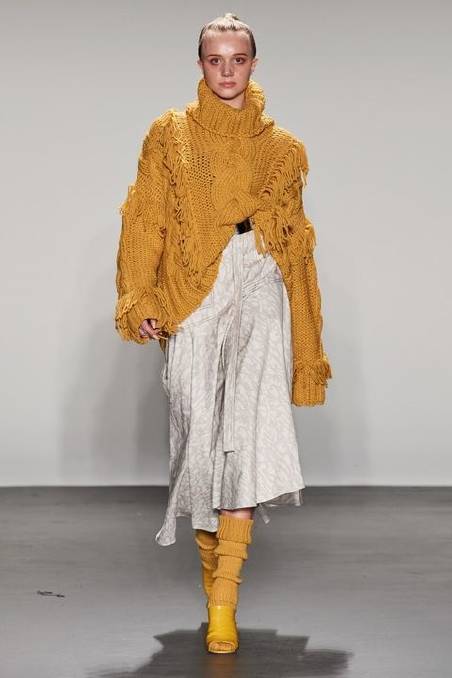 Eco credentials are being increasingly encouraged for the fashion industry.

Soon there will be extra information on your clothes labels.

Not just the size of the garment and how best to care for it, but also whether what you are wearing is good for the planet.

Customers are driving a generational change in the fashion world.

They still want clothes to be attractive, comfortable and affordable.

But they also want them to be eco-friendly.

This new environmental stewardship is a global movement which impacts not only on clothes, but on food, cars and even the power in our homes.

It is no longer enough to know your washing machine is five-star-rated, but also that the garments inside it will have an eco-rating.

If you think this is "green thinking" gone mad, the European Union (EU) is now formulating policy to have environmental labeling on all consumer products by next year.

The rest of the world is expected follow suit in coming years.

The EU says it wants to "guide consumers towards choosing the most sustainable products".

You might think this is good news for Australian farmers, who have long prospered on world markets with their "clean and green" image.

Most of their produce comes from grass, and what could be more natural than that?

But, puzzlingly, this is not so.

For instance, the EU has already outlined its proposed strategy for clothing.

Its rating rules to be applied to textiles result in all-natural fibres being rated as less sustainable than synthetic fibres.

Synthetic fibres, we remind the reader, are a by-product of crude oil production.

How can this be?

Isn't our over-use of fossil fuels what got us into this climate change mess in the first place?

Under the EU proposals:

Natural fibres are to be fully costed based on the environmental impacts of growing the plants that lead to fibre formation. This includes use of land, water and energy and greenhouse gas emissions.

Under this rating system, the environmental impacts of growing the plants that ultimately form crude oil used to make synthetic fibres are not accounted for.

This is why something is happening that most of us never thought we would ever see - an alliance between cotton and wool.

For generations, these two fibre giants have slugged it out across the world - competing for the hearts, minds and shopping dollar of consumers - and with each slagging-off at the other.

The wool sector has argued that cotton production uses too much water, changes the landscape and its material stains easily.

The cotton sector has argued that wool products shrink, are heavy and hard to wash - and that there are animal welfare issues with sheep.

For the first time, the wool and cotton industries are now looking to bury the hatchet and join forces globally to take on synthetic fibres.

This is only because of the EU proposals, we hasten to add.

Wool and cotton sectors both believe they have the same eco-friendly credentials to challenge for better environmental ratings.

They want to champion the benefits of natural fibres being able to offer many solutions to the world's current environmental challenges.

A wool industry leader recently entered uncharted waters when invited to speak to an international cotton conference in Germany.

Ms White said, under current ratings systems, products made from wool and cotton are at risk of being rated poorly compared to synthetics.

This natural fibre alliance may go further than cotton and wool to take in other natural fibres as well - including silk, mohair and even plant fibres.

Australian woolgrowers are trying to get on the front foot.

Industry bodies such as WoolProducers Australia have just released a Trust in Wool campaign to outline the facts.

The head of that program, Angus Ireland, said the plan was for a "much broader collaboration" than just the wool and cotton industries.

He said all natural fibre industries, including plant and animal fibres, are at risk of being harmed if the EU's PEF labling scheme proceeds without improvement.

AWI's intention is to form a natural fibre coalition, and it has already started discussions with the international bodies representing these other fibre types.

Mr Ireland said the EU was in its consultative stage on textiles, so AWI would be taking every opportunity to join in during 2021 - including providing feedback about the Sustainable Products Initiative.

He said AWI wanted the EU to set out a level playing field for all fibres.

Chiefly, this would be based on an understanding that natural fibres are renewable and biodegrade.

The Sustainable Products initiative, which will propose legislation aimed at making products sold in the EU more sustainable, is open for public consultation until June 9. A questionnaire can be foiund at ec.europa.eu.

The story Hanging on by a thread as fibre giants fight for eco-rights first appeared on Stock & Land.