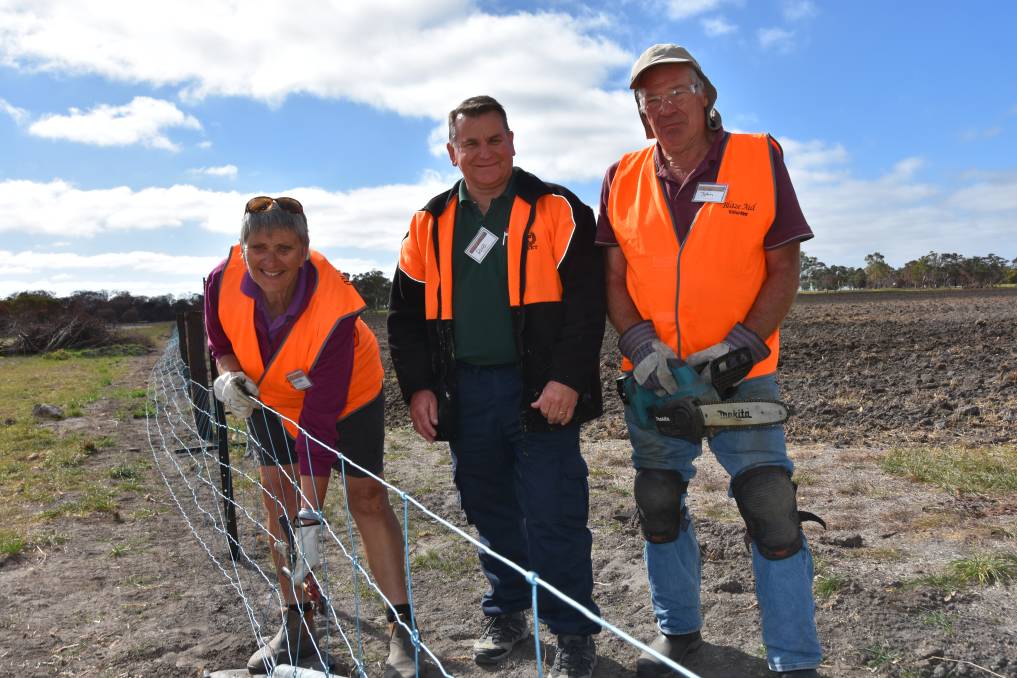 BlazeAid volunteers are making big inroads in helping bushfire-hit farmers at Lucindale and Avenue Range get back on their feet with their contribution already worth an estimated $152,000.

BlazeAid volunteers are making big inroads restoring fences and helping bushfire-hit farmers at Lucindale and Avenue Range get back on their feet, with their contribution already worth an estimated $152,000.

As of Monday, 113 volunteers have put in 846 days within the 14,000 hectare fire ground rolling up nearly 60 kilometres of burnt wire and rebuilding nearly 120kms of fencing.

Since the camp opened in late January they have completed work on seven properties and are progressing with work on another 20 farms.

Lucindale trainee camp coordinator Rob Edwards say they have worked closely with the fencing contractors in the area often tying on droppers after the posts have been rammed into the ground, but they have also entirely put up a few fences.

He says the hard work is all worth it for the volunteers when they see how grateful the farmers are.

"It is a satisfying job, at the end of the day you can look back down the fence and see what you have done," he said.

"The farmers are quite surprised how much we can get done in a day and how quickly we finish what might take them weeks.

"There have been people come from all over the place, from NT, WA and quite a few from Vic."

Mr Edwards and his wife Broni - who call Virginia in Adelaide's northern suburbs home - first volunteered for BlazeAid early last year after the Cudlee Creek fires with plans to then head in their new caravan to help at Keilira and other BlazeAid camps in the eastern states.

But just three weeks after setting up at the Lobethal camp, COVID restrictions hit and the camp was closed and they had to head home.

The career experience of BlazeAid volunteers is highly diverse from health to teaching to transport and also includes a few ex-farmers such as John Savage, Koroit, Vic.

He and his wife Lynette first volunteered for BlazeAid in the aftermath of the Cobden, Vic, bushfires in 2018 and stayed for the whole 10 months the camp was open. They have also been to Bunyip in Vic's Gippsland helping out.

"You meet a lot of fabulous people and we had never been to this area so it is something new for us."

Working alongside Mr Savage is Lyndal and her husband Andrew who have been been to seven BlazeAid camps and were previously sheep and grain farmers from Edenhope, Vic.

"Yes we work hard but we have a lot of laughs here too and we get to meet a lot of other farmers and see how other people do it in other areas," she said.

While Stock Journal was interviewing the team working on two kilometres of fencing the property owner Ashley Reynolds turned up with a couple of bundles of droppers.

He says after the harrowing experience of coming close to losing his house it "makes him smile" to see a new fence up, especially as he is still working through the insurance claim. BlazeAid volunteer and former local Maggie Paltridge, who is now based in Perth, attaches droppers to a fence at Avenue Range.

On a nearby property another team led by WA resident Maggie Paltridge is busy attaching droppers.

Ms Paltridge, who grew up on a property at Avenue Range right in the fire's path, says she was visiting her mother at Gawler and decided to head down to lend a hand.

"I had heard people ring up Macca (Australian All Over radio program) and say what a wonderful experience BlazeAid was. It is a satisfying job knowing you are helping people," she said.

"The farmers are always so thankful and appreciate what we do, whereas I work in IT so no-one ever says thank you at the end of the day."

The Lucindale camp at Yakka Park is expected to remain open for another four or five weeks and Mr Edwards says they would welcome those who want to roll up their sleeves, or even assist with the catering.