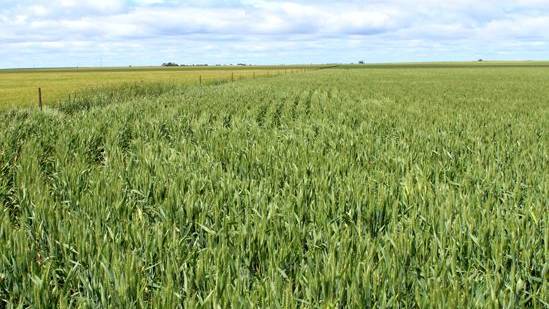 A prized 129 hectare block in the heart of the Kalkee Plains has sold in line with expectations, at a hefty $5450/ac.

A SMALL parcel of farming land located in the centre of the rich Kalkee Plains north of Horsham in the Wimmera sold for $5450 an acre at auction last Friday.

"It is primarily black Wimmera clay, capable of growing really good crops, apart from a small 8 acre (3.2ha) that has light timber across it," Mr Ower said.

The block is fenced into three main paddocks, plus a holding paddock with a shed and shed trees, comprising the timber component.

It is also on the Wimmera-Mallee pipeline, meaning it can be used for livestock as well as cropping.

The block, sold by Barbara Keech of Horsham, was bought by Kardella Plains, run by local farmers Graham and Susie Hedt.

It was sown to wheat and barley last year after a legume hay phase in 2019.

He said the price was in line with other land sales over the traditional late summer selling period.