Job vacancies have continued to rise, as employees search for staff at levels 40pc above the previous year. 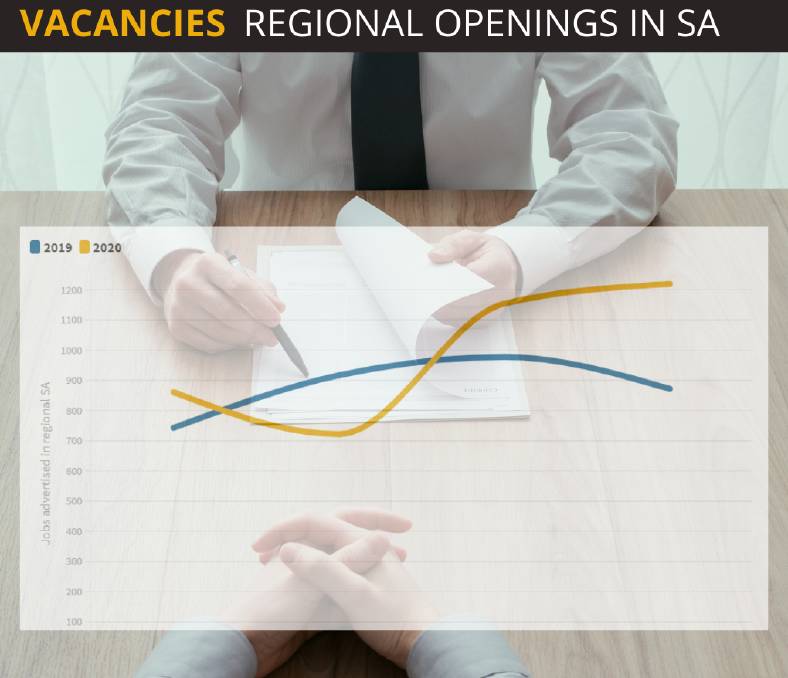 WORKERS WANTED: The trend of job advertisements in 2019 (blue) and 2020 (yellow) for regional SA, with demand on the rise. Image: SHUTTERSTOCK

DEMAND for workers continues to rise in regional SA, with the final quarter of 2020 experiencing a nearly 40 per cent jump on the 2019 figures for jobs advertised, as well as a 5pc lift on the previous quarter.

According to the Regional Australia Institute, more than 54,000 jobs have been advertised online for regional areas nationally, which is up 30pc on the same time the previous year, as part of a steady rise since April, indicating country areas have been recovering since the COVID-19 lockdown.

At the same period, all mainland capital cities are still 3.5pc down on 2019.

While the data shows the most in-demand jobs are well-paid mid to high skilled professional and trade jobs - making up more than 50pc of all advertised vacancies - there is a fast-growing need for lower-skilled work, such as labourers and sales workers.

The job vacancy map for December shows, of the 400 jobs advertised in the West Coast, Eyre Peninsula and Far North, the highest demand was for professionals, such as legal, social and welfare worker or engineers, followed by technicians, including automotive trades, then labourers.

In the Yorke Peninsula, Mid North and Riverland, professionals were also in highest demand, particularly medical practitioners, followed by labourers.

It was only in the Fleurieu Peninsula, Murray Mallee and South East, with 628 vacancies, that labourers were most in need, particularly those for "farm, forestry and garden work", followed by professionals.

The state government is still working to attract workers to fill some of the critical seasonal roles in the regions, including hospitality, retail and agriculture, with Primary Industries and Regional Development Minister David Basham saying this is part of its focus to rebuild the economy.

Advertising as part of the $4.45-million Seasonal Worker Program has begun, targeting key groups, such as students and older workers with the flexibility to do short-term work, he said.

As part of the program, the government also offered incentives to people willing to move to regional areas for seasonal jobs of up to $2000, alongside the federal government's $6000 relocation grants for those working in agriculture.

Mr Basham said there had been huge interest in the campaign, with more than 110,000 visitors to the regional work website, as well as 15 applications for the federal program in SA and eight people seeking funds through the state program.

Another facet of the campaign has been support to bring in workers from the Pacific Islands, with the first group of 100 already arrived, finished quarantine and working.

Mr Basham said the first cohort was employed in the meat industry and in glasshouse horticulture.

"There is strong interest from other employers, particularly for the upcoming citrus harvest, and we are working on how to manage quarantine arrangements for these workers," he said.

Ausveg SA chief executive officer Jordan Brooke-Barnett said he knew of other employees considering the scheme ahead of another busy period in March.

He said it was important fruit and vegetables were able to be harvested on time, to ensure prices did not rise for consumers, with many still living on reduced budgets.

He said the award wages for work were generally about $25 an hour, with the biggest issue having people in the locations were work was available.