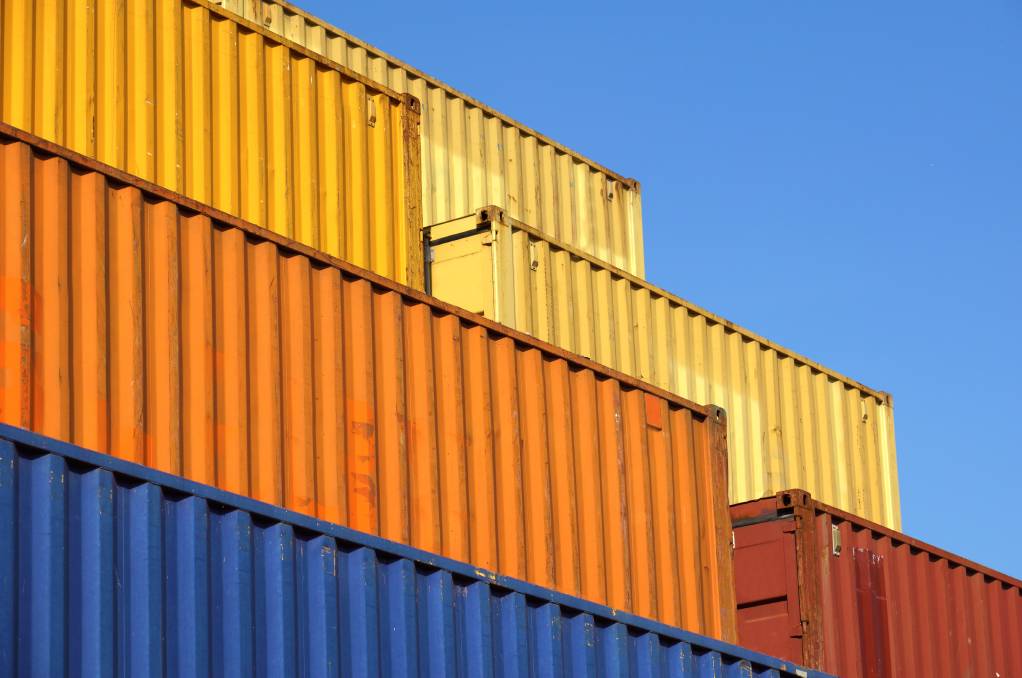 Trade shifts caused by COVID-19 mean many sea containers are being shipped off to one port and then getting stranded due to less volume of return trade.

Container issues mean grains, oilseeds and other farm produce are piling-up at ports.

Rapid recovery of the Chinese economy, relative to the rest of the world, following the coronavirus pandemic has led to a surge in export volumes and a global container market crisis.

China's containerised exports are far higher than its imports - with three containers leaving China for every container arriving.

Consequently, empty containers are stranded in the west when they need to be in Asia.

Chinese demand for containers is so high that exporters are paying huge premiums for empty boxes.

These premiums have climbed to such a level that it is now more profitable for carriers to send the boxes back to China with no cargo, rather than waiting to have them refilled with goods destined for Asia.

It is not entirely unusual for containers to travel back to the load port empty after a voyage, especially if container imports greatly exceed exports at the destination.

But it is not typically a profitable exercise, and it is far more common for shipping lines to back-fill the boxes to boost round-trip earnings and maximise income.

The cost of sending full containers from China to the United States is currently about ten times higher than the reverse journey.

This provides the carriers with a big incentive to quickly reposition bare boxes back to China, rather than waiting for them to be filled with US exports.

It is estimated that 75 per cent of containers moving from the US to Asia at present are making the journey "un-stuffed".

This issue escalated late last year, just as US agricultural exports were entering their busiest period.

It is estimated that shipping lines rejected almost 178,000 twenty-foot equivalent units (TEU) of US agricultural produce, worth hundreds of millions of dollars, in October and November alone.

And this was from just the ports of Long Beach and Los Angeles in California, and the east coast ports of New York and New Jersey.

Port congestion at the US West Coast ports of Los Angeles and Long Beach is also unprecedented due to high inbound volumes and surging COVID-19 cases among dock workers.

This has forced shipping lines to cancel scheduled sailings, not for lack of demand ,but because of a lack of tonnage - as the huge container vessels are stuck at anchorage awaiting berths.

And when they do berth, the quickest turnaround option is to load-out empties.

In December 2020, the spot freight rate for the Asia to North Europe route was 264 per cent higher than in December 2019.

For the Asia to West Coast US route, the rate was up 145 per cent compared to a year ago.

Rates for the China to Europe and China to US routes have surged more than 300 per cent compared to the market low in March last year, with freight now costing about US$6000 per container.

There are about 180 million containers worldwide and, when COVID-19 hit in early 2020, the shipping lines cancelled orders for new boxes due to fears of a global recession.

The speed and magnitude of the Chinese recovery has caught the industry off-guard.

It meant that almost all of the carriers needed to add significant container capacity, by offering more services on the busy routes, to address the container shortage challenge.

The container freight issue has been exacerbated by the plunge in international air freight capacity.

The coronavirus pandemic, and subsequent global travel restrictions, have led to passenger services plummeting and this has added demand to the containerised sea freight market.

Another contributing factor is that containers generally move back and forth along the same shipping route.

The disruptions to international trade caused by COVID-19 now mean that many containers are shipped off to one port and then get stranded, as the volume of return trade has dropped.

That container may then be packed and loaded out to an exotic location to use the asset, making it even more difficult to return it to its regular path.

Food importers around the globe depend on a reliable and efficient worldwide container market.

Most market sectors have been affected to some degree, but the passage of agricultural commodities has suffered greatly.

Grains, oilseeds and other farm produce are piling-up at port facilities throughout the western world and across parts of Asia.

Pulses out of Canada, such as lentils and peas, have been stranded at port for weeks waiting for space on regular services to Asia.

India's sugar exports were only 70,000 tonnes in January, which was less than 20 per cent of shipments 12 months earlier.

Vietnam is battling to find container capacity for its regular coffee and rice exports to the US, and US soybean and cotton exports can't find export slots. The list goes on.

The situation is so dire that some importers are switching to buying in bulk, which is putting upward pressure on bulk freight rates.

Some buyers are cancelling contracts, as the counterparty has failed to meet terms. Others are deferring purchases to avoid delays and high freight costs.

Domestic traders and exporters in many jurisdictions are reluctant to offer, especially in the nearby market, due to the freight market chaos.

The global flow of refrigerated containers is also in turmoil.

China's rigorous customs clearance process is causing lengthy delays at ports and a backlog of imported containers waiting to be cleared.

Reportedly, there are so many refrigerated containers piled-up in the port of Dalian that it is running out of power plugs to keep them operating.

This has been one of the key reasons behind the recent spike in China's domestic pork prices.

Retail pork prices in the country have risen to the highest level since September last year, prompting Beijing to boost sales from state reserves ahead of the Chinese New Year holiday this month.

The story in Australia is no different.

Container parks are reportedly full of empties, yet these are not being released unless the intended cargo will reposition the boxes back to China.

When China imposed a timber ban last year, it was expected that this decision would free-up containers for other agricultural exports. That simply hasn't been the case.

Australian grain is currently extremely competitive into Asia - and beyond.

Exporters are seeing plenty of Asian demand for containerised farm produce, but exporters and packing facilities are struggling to get boxes.

Instead, export slots are being rolled by weeks - and even months in some cases - and some of the containers are being sent back to China empty, as the shipping lines are being paid handsomely to do so.

The story Farm produce is piling-up at ports across the western world and in Asia first appeared on The Land.