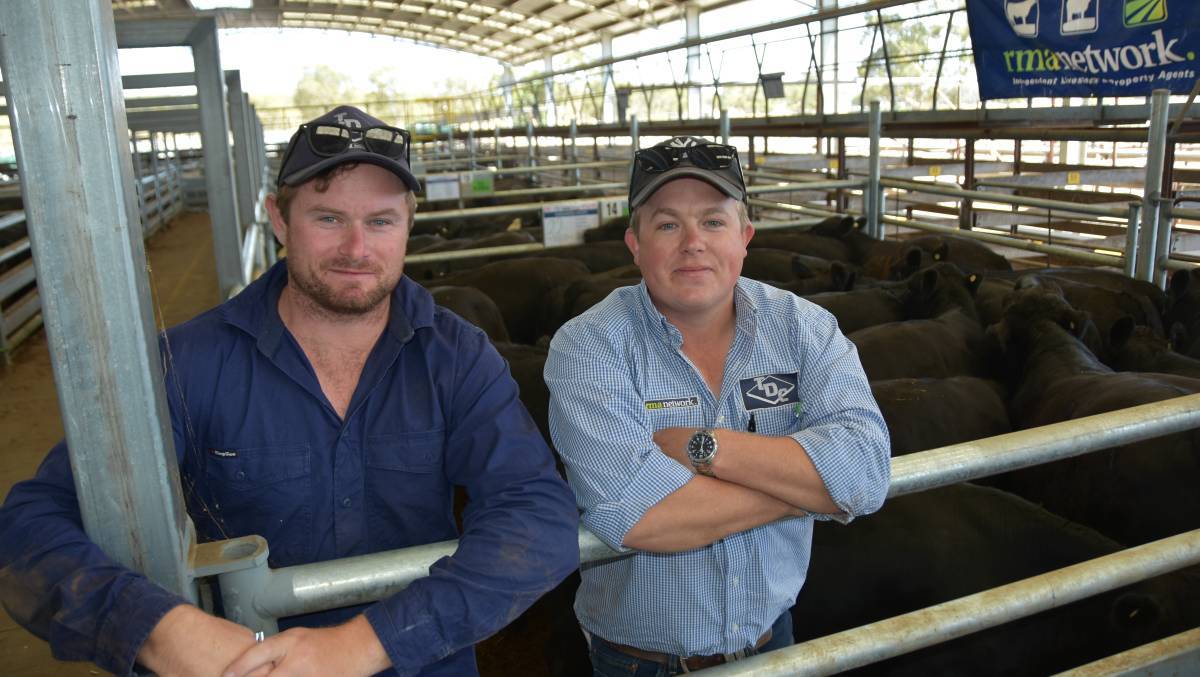 REWARDS: In an example of the success had by growers at this year's SA weaner sales, Jase Bateman, left, of Kanangra Props in Furner, and agent Sam Hill, of Thomas DeGaris & Clarkson in Penola, are pictured in Kanangra's top pen of Black Simmental-Angus weaners that made 472 cents a kilogram - or $2139 per head - at the Naracoorte.

Weaner sales across SA have been firing, setting a good pace for bull sales.

Sizzling weaner values this summer are a key indicator of the prosperity being experienced by many South Australian cattle producers going into 2021.

And those running popular and productive Angus and Angus-cross herds are riding the top of the wave.

In two short years, weaner prices have more than tripled from about $500-600 per head - when graziers were heavily destocking due to drought conditions in New South Wales, Queensland and parts of Victoria - to hit $1500-2000/head (or more) as the stock supply shortage now bites.

And lines of quality, well-bred Angus have been leading the charge.

This was at the on-farm Amherst Weaner Circuit sale, at Willalooka, for Black Simmental-Angus and Angus weaners.

Kicking-off at Naracoorte, the first sale saw $7.08 million worth of steers changing hands in 2.5 hours and the average price across the 4000-head offering was 488 cents per kilogram (liveweight), or $1743/head.

Most of the stock yarded weighed more than 350kg and attracted the interest of feedlotters and backgrounders, including those based in Victoria and NSW.

Topping the market to set a record price at this feature sale was Lachie and Peter Seears' Bonderoo Pastoral Company, clearing 20 Angus steers with Sheraco bloodlines and weighing 450.7kg for 475c/kg, or $2141/head.

Other Naracoorte sale one highlights included a line of Angus-cross steers from Kanangra Props in Furner, which made $2139/head; a pen of Angus steers from Clovelly Pastoral in Naracoorte that averaged $2040; and a line from LS Johnson and Sons' Granite Ridge and Boonaroo-blood Angus steers that sold for $2010.

At the Naracoorte heifer weaner sale, also held in early January, an Angus-Simmental line topped the yarding with 10-11-month-olds from Neil and Lisa Davis, of Bimbadeen Ag in Coonawarra. These fetched 484c/kg, or $1883/head.

Across the east coast, Elders business unit Thomas Elder Markets (TEM) reported that the January weaner sales had delivered average prices of 500-550c/kg, and some heifers had reached into the mid-600c/kg for lines of young, light females weighing under 280kg.

Weaner sales in Victoria were particularly strong, kicking-off with the Hamilton Western Districts Weaner Sale where agents penned 3464 weaner steers that averaged 494c/kg, or $1744 a head.

At Victoria's special Angus steer sale, held in Casterton in early January, prices got to $1100-$1300/head. 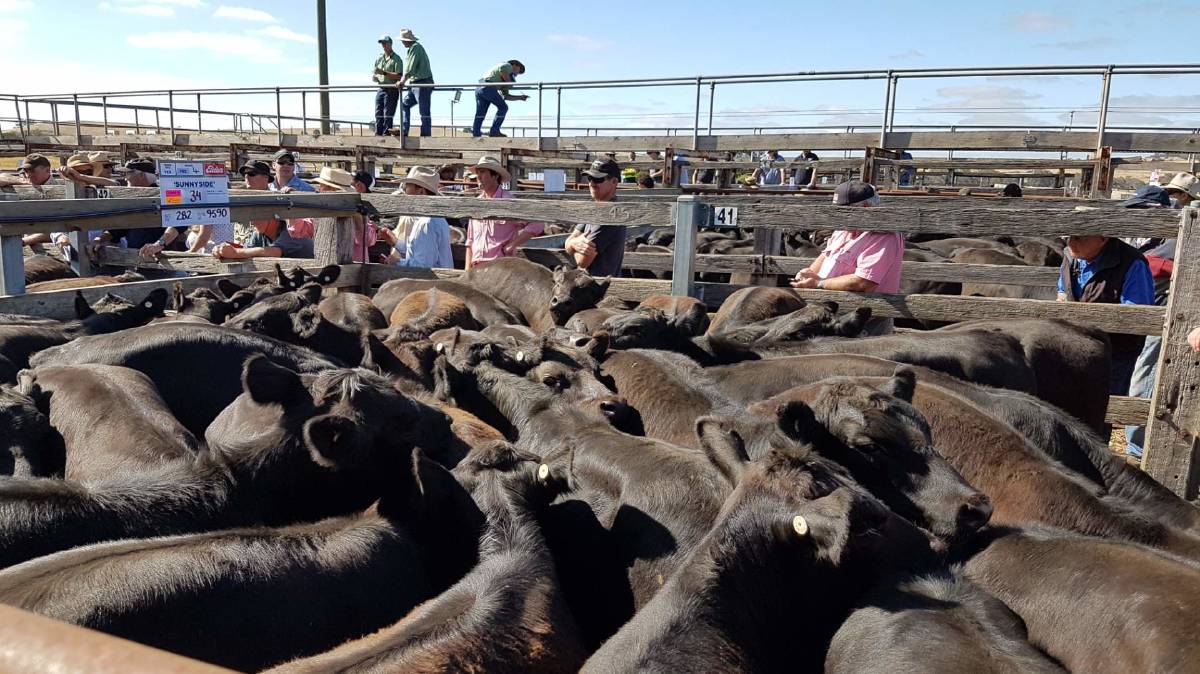 IN DEMAND: Competition between producer restockers, feedlotters, finishers and meat processors right across the nation is driving the current surge in values for young cattle.

Competition between producer restockers, feedlotters, finishers and meat processors right across the nation is driving the current surge in values for young cattle.

Those graziers who were able to retain their breeder numbers - and invested heavily in feeding them - are now reaping the rewards of the strong demand.

Unfortunately those forced to destock are now having to pay these unprecedented prices as they seek to rebuild their herds.

Demand from these restockers is expected to remain very high during 2021, as good seasonal conditions have provided abundant paddock feed that many are keen to use.

Processors are also having to meet the market to get enough supply to keep their domestic and export customers stocked with product.

In another indication of how market fundamentals have shifted in favour of the seller, the eastern young cattle indicator has surpassed 870c/kg, which is well above its March 2020 (then) record of 731c/kg achieved when the eastern states drought broke.

Heavy steers also started 2021 on a strong note at 374c/kg, after coming off strong highs experienced in November last year. This was up 95c/kg from the same time last year.

Prostock business manager Scott Endersby said cattle values had been extremely strong across the board in SA and the eastern states at the start of 2021, continuing a strengthening of the market witnessed late last year.

He said Angus heifers and steers had been selling particularly well - regularly fetching $1600-$2000/head through the Southern Livestock Exchange, which is managed by Prostock and transacts more than 60,000 head of cattle annually.

"Sales of Angus steers have been particularly hot, with some top lines selling for $3000-$5000/head or more," he said.

"We thought the market was fantastic at the end of 2020, but this year has seen prices switch up to a whole new level."

Mr Endersby said there was a fear that cattle numbers would not hold going into the traditional selling months of February and March, prompting many buyers to scramble for the supplies available during December and January.

"Graziers have been selling-off stock earlier to take advantage of the market conditions," he said.

"This really started back in late June 2020 and continued through to September, with farmers selling cattle at lighter weights of 250kg rather than holding them to their typical sale weights of about 350kg.

"They have been able to get similar prices without using the feed to add another 100kg.

"Some of our clients are about eight weeks ahead of where they would usually be on their selling schedule because prices have been so buoyant."

Mr Endersby said right throughout January, markets had been favourable for all types of stock - from weaners to bulls and cows.

"There has been no weakness in any sector, and we anticipate conditions will remain steady for some time to come," he said.

"Demand from buyers is huge across the board, as traditional high volume finishers, feedlotters and processors seek stock.

"Good spring and early summer rain across NSW, Queensland and Victoria has also spurred even more activity from restocker graziers."

Mr Endersby said cattle prices for the next three months were likely to remain in the sellers' favour, as demand continued to outstrip supply.

He expected the positive sentiment would spill-over to looming annual bull sales, especially for the Angus breed that had marketed itself very well and was now the most popular in many southern areas.

The severe drought destocking - and now the herd rebuild - has given breeders the opportunity to improve genetics.

And many in the industry expect some commercial breeders to make the switch to Angus as they rebuild.

"Maybe one dampening factor could be that herd breeder numbers have been reduced in some areas during the drought period, so there may be less females to mate and fewer bulls needed," Mr Endersby said.

When considering restocking in the current market, TEM analyst Matt Dagleish has investigated whether it can pay for producers to buy weaners at current price levels.

He looked at two weaner trades, based on average price and liveweight data from some October 2020 sales across Australia.

At that time, the eastern young cattle indicator was about 820c/kg carcass weight, or about 440c/kg liveweight.

Mr Dagleish found (using two grass-fed cattle trade matrices) that there was still money to be made if cattle could be turned-off at a price of 350c/kg liveweight - or higher - once more weight was put on.

His analysis showed buying lighter weaners that weighed less than 275kg could be profitable if they could be carried through to 550kg and sold for 325c/kg or more.

Buyers of heavier weaners - weighing more than 350kg - that cost 500c/kg would struggle to make a profit unless they could fetch 365c/kg or more, he said.

Mr Dagleish said modelling suggested national heavy steer prices would ease by about 20c/kg liveweight, or about 6 per cent, on average during the 2021 season.