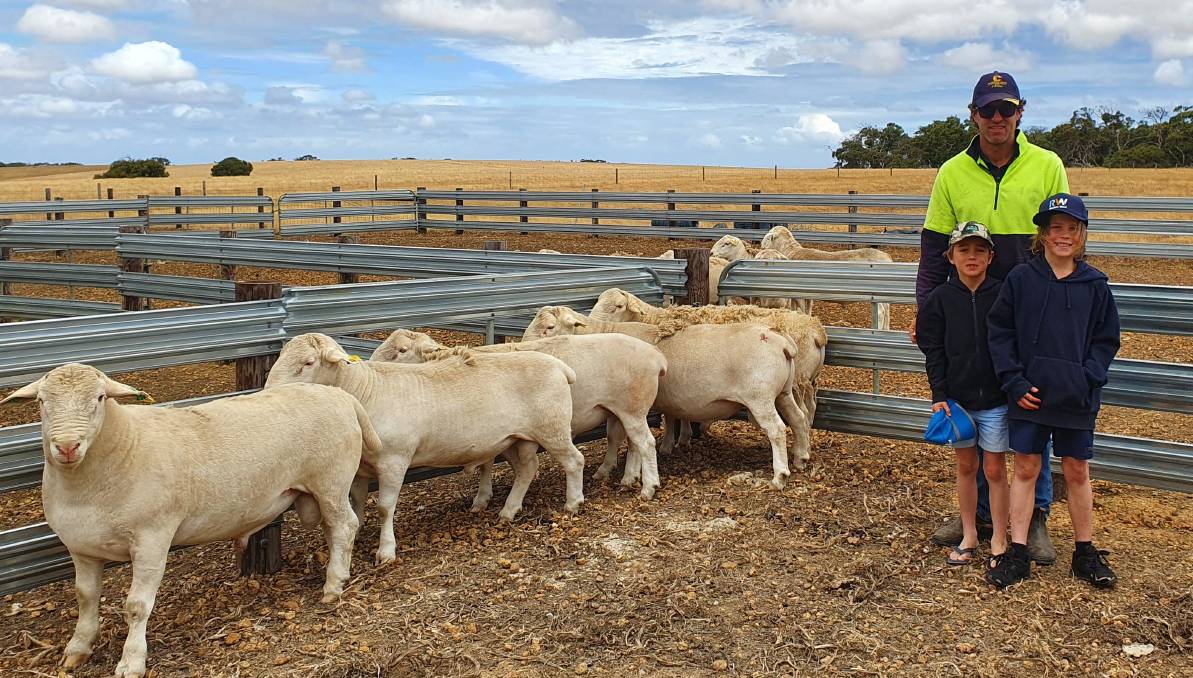 Andrew Fogden, Parndana, is no stranger to shaking up the breeds in his sheep enterprise, with the latest move being to replace his Merino flock with UltraWhites.

Andrew Fogden, Parndana, is no stranger to shaking up the breeds in his sheep enterprise, with the latest move being to replace his Merino flock with UltraWhites.

More than a decade ago, Merinos were the core focus of the farm, until the focus switched to breeding first-cross ewes 15 years ago.

Six years ago, the focus switched again, to running 75 per cent self-replacing maternal composites, and 25pc Merinos. Now, the UltraWhite flock will take the place of this 25pc.

"With where the wool market is right now, often - depending on your micron - the fleece of wool you cut off a crossbred ewe is basically paying for your shearing and crutching costs, you're not really making any money out of the wool," Mr Fogden said.

"We're just trying to get these shedding sheep to be productive and fertile enough to wean enough kilograms of lamb to make them as good as a composite."

The self-replacing maternal composite flock size sits at 3000 head, of which 60 per cent are mated to White Suffolk rams out of on-farm, artificially inseminated White Suffolk ewes.

The remaining 40pc of the self-replacing maternal flock is mated to composite rams.

"(When sourcing composite rams), we've been using a few different studs that are all breeding composites, there are a mixture of breeds within them, and no two rams are the same," Mr Fogden said.

He decided to switch to using UltraWhites in place of the Merino flock on the basis of practicality, in addition to the state of the wool market.

"Our main block is 660 hectares, our second block down the road is 200ha, and we don't have power or a shearing shed there, so we thought we'd try some shedding sheep, rather than having to cart sheep to the main block," Mr Fogden said.

"The farms are only six kilometres apart, so (carting sheep to the main block) isn't a great cost, but it is an extra cost, extra time, and extra labour and potentially an animal health risk, if you don't know what's on the bottom of the truck."

I'm going to phase the Wiltipolls out as soon as I can, I'll look to use them for a year or two to get a few extra lambs, and then if all works well, I should be running a pure UltraWhite flock. - ANDREW FOGDEN

He also sourced 550 ewe lambs from commercial clients of Hillcroft Farms across WA.

The rams will be joined to the ewe lambs in March, for an August lambing.

"We'll priority hand-feed the UltraWhite ewe lambs a bit more than the maternal composites during summer and autumn, to get them up to a good weight for mating (42-45kg-plus), so we can get a bit of a bang for our buck in that first year and a few extra lambs into the system," Mr Fogden said.

WILTIPOLLS SOURCED TO BUMP UP INITIAL NUMBERS ON KI

PARNDANA sheep producer Andrew Fogden has bought 550 UltraWhite ewe lambs as he phases out his Merino flock, but has also bought 270, 6.5-year-old Wiltipoll ewes to join with UltraWhite rams in 2021.

"I'm going to phase the Wiltipolls out as soon as I can, I'll look to use them for a year or two to get a few extra lambs, and then if all works well, I should be running a pure UltraWhite flock," he said.

Mr Fogden bought the Wiltipolls off his brother-in-law, Michael Mills, who also farms at Parndana and initially bought them for a similar purpose.

"Michael is running Australian Whites and is doing the same thing in principle as what I plan to do," Mr Fogden said.

"He started with Wiltipoll ewes mated to Aussie White rams, and now he has enough Aussie Whites going that he doesn't need them (Wiltipolls) anymore.

"He was going to sell the Wiltipolls for meat, but I bought them because I decided it would be a way for me to get started in shedding sheep."

The Wiltipolls will be joined at the same time as the 550 UltraWhite ewe lambs, in March.

Mr Fogden said he expected popularity of UltraWhites to build in the coming years.

"There have been crazy prices for Aussie Whites (stabilised composite breed comprising White Dorper, Van Rooy, Poll Dorset and Texel genetics) recently, there has been huge demand for them, but I think UltraWhites will also attract attention. They are nice, thick, muscular animals," he said.