This month marks one year since devastating bushfires began wreaking havoc on the western half of Kangaroo Island.

WHILE some fantastic initiatives have brought the Kangaroo Island community together recently, the scars from the island's worst fire season in history still plague many locals and will for some time, according to KI mayor Michael Pengilly.

This month marks one year since devastating bushfires began wreaking havoc on the western half of KI.

Mr Pengilly said it was a milestone most locals did not want to commemorate, after the loss of two lives, nearly 100,000 livestock and up to 100 houses destroyed among the carnage.

But there have been events on the island recently, including the Parndana Show, that have brought the community together in recovery.

"About 1900 people attended the Parndana Show, which was just a good, relaxing day for people to walk around and talk," he said.

"Most of the people I have spoken to from the western end seemed in good spirits, but I am very cognisant that there will be some families doing it very tough this Christmas, some that have had no income this year, and they're the ones we are really trying to watch out for."

In the wake of the fires, a KI Mayoral Bushfire Fund was set up, with more than $5.8 million donated to families and communities affected.

Mr Pengilly said another $1.2m round would be be distributed in the new year, while help through the KI Recovery Centre at Parndana was ongoing.

A farm firefighting unit registration day at Parndana held earlier this month was also hailed a huge success, as almost 100 farmers and landholders turned out to register their FFUs with the CFS.

Attendees were also made aware that UHF channel 13 on KI connected FFUs to both the CFS and water bombers during a fire.

"Hopefully this will work well with everyone involved and make more people aware," Mr Pengilly said.

"I have also noticed that every farm ute you see on the island now has a tank on the back. Last year, we put them on when the fires started, but this year they seem to be on there permanently."

During the day, fire-affected local Sabrina Davis also handed out 117 bushfire safety kits, bought with donations made through her Humans of KI Facebook page.

They contained items such as fire-proof clothing, gloves, goggles and respirators.

Ms Davis, who lost her own house and farm to the Ravine fire on January 3, urged everyone to have a bushfire emergency plan in place and be safe this summer.

WATER RELIEF: An Aerotech air tanker dropping water on the Redbanks fire at Nepean Bay on December 6 - one of a handful of blazes on KI already this fire season.

AgKI chairman Rick Morris said the bushfire season was creating some anxiety among farmers, particularly after a few fire events already, but most were better prepared than last year.

"We actually had a fire on the weekend, which started from an old burn pile under the ground," he said.

"We couldn't believe that a pit had been smouldering for 11 months, but there has been two incidences of that happening - it has put people a bit on edge."

But Mr Morris said farmers were also starting to feel a little more positive after "best-ever" crop yields - with canola at three tonnes a hectare or more and cereals 5t/ha-plus - and hay yields 50 per cent above normal, while lambing rates and livestock prices have been strong.

"On our farm though, pasture regeneration hasn't been great, so hand-feeding will begin next month," he said.

"Many farmers will also use containment feeding as an ongoing management option, after seeing such positive scanning results after the fires last year."

Mr Morris said farm rebuilds were at varying levels, while Mr Pengilly said there was still a lot more fencing required, but house and shearing shed rebuilds had become more of a priority, along with shearing. 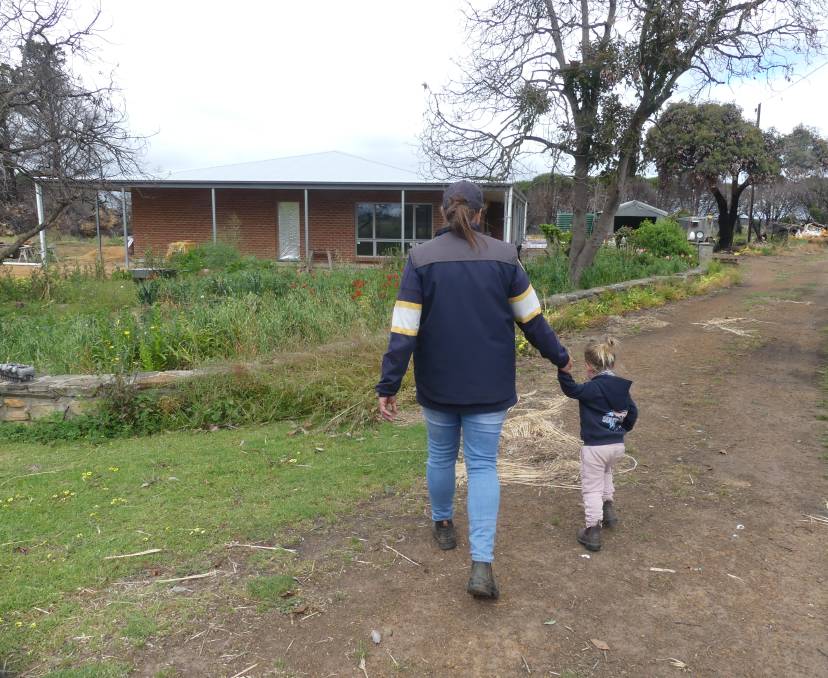 MAKING PROGRESS: Hannah Robins with daughter Celine out the front of the house rebuild at John and Jo Symons' Turkey Lane property, north-west of Parndana.

TURKEY Lane Merinos stud principal John Symons was one such fire-affected farmer shearing rams this week, while in the throes of rebuilding his house at Middle River.

"The labour shortage over here has been a big problem, particularly shearers - we are at least three weeks behind," he said.

He and wife Jo were also hoping to be in their new house by Christmas, but hold-ups had pushed that out to early in the new year.

On January 3, the family lost their house, sheds - including their shearing shed - hay, 2500 sheep and all 45 kilometres of fencing on their 600-hectare farm.

"That day was pretty horrible, the whole year has been really," Mr Symons said.

"But at least we are here to talk about it. And now is the time to reflect on what went wrong and accept that things need to change, particularly when it comes to national parks and roadside vegetation management.

"I am unsure whether the appropriate people have learned any lessons from this, but we can't go through this again in 20 years, the loss was too high.

"We used to see thousands of possums here and now there is none - how is that good for the environment?"