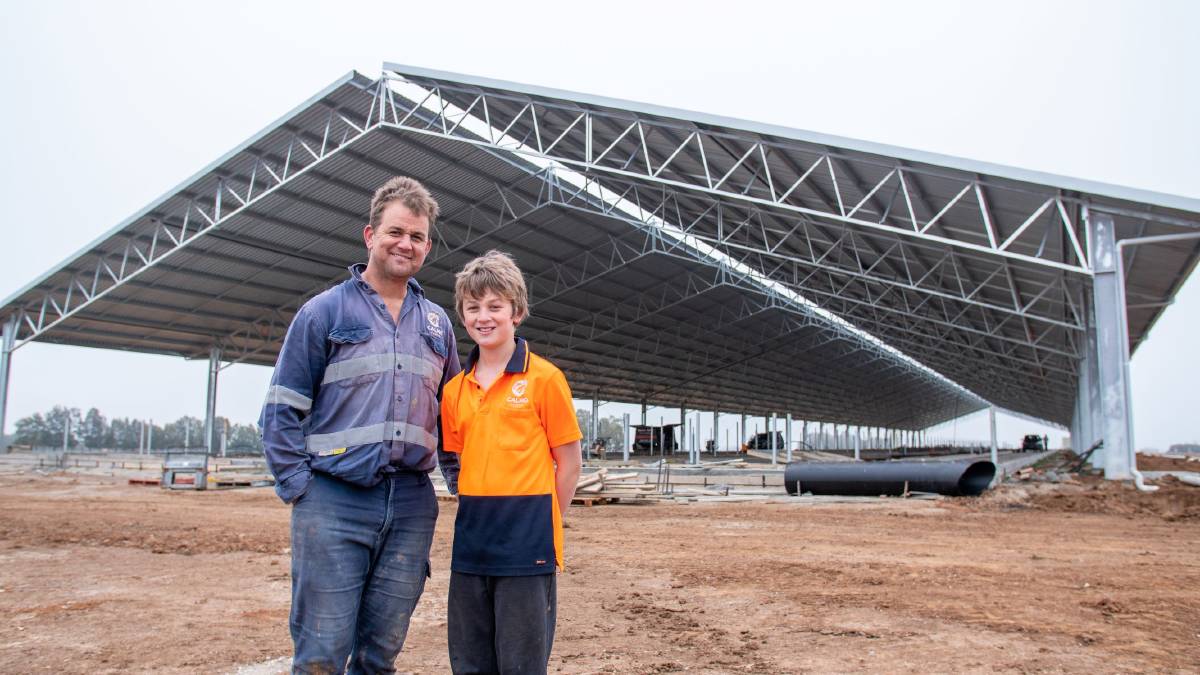 When it comes to business, Jade Clymo refuses to accept the status quo. Growth has driven the success of his family farm and underpinned his passion for the dairy industry.

When it comes to business, Jade Clymo refuses to accept the status quo. Growth has driven the success of his family farm and underpinned his passion for the dairy industry.

His business now milks 1500 Friesians, a herd expansion of almost 115 per cent in the past decade.

"It is not in our DNA to stay as we are, to put a lid on our herd size," he said. "Perhaps we should do it at some stage, but we never have."

Realistically, the concept of capping the number of dairy cows at their Calivil farm has never truly been considered.

Jade's parents, Trevor and Jan, who ran the northern Victorian dairy farm before Jade and his wife Belinda, also endorsed growth. After all, they share the same DNA.

So, in October, when the cows moved into a free-stall American-inspired fit out of an Entegra barn, Jade's parents were supportive of the change.

"They like the growth, they like the progression," he said. "It was probably a bit confronting at the start for them, but now they're happy to sit back and watch it happen."

The Clymo's dairy business trajectory has run counterpoint to the northern Victorian and Australian industries.

Milk production in northern Victoria and the NSW Riverina during the 2019-20 season was down about 5 per cent compared to 2009-10 levels, according to Dairy Australia.

Compared to the highest production year during the past decade - 2014-15 at nearly 2.4 billion litres - production for this region during 2019-20 was down almost 34 per cent.

A plan was 'brewing'

The rise in the Clymo's farm size during the past decade wasn't because they were immune to the climatic and economic pressures which triggered the retraction of the local industry. In fact, it was quite the opposite.

These strains were the catalyst for the Clymos to act on an idea which had been "brewing" in Jade's mind for years.

"With the water and droughts, just the cost of water, it meant we needed to use it better and that just leads to this style of farming," he said.

"An equal (driver) would have been the size of our herd and where we go from here, type of thinking, there's just so much pressure on our grazing platform. We probably nearly exhausted the land we could walk to. That's why we had been buying farms where we could cut and carry fodder from, with the vision that one day we will build this and these farms will be able to supply fodder for that long term."

'This' is a 250-metre-long by 36-metre-wide, 18-degree roof pitch Entegra shed, retrofitted with a US free-stall barn design.

It became home to 1200 of the Clymo's milking herd last month. Their later lactation cows will continue to graze - for now.

Inside the shed, cows have individual sand bunkers where they rest. Feed is supplied via a central corridor.

"Sand was a simple system, gold standard for cow health and we were starting from scratch - not retrofitting sand in," Jade said. "So, we had that opportunity to make it all right for sand from the start."

Up to 90 per cent of the sand can be recycled through the barn's flush system which washes it, with the manure, to an area where it's separated.

For Jade and Belinda, the US- inspired barn is a risk management strategy for their business, while also offering security for further expansion.

"To grow some more, it was either duplicate somewhere with a similar system or go down this path," Jade said. "I suppose it was not the easiest path, but the easiest path would have been to duplicate, but I figure it might just double our problems. When it is wet there's double the tracks, and when it is hot there's double the lack of shade, so we were more attracted to this." Business growth comes with an inevitable increase in staff. The Clymo farm employs up to 16 which meant the methodical operation of the barn made daily tasks easier.

"The really big attraction to this system was the working conditions, which I thought would be more attractive to this generation of workers," Jade said. "Their job is systematic and repeated, it's not in the heat, dust or cold. They're not on a motorbike in the mud, they're on concrete doing the same thing every day."

Ironically, the labour component of the free-stall housed-cow system will be one of only a few aspects Jade and Belinda won't adopt entirely from the US. Electricity is the other.

"Power price and labour costs are the two things we had to be careful of," Jade said. "We can't just replicate what they have because in the US they have very low power and labour costs. This means we haven't gone berserk on a manure system, its quite simple, and the fan settings won't be the same as the Americans. They will come on when it is a bit warmer than they do over there."

"With labour, we have to just try not to replicate everything they do," Jade said. "For example, if there's ten steps to the perfect housed-cow and milk-cow, then we might do eight of them. We're going to find out what the two we don't really need to do are, to save labour."

Jade and Belinda travelled to the US inspecting free-stall barns and questioning dairy farmers about the keys to profitability in a housed-cow system.

But when it came to the finer details of their barn, they engaged US dairy designer Jake Martin.

Jake first designed a barn for an Australian customer 20 years ago and has worked with several dairy farmers throughout northern Victoria and NSW since then.

Doing your homework, was his advice for anyone thinking of taking the leap into intensive housed-cow farming.

"The most important thing for dairy producers to know is that this is a different philosophy of dairy farming," he said. "These facilities require a different way of managing cattle, people, equipment and nutrition."

"Milking parlours operate 12 months each year and up to 24 hours each day," he said. "In general, confined cattle will produce more milk, consume more feed and produce more manure than grazing dairies. Each of these require increased effort.

"The bottom-line? From a generalised, over-simplified point of view, grazing farms require less people, equipment, utilities, and daily jobs. The opposite is true for confinement farms." Peace of mind: The barn means Jade no longer has the worry of how the weather could affect the farm's year-round milk production.

Design Consultant Charles McCalman from Entegra, which constructed the shed, said it was the first time he'd had a client duplicate an American free-stall barn design, without alternations to the structure.

"Because it was based off a set design and set plan, in my perspective as a salesperson I was a bit limited in the flexibility of the design," he said. "But one thing we could do was make larger bays which helped the economy price per square metre. Through efficient engineering and experience we were able to design and engineer cost effective structures without compromising quality."

Jade and Belinda won't be the last to look to the US for their barn design, according to Charles.

"I'm sure in the next five-to-ten years in Australia, as far as barns go, especially northern Victoria which has a similar climate to California, farmers will tend to follow-suit," he said.

The Clymo's operate 1295 hectares in the Calivil district with their children Libby 15 and Fynn 13, were they also grow corn, vetch, lucerne and cereals for silage.

They buy in grain but are "very close" to self-sufficient for fodder, thanks to owning 3200 megalitres of irrigation water entitlement.

Removing most grazing from their dairy business, and fundamentally using their land to grow crops, will require a change in mindset, said Jade.

Growing better quality and more feed will help reduce costs, while the barn itself will enable Jade and Belinda to better measure individual cow feed consumption.

"Before, our system was ad hoc," Jade said. "When they are grazing you aren't sure how much they are eating. Who knows what our old system was converting at [feed to milk] but we think it might have been about 1.2kg of milk to 1kg of feed. We've been to farms, one in particular in America, which was 1.7kg of milk to a kilo of feed. Whatever that number is, that's how successful our system will be."

Outside of cost savings, Jade factored the return on investment to come from a "conservative" per cow increase of 0.5kg of milk solids a day. Currently the 650-700kg live weight herd average is 2kgMS/day/cow. Jade said production will rise in the housed system because of cow comfort and improvements in feed quality and consistency. Seasonal "dips" in fertility were also expected to disappear.

Uniformity and certainty are at the heart of the Clymo's dairy barn. From the "cookie cutter" stalls sitting side by side, to the regimented feeding and milking times, thanks to the ease of the barn's working conditions.

Jade is no longer plagued by concerns about how the weather could affect their year-round milk production.

"Flat milk without infrastructure is a risk," he said. "If you are producing flat milk, it means you are producing a lot of milk in winter. If it gets wet, you have a lot of your production pinned on those months and your cows will be doing a lot of grazing, a lot of walking and a lot of pugging. I didn't want to have that feeling of, 'Will we get through?' Or, 'What happens if we get another two inches of rain in May and then another two inches?' We had to pay a bit more to get rid of that feeling, but now I don't have that feeling."

Managing risk provides the business with security, according to Jade.

For someone with business expansion pumping through their veins, it's a reassuringly stable foundation from which he can continue his family legacy.

For more data on ROI in dairy infrastructure call 1300 296 206 or visit www.entegra.com.au