THE right feed at the right time and good breeding has resulted in "strong" lamb performance at Melecca Farms. 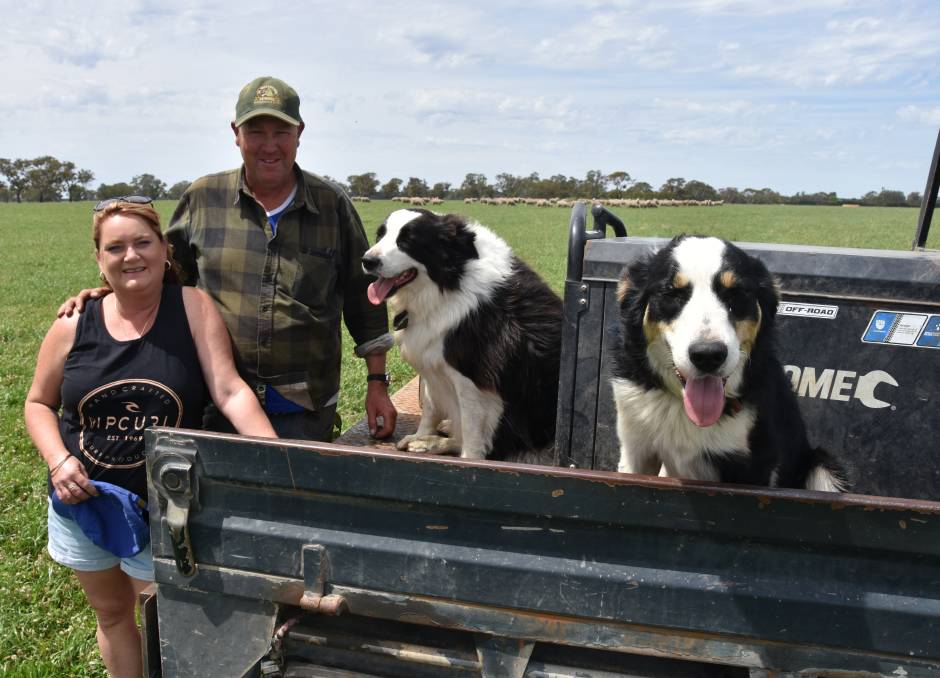 Mr Widdison and wife Carolyn, with daughter Bec and two employees, run about 1600 first-cross breeding ewes, alongside 180 breeding cattle and 70 hectares of potatoes, at their 550ha Melecca Farms property in the South East.

The property has about 180ha under irrigation, watering the potatoes and crops, such as lucerne (for hay), annual pastures, and sorghum (for silage).

"We use a pasture mix of annual ryegrass, balansa and shaftal clover as we think it does the best after the potato phase, when the ground has lost its structure from being worked up," he said.

Mr Widdison said the irrigation essentially "drought-proofs" their livestock operation, "particularly at lambing and weaning if the season hasn't been favourable and the non-irrigated areas haven't come along".

Being able to always finish off their lambs is paying off, with Melecca Farms averaging more than $200 a head the past three years, mainly through Mount Gambier market and some over-the-hooks.

Mr Widdison puts the demand for their lambs down to breeding from "really good sheep" and his feeding regime.

White Suffolk rams from Kent and Rose Martin's Chickerloo stud at Kalangadoo were put out with them just last week.

"If you have got big sheep, you are less likely to run into lambing trouble," he said.

"And if you give them plenty of feed and look after them, with vaccines and drenching, they will perform."

"I feed out good quality barley to my pregnant ewes in the autumn, with some hay and silage, generally in paddocks with not a lot of ground feed," he said.

"Monitoring their feeding helps control the size of the lamb and gives the ewe enough energy to avoid pregnancy toxaemia and be fit enough to lamb.

"It also allows us to rest the pasture paddocks in preparation for lambing."

The lambs drop in May onto paddocks with feed - if the break has occurred - or onto irrigated pastures, if there's been a late start.

Weaning is generally in October, also onto annual pastures.

"The annual pastures seem to be the best to finish the lambs on," he said.

"Normally we wean mid-October, but this year it was the end of October because I waited until we were crutching - the lambs were probably a little bigger than hoped, but thankfully we weren't penalised for it.

"This year we didn't want to produce big lambs because the buyers didn't want them - I think many had lost markets, like the cruise boats, due to COVID-19.

"Supermarkets and exporters have paid well for lambs up to 32kg - which is what we hit at 6-7 months.

"My crutcher said these were the strongest lambs we had ever produced."

The Widdisons have another 800 lambs to sell before Christmas.

"From mid-October through to Christmas around here is just crazy," Mr Widdison said.

"We just finished planting potatoes a fortnight ago, plus we're setting up our solid-set sprinkler system, which is very labour intensive, while still trying to sell off lambs and doing hay.

"We had 25 millimetres of rain last week - the best rain we have had for two months - which will probably ruin the hay that we cut last Wednesday, but it will help our pastures and the potatoes - so I guess we save a bit of fuel there."