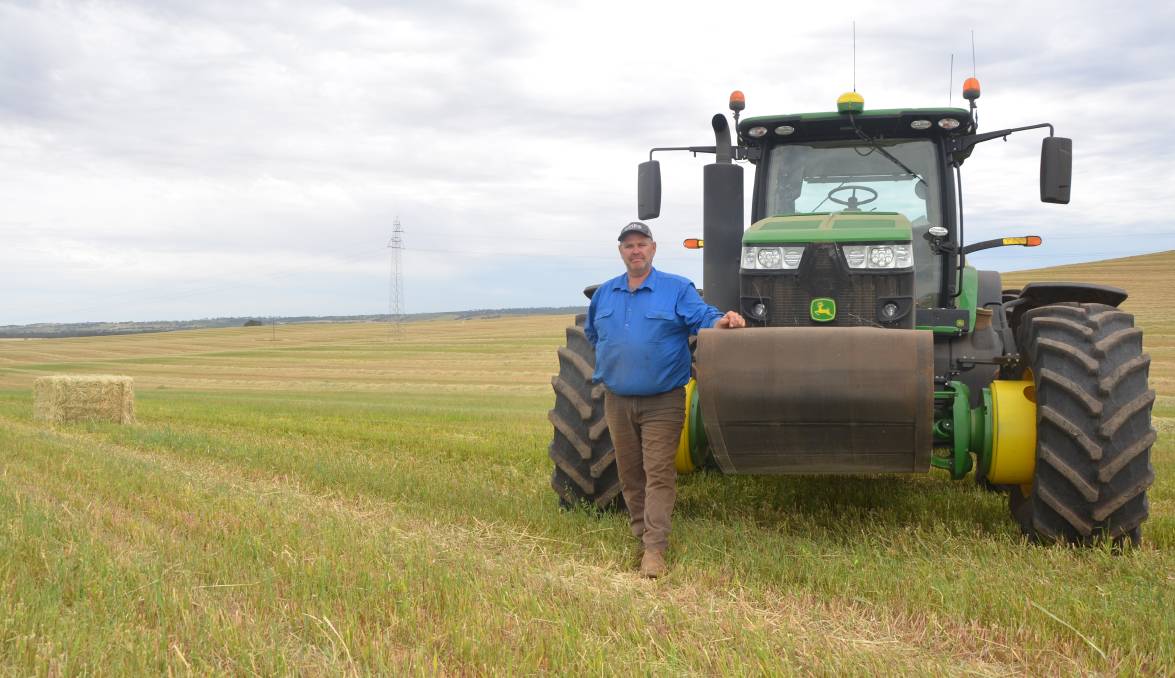 Hay producer and contractor Anthony Lines said much of their personal product would be shedded this year.

WEATHER-DAMAGED hay usually bound for the export market is threatening to cause a glut of supply in a domestic market already witnessing low demand.

WEATHER-DAMAGED hay usually bound for the export market is threatening to cause a glut of supply in a domestic market already witnessing low demand.

Persistent rain has negatively impacted the quality of huge volumes of hay in the Mid North, with many producers looking to shed their bales until demand in the domestic market picks back up.

In a hay report from Dairy Australia , the Central SA and Mallee regions were reporting a significant amount of weather-damaged new-season hay with a big variance in quality, while new-season straw was already showing staining.

"Demand continues to be subdued and new-season hay prices still very hard to gauge with no real trade taking place," the report stated.

"Reports suggest prices for good quality hay may increase due to the significant amount of weather-damaged hay made this season.

"Farmers are wanting to purchase stock, in particular cattle, to convert the extra paddock feed they have rather than needing to source hay. This is a huge shift in demand to last year."

While prices had remained steady - $200 a tonne to $250/t for cereal hay, $400-$480/t for lucerne hay and $90-$140/t for straw - there were reports of growers that would normally produce hay for export storing their bales and planning to sell domestically due to the damage.

One such grower was Anthony Lines, whose family business in Laura produces about 500 hectares of oaten hay for the export market each year.

Their contracting business Hay SA also deals with between 7000 and 10,000 bales of oaten hay a year.

Although the Lines family had achieved yields of 4-6t/ha, Mr Lines said less than seven days between most rain events had made cutting, raking and baling a challenge.

"The longest break we've had so far is 12 days and we only managed to get 40ha in the bale after it had been cut," he said.

"That's the only hay we've got in a bale this year without a rain on it."

Mr Lines predicted a lot of oaten hay would be rejected by exporters this year and they would look to store the majority of theirs.

"We had 83 samples cored in late October and only three were accepted, so that's an indication of what the hay season's been like," he said.

"For the exporters to process it, it has to be high quality. I think the Australian domestic market is fairly quiet this year with NSW having rain. Two years ago, they weren't cutting any hay at all and I've heard reports they're cutting 5-7t/ha of hay themselves this year, so they won't be in the market.

"We haven't got many feedlots around and the ones that are around would be well and truly catered for."

Mr Lines said with some export prices being offered under the cost of production, many would look to store until demand returned.

"You're either going to take a loss or store it for future years and no doubt, being Australia, there'll be areas in drought within the next three or four years so it might have to stay in a shed or under cover until it moves," he said.

Down on the Fleurieu Peninsula, Grant Jolley, Jolley Farms Aust, Victor Harbor, said they had enjoyed a terrific growing season but rain had caused difficulties when it came to cutting, raking and baling.

The Jolley family produce meadow, oaten, lucerne and wheaten hay, as well as silage and vetch.

"We've got the silage finished - everybody has had terrific cuts and some of the stuff you can get a second cut from so it's good that way, but it's hard to cure hay because it's just not drying out.

The Jolleys use some hay in their dairy and beef enterprise, also selling to farmers and supplying small square bales of meadow hay to horse owners and fodder stores.

Although frustrated they hadn't been able to start baling by the start of November, Mr Jolley said quality had been good while early yields were promising.

"We do big square bales of silage and we're getting about 15 bales/ha on those," he said.