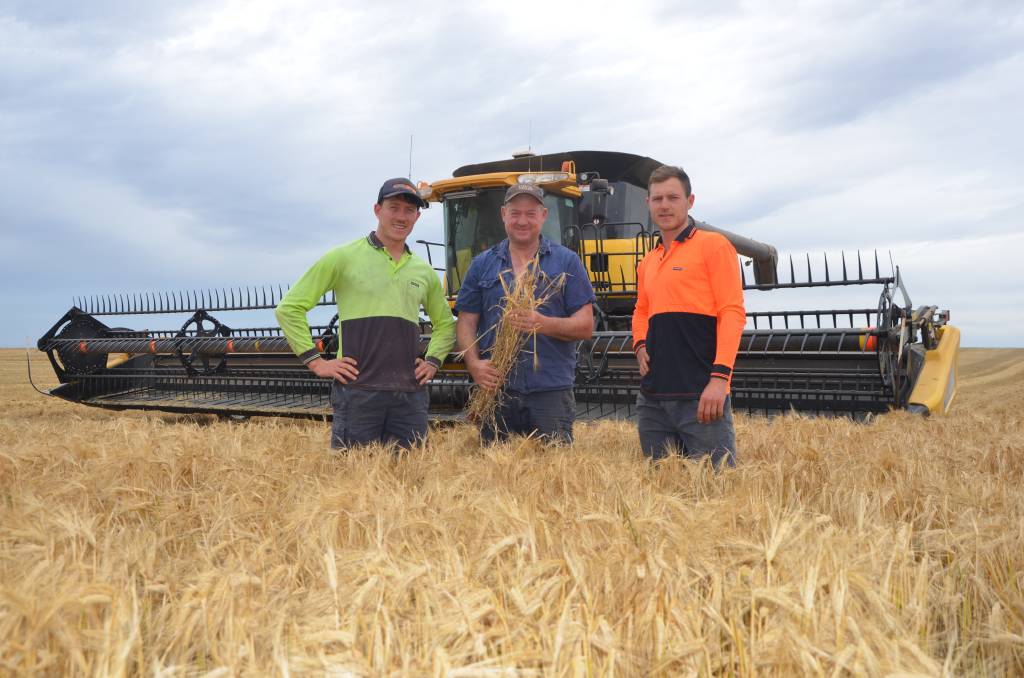 Philip Combe (centre) was proud of his son's achievements on the footy field this year and was hoping the family's harvest would be just as successful. Campbell (left) won the SANFL's highest individual honour the Magarey Medal, while Will (right) won the Breakthrough Player award, all whilst commuting to Adelaide from the family farm at Crystal Brook three times a week for training and games.

Older brother Campbell, a three-time Mail Medal winner with the local Crystal Brook Roosters, was still processing his Magarey Medal win - the highest individual honour in SA football - after a sterling year with North Adelaide in the SANFL.

Campbell and younger brother Will commuted from the family farm at Crystal Brook to training and games in Adelaide three times a week.

While both were disappointed with the team's grand final loss to Woodville West Torrens, a Magarey Medal and Will's Breakthrough Player Award were some consolation for a year of hard work on and off the farm.

"We're also lucky that we've got the support of Mum and Dad and the family back here. Dad took up the slack when Will and I travelled down, so that certainly helped."

The brothers run the family farm with parents Philip and Ingrid and both see their future in agriculture.

"I see myself being full-time on the family farm in the future and if I can still have the opportunity to play down at North Adelaide for a couple more years, I'll pursue that," Campbell said.

"As soon as I left school all I wanted to do was farm, so agriculture will definitely be where my future lies," Will added.

"Some of the shallower soil on the hills felt the pinch of the dry spell through June and July, but some our flat country will be going close to five tonnes a hectare," Campbell said. Campbell and Will Combe on the first day of harvest at their family's Crystal Brook farm.

The only dampener on a sensational season may be the intermittent rain that caused a frustrating start to harvest.

A heavy rainfall event and some scattered showers restricted them to 100ha of barley in their first week in late October, Philip said.

While early yields were above average, he was unsure if rain would cause any quality concerns on the later harvested barley.

"We've also got wheat, lentils, beans and vetch still to reap," he said.

"We desiccated the lentils and vetch in late October, while the wheat still had a bit of green in it at that stage."

DESPITE a disrupted start to harvest, the ADM Port Pirie receival site had taken 20,000t of grain, primarily barley, by the end of the October, according to national accumulation group manager Damian Bradford.

"The amount of deliveries we've taken has been weather dependent," he said.

"If we'd had a clear run weather-wise the daily tonnages would be building significantly, but it has been very stop-start.

"Quality has been generally good on barley and wheat. Barley has been ranging between Barley 1 and Malt."

Mr Bradford expected deliveries to ramp up in mid-November as more crops south of Port Pirie and east of the Flinders Ranges started to come off.

ADM's Port Pirie site received 60,000t last year and Mr Bradford was expecting that figure to be "well and truly" exceeded this season.

One of the early starters in October, Port Germein's Barry Mudge, said the family had experienced their fair share of weather-related hold ups in the first month.

By November, the Mudges had harvested most of their barley, started on wheat and finished their lentils.

Mr Mudge said they'd been getting 3t/ha barley yields and around the 2t/ha mark on wheat, despite a less-than-ideal end to the growing season.

"We had a pretty hard finish here," he said.

"Our crops were ripening during a pretty warm and dry period during the first three weeks of September. When they were basically all finished, it started raining and hasn't really stopped.

"Unfortunately that rain came a bit late to rescue the crops, but they're still coming off quite reasonably and the quality has been OK.

Growers near Jamestown are shooting for average to above-average yields, despite some scattered disease and pest issues.

He said while late rain had stifled hay quality, cereal and legume crops were generally looking good, though some had been knocked by disease.

"We're starting to see late incursions of stripe rust and leaf rust in crops that didn't have a preventative septoria fungicide earlier in the season," Mr Richmond said.

"I hayed some peas off because they had powdery mildew developing and were half hayed off as it was.

"On the plus side, we're getting some good grain fill. The vetch is on its second flush - the first flowers have filled those pods and this rain has bought on new growth and flowers.

"That's handy in some places because vetch was frosted and now we've got two crops of vetch in one paddock."

Mr Richmond covers a 50-kilometre radius extending from Jamestown and said there was some variation within his patch, with the eastern tract around Hallett and Whyte Yarcowie still reasonably dry.

"There'll be lower yield potential there because things didn't fill during the growing season and they also had some heavy infestations of Russian wheat aphid late, which has caused some damage," he said.

Kerin Agencies Nutrien Crystal Brook agronomist Iain Tod said it was a "mixed bag" across the Mid North, with some benefiting from late rain after a dry winter and others not so much.

"It's creating a problem for harvest, but summer weeds are also going to be an issue moving forward," he said.

"I don't think it's been enough to spoil any grain, but it's causing a problem with some regrowth in legumes.

"It's a decision that farmers need to make - do they crop top now or wait."