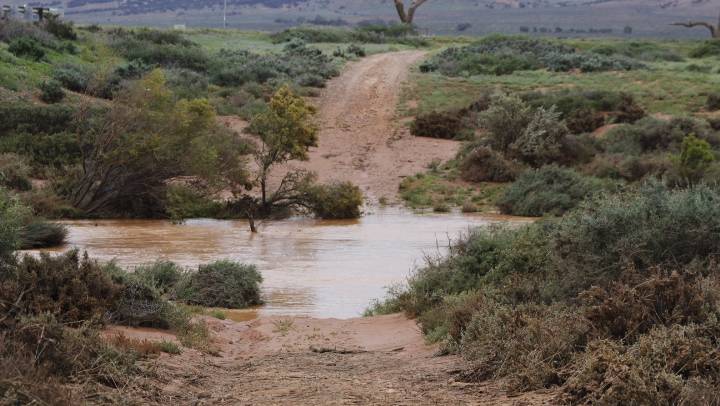 THE band of rain that came across the north of the state and tracked down into the northern Mallee in the past week has put a dampener on the potential of harvest yields, with up to 87 millimetres falling in the Upper North region and up to 50mm across many other cropping districts.

For the week up until Tuesday, Quorn had received the highest total of 87mm, while Oodla Wirra (51mm) and Appila (46mm) also recorded strong falls, according to the Bureau of Meteorology.

The Carn family received 87mm at their home block just south of Quorn.

Susan Carn said all of their grazing land east and north of Quorn had good falls.

"We also have Umberatana Station north-east of Copley, which only had 12mm, but that was a good start," she said.

But the rain was too late for their crops at Quorn, which had struggled from the lack of winter rain.

"We still hope to get some seed back," she said.

"This has been the second big rain we have had this month, with another 36mm in the first week, making it 125mm so far for October (about a third of the average yearly rainfall in total)."

Although there was some damage to fences, Ms Carn said the two big rains have resulted in "amazing" feed for their sheep, with plans to also buy cattle in the works.

"We will never say no to rain, that's for sure, as it has been a real Goyder's Line season," she said.

Dion Woolford crops at both Kimba and Buckleboo and was trying to remain positive, despite more than 150mm of rain in spring.

"We had 25mm on our property south of Kimba and up to 50mm at Buckleboo, which will certainly help next year's crops," he said.

"I don't think the crops used much of the rain we received in late September (because they were dying off from a lack of rain), let alone these latest falls.

"If anything, the crops are starting to green up, which may prove troublesome come harvest.

"But the rains have filled the heads out better in a lot of our crops - we won't be average yields, but to even be talking in the vicinity with the season we have had is a win, particularly with the way prices are."

Our hay is well and truly ruined as far as export goes ... it has been [on the ground] since mid-September. - DION WOOLFORD

Mr Woolford said later-sown crops around Kimba would still benefit from the rain, but their export hay was "well and truly ruined".

"We are hoping to be able to scrape it off the ground when it dries again for our sheep, but it has been there since mid-September," he said.

They had started harvesting early-sown Spartacus barley last week when the rains came, and Mr Woolford hopes to restart at the end of this week.

"But after that, we will just have to wait and see," he said.

In the Mid North, Caltowie recorded 51mm, Redhill 39mm and Booborowie 34mm; while just over Goyder's Line, Robertstown recorded 26mm and Renmark in the Riverland had 19mm.

Robertstown cropper Simon Schmidt welcomed the rain, after he sowed the last of his crops in August.

"We had about 140 hectares we didn't sow at the break of the season," he said.

"So when rain was forecast in August, and all our other crops were looking pretty miserable and patchy, I thought why not finish it off?

"We had never sown in August before, but now I wish we had done more.

"It is going to be our best crop this year, if I can keep the (Russian wheat) aphids off of it."

Mr Schmidt said the first half of the season wasn't so favourable.

"We have some really good crops, but we also have some very average-looking crops, particularly in the eastern districts where it has been dry for so long," he said.

"But there is still some wheat in those paddocks, which I have sprayed twice for RWAs, when others would have walked away.

Mr Schmidt said they have received more than 175mm of rain since August and was happy for more.

"We still have a lot of green crops around here," he said.

"We do plan to spray some peas for harvesting next week, as they haven't gone that well, but we expect to be harvesting over Christmas and well into January."

A FORECAST of sunny, warm days is not on the horizon, according to the BoM.

Meteorologist Paul Bierman said later today and into Friday, another low pressure system would be moving over the state and was expected to produce widespread showers and thunderstorms.

"On Friday, a strong southerly airstream will produce below-average temperatures across the state and fresh to strong south to south-easterly winds, with showers also continuing and thunderstorms in the eastern districts," he said.

"Once that system passes on Friday, we do have a few drier days across the weekend until Monday."

Mr Beirman said another change was expected to come through from late Wednesday next week, but not a lot of rainfall was forecast.

"The outlook for November remains above-average for rainfall in SA," he said.

"But November is usually a dry time of year, so 'above-average' doesn't necessarily mean it will be an exceptionally wet month."