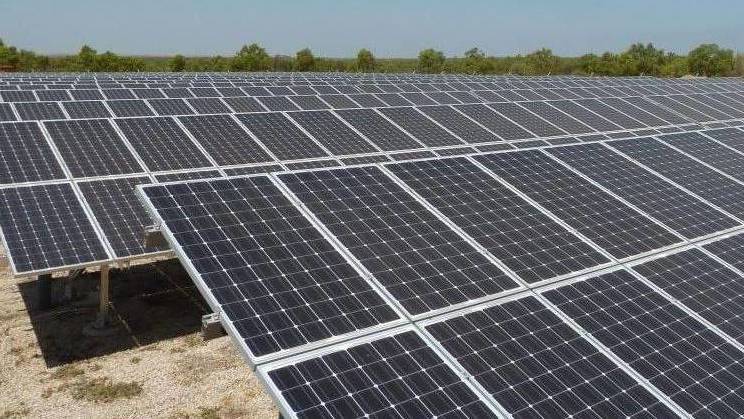 If built, it would be the world's biggest solar farm and would supply up to 20 per cent of Singapore's electricity needs.

Building of the vast Sun Cable project in the NT outback is scheduled to begin in 2023.

BUILDING of the vast Sun Cable project in the outback of the Northern Territory is scheduled to begin in 2023.

Announced this week, Sun Cable wants to build its solar farm on the Newcastle Waters Station, in the west Barkly, after looking at four areas in the region.

Newcastle Waters is one of a number of NT stations owned by Consolidated Pastoral Company.

In a statement to the ABC, CPC chief executive Troy Setter said: "CPC fully supports Sun Cable and its exciting project to develop renewable energy capture on Newcastle Waters Station in the NT".

Sun Cable needs 12,000 hectares of pastoral land to build a 10-gigawatt farm of solar panels to provide power via a yet to be built undersea cable to Singapore.

If built, it would be the world's biggest solar farm and would supply up to 20 per cent of Singapore's electricity needs.

The proposed route of an undersea power cable from the outback of the NT to Singapore. Map: Sun Cable.

Newcastle Waters is a beef operation covering more than a million hectares.

Grok Ventures and Squadron Energy have taken positions as co-lead investors on this project.

Grok Ventures is the family investment firm of tech billionaire Mike and Annie Cannon-Brookes, with Squadron Energy under the leadership of mining magnate Andrew 'Twiggy' Forrest.

The project has already won major project status from the federal and NT governments.