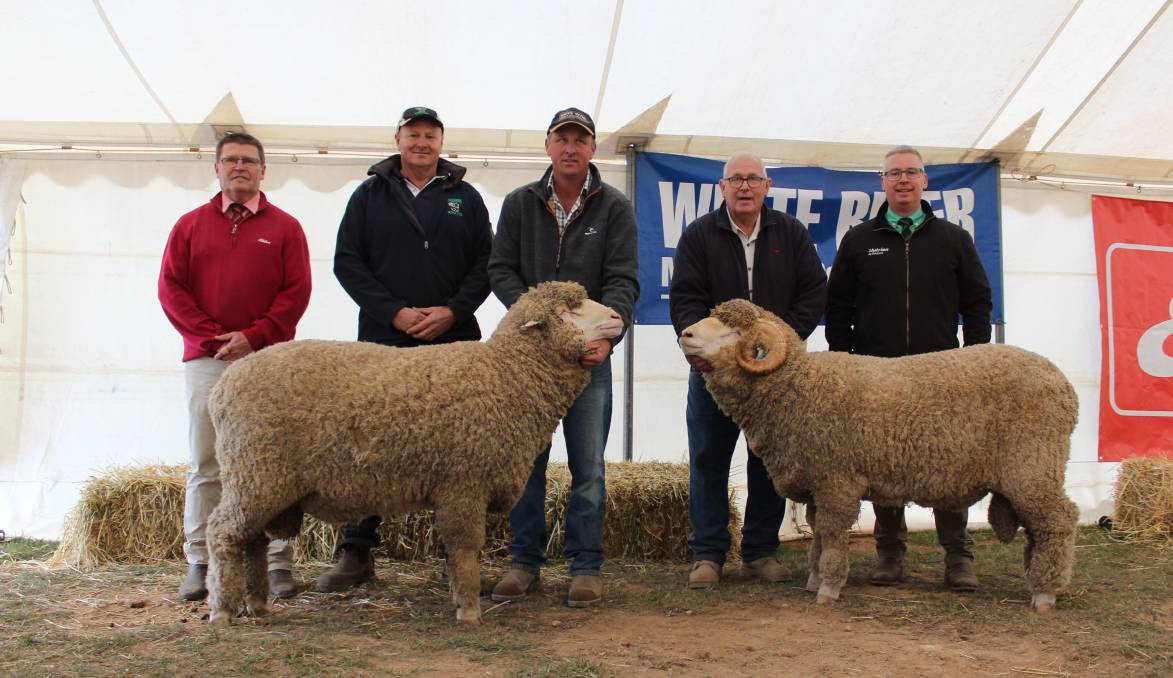 While the average was back on last year's record result, given the uncertainty of the season with lack of rainfall and low wool prices, along with non-attendance from some interstate buyers due to COVID19, the result was particularly strong for the Daniell family.

In a first for White River, the sale was live streamed on AuctionsPlus, with 84 people logging online. Combined with the 45 registered bidders in the marquee, the resulting competition ensured the strong result.

It was the Lot 4 ram that topped the sale at $15,000, selling to regular repeat buyer, Nick Lienert from Oak Farms Merino & Poll Merino studs, Buckleboo.

The 19.2 micron son of Moorundie W252 had a fleece tests of 2.9 standard deviation, 15.1 per cent coefficient of variation and 99.8pc comfort factor.

Mr Lienert described the sale topper as, "a great ram with well-nourished wool and excellent topline, shoulders and structural correctness."

"It is a very well-covered ram with excellent nourishment which are traits we need in our sheep for the type of country we have," he said.

Three bidders- two at the sale and one on AuctionsPlus - were determined to secure the lot 6 Poll Merino, ensuring it achieved the sale's third highest price of $8250.

It was his first time purchasing at White River and he couldn't have been any happier with the outcome.

"This ram impressed me with his stylish, well-nourished white wool, typical of the Moorundie

Lairg Station, Sheringa, was again the stand-out volume buyer at White River's sale from the 39 bidders who were successful.

The volume buyer through Auctions Plus was Driscoll McIllree & Dickinson from Nhill, Vic with 30 rams averaging $2813.

The Daniell family was very pleased with the overall sale result, as well as the bonus of 13mm of rain on sale day.

"We were so happy with the result of our sale. It's been a tough year over the state for most areas due to the lack of rain, but it was great to see some rainfall throughout the day," Wes Daniell said.

"We thank our wonderful and loyal bunch of clients, new buyers and supporters who helped us achieve the excellent average of $2,469 and achieve a total clearance of the 187 Merino and Poll Merino rams," John Daniell added.

"White River is renowned for performance and high-end genetics and the competition was strong right from the word go," he said.

"It was pleasing to see AuctionsPlus being well utilised throughout the sale to allow for interstate parties the opportunity to bid in the current COVID19 environment."