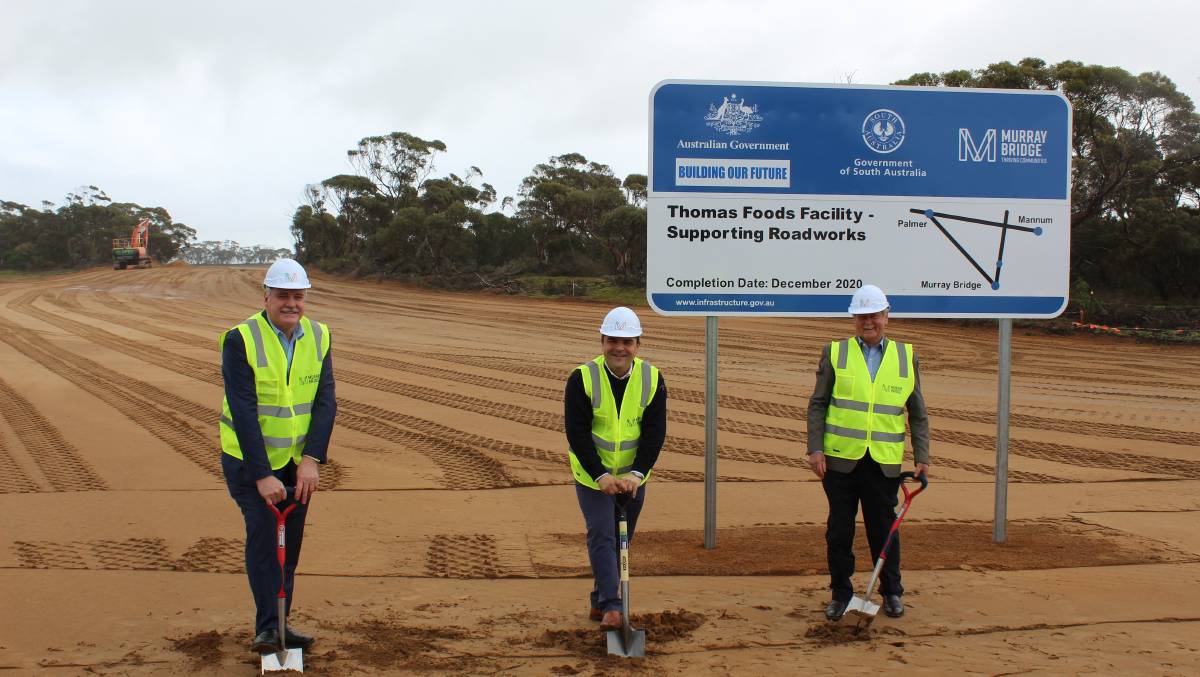 A major step in Thomas Foods International's planned new multi-million dollar abattoir at Murray Bridge occurred this week with the first sod turned on the new public access road to the facility.

A major step in Thomas Foods International's planned new multi-million dollar abattoir at Murray Bridge occurred this week with the first sod turned on the new public access road to the facility.

Last month the Rural City of Murray Bridge approved the meat processor's plans and awarded the tender for the roadworks to Downer EDI Works Pty.

RELATED: TFI's Murray Bridge abattoir on track for start date in second half of year

The federal and state governments have each contributed $7 million, to deliver road access to the abattoir to be built six kilometres north of the city.

The new junction at Mannum Road will include protected turning and deceleration and acceleration lane to assist with traffic flows along Mannum Road.

Work on the 2.2 kilometre road is expected to be completed by the end of the year.

"With the support of the federal government, we are getting these regional projects underway to keep more South Australians in a job and create a safer, more efficient regional road network," he said.

"This project will provide safe road access to the new processing facility for its anticipated 2000 staff (when fully operational) as well as the higher productivity freight vehicles transporting livestock to the site, and processed goods to domestic and international markets."

"This facility is a vital part of not only the Murraylands but the wider industry in SA, helping to create and sustain jobs," he said.

" Construction starting on the $14m State and Federal Government investment into road access for the new facility is an exciting step forward for the TFI rebuild."

"And it's not just the TFI facility to benefit from these roadworks. Upgrading this road infrastructure is opening new opportunities for industry in the area as well as making the road safer for all motorists," he said.

Mayor Brenton Lewis said building the infrastructure was an important step in supporting the retention of a significant employer and industry for the region.

"TFI is one of our largest employers and they are investing several hundred million dollars in this new state-of-the-art processing facility that will employ about 2000 people once its fully operational," he said.

"TFI has shown great loyalty to our community and an unwavering commitment to re-establishing operations in our Rural City.

"Council is proud to be playing a significant role in this infrastructure project to help make it happen."