Throughout five generations, the Dabinetts have maintained a uniformed attitude to farming, and although each generation made its own stamp on the family enterprise, a diversified and dynamic approach has remained. 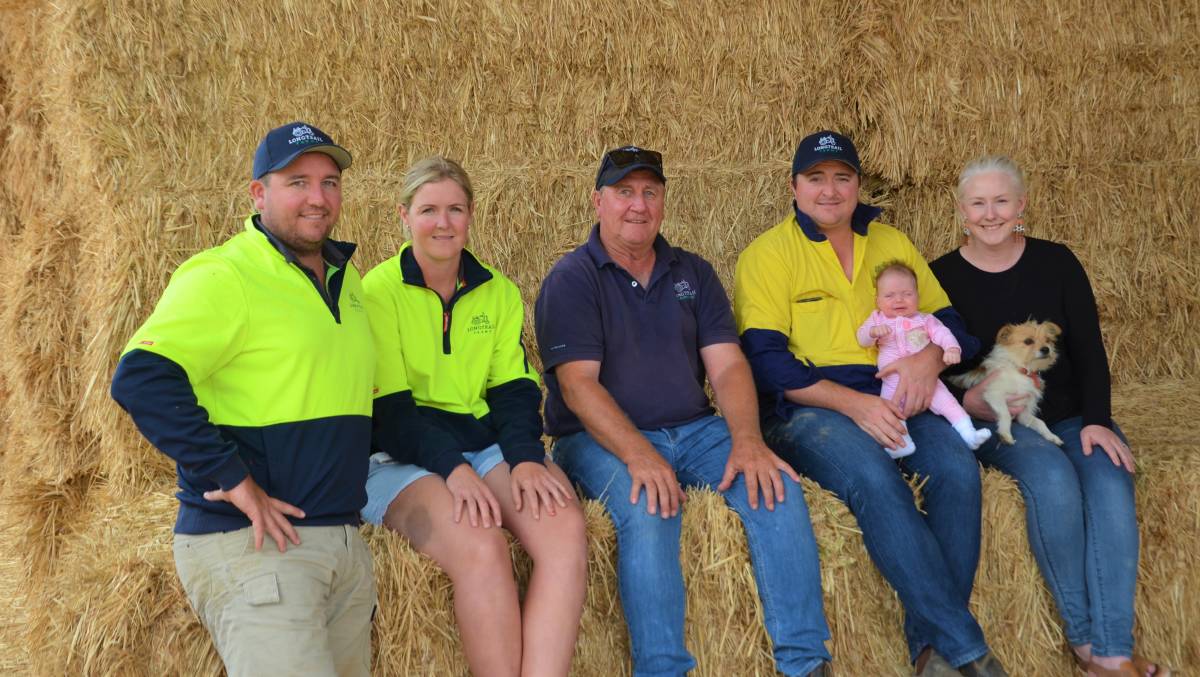 Throughout five generations, the Dabinetts have maintained a uniformed attitude to farming, and although each generation made its own stamp on the family enterprise, a diversified and dynamic approach has remained.

David and Louisa Dabinett arrived in SA from England in 1886 and moved to the Mallee just before 1920 after a short stint farming in the Mid North.

It was Charles, their youngest son of many children, that began the Dabinetts contribution to agriculture at Parilla.

But, continuing to farm in the area until Russell and Leanne and their fifth generation children, Wade and Nick Dabinett arrived, was not without its challenges.

The farming future for the Dabinetts could have changed many times since they arrived in the Mallee, after David was killed in a horrible horse accident near Lameroo and his son Charlie moved to Parilla in 1922.

Charlie began sharefarming and in 1932 he bought the farm which is still occupied by his grandson Russell.

Charlie and his wife Ida May had cropping, sheep and cattle but also tried their hand with chickens and selling eggs and cream.

But in 1968, Charlie died and the farm had not been transferred into his sons name and Max was forced to pay inheritance tax to buy the farm back.

"It was a defining moment for the family farm because if Max did not have the passion to keep it going, that could have very well been the end of it for us," Russell said.

"Max was a good saver and managed to find the means to buy the farm," he said.

"We were just lucky the farm was not lost."

Max married Marie and took over the family farm in 1946 and continued to grow wheat, and graze sheep and cattle with a few pigs.

"The mechanical changeover for them was a big part of it and it is what changed the direction of farming for generations to come," Russell said.

Max remained active on the farm until 1987 and Russell began purchasing farms in 1975 to 1985 while in partnership with his brother Lynton.

"After my brother and I went our own way with farming ventures, that is when bigger changes began happening on-farm," Russell said.

"The horticulture industry started up in the area about five years before my brother and I went our separate ways and I already had some experience in the industry," he said.

So, Russell grew carrots from 1995 until 2005 and developed an irrigated cropping program.

He said horticulture was a relatively easy area of farming to step into if water was available.

"I was of the thought that making your land more productive with irrigation was easier than buying the farm next door."

Since 1999, the Dabinetts' largest contribution to the horticulture industry has been potatoes.

They started with a 30-hectare site but has since grown to 300ha, with this managed by Russell's son and fifth-generation farmer Nick, who returned to the farm in 2002. "We have continued to grow potatoes for high productivity of the land," Russell said.

"We grew onions for three years but they use a lot of water and turnaround was very slow - it is almost a 12-month turnaround between planting and receiving cash flow. Most people cannot run a business like that," he said.

"Since we have irrigation, we also tried sunflower crops about 15 years ago and in later years, linseed crops too. We have contemplated hemp but it is still a very young industry."

It is access to the Mallee Prescribed Wells aquifer which allows the Dabinetts to try their hand at "pretty much any crop", according to Russell's other son Nick.

But Nick also said growing irrigated crops had its difficulties.

"The issue we have is the aquifer water is about 90 metres below. The pumping costs for irrigation in the Mallee is higher than that of someone pulling water out of a river or an irrigation channel or flood irrigation," he said.

"That pump cost and cost of water determines or limits what crops we can make a margin out of.

"That is why high-yielding vegetable crops have been developed in the Mallee."

Nick said in the past five or more years, there had been a significant "margin squeeze" on growing potatoes.

"It can be tough - supermarkets are certainly putting on the squeeze with prices so the only way to stay ahead is to be more efficient," he said.

"Mallee-grown potatoes are extremely water efficient and we harvest almost year- round but while you can manage rainfall through irrigation, there are many elements you cannot, such as frost and heat.

"Across the business, each part has its own set of risks, so it's about finding a balance."

Creating a balance through on-farm diversification has been the key element, Nick says.

"In the Mallee you cannot just run a blanket approach operation because it is so variable," he said.

"We can have clay flats and clay rising loam ground to just sand dunes and an entire farm of non-wetting sand all within a 20km radius.

"We need a pretty dynamic attitude while making decisions about what to run on-farm."

The Dabinetts' cropping program is managed by Wade.

The cropping program grew from sharefarming in the 1990's to 800ha and has since reached 5000ha.

"We were slow to move into export hay but it seems to fit and we have increased hay production to about 10 per cent of our cropping program," he said. 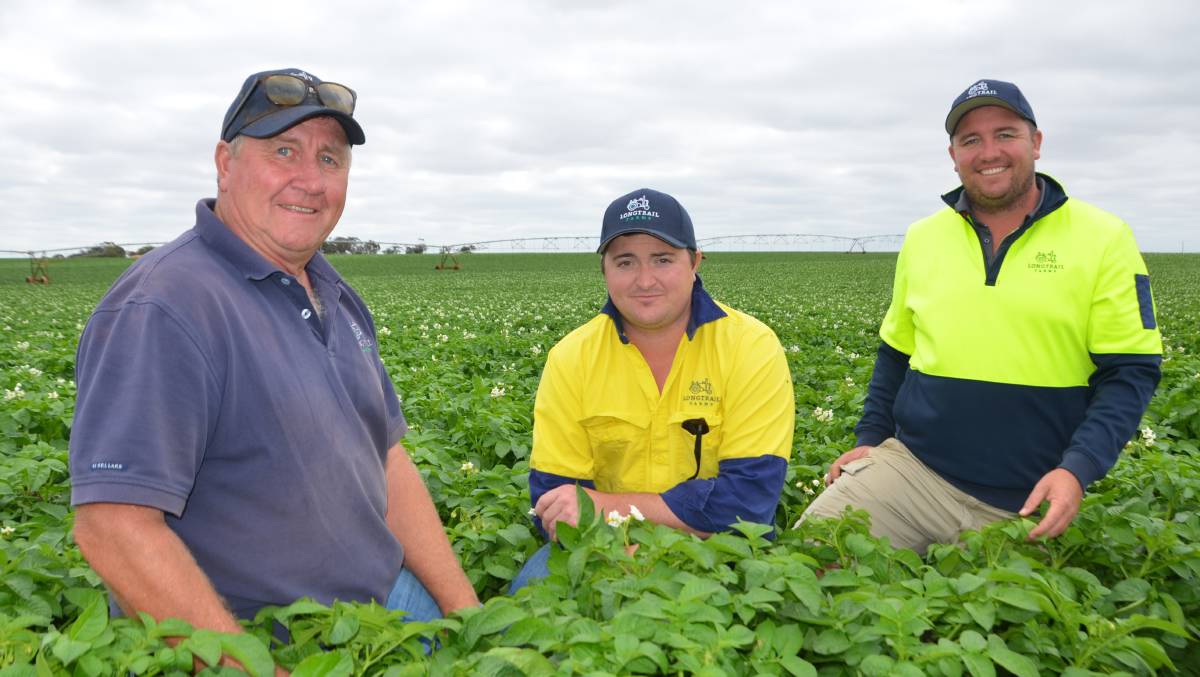 DRIVEN TO SUCCEED: Russell Dabinett and his sons Wade and Nick in an irrigated potato crop.

Wade returned home to the farm in 2011 after he had gained experience in the grain trade, storage and handling industry.

"I moved back to the farm because I realised I had a passion for farming at a farmgate level rather than necessarily in the export or trade area," he said.

"I believe the value of our industry is created on-farm and not at the other end."

But Wade still saw value in being involved in the wider grains industry too, so he accepted a position on the Grain Producers SA board in May 2014.

"I was passionate about the grains industry after my previous employment before working on the farm - they probably felt I had something to offer with bigger agenda items that were being discussed at the time," he said.

"I was 27 when I joined the board so I went in fresh-faced, but sitting around a table with industry leaders was a really good experience for me."

Four years ago, Wade took on the role of GPSA chair.

"The role of chair has really given me a different perspective about farming," he said.

"Every time I speak to someone in that context of being chair, I immediately bring back their experiences to my own business, so it has helped me to think about how I approach certain issues.

"After all the great discussions with farmers about issues they face, I guess it has fundamentally changed the way I look at a lot of things.

"Access to genetically-modified crops is a big issue and it is time for those who have no farm management skills to stop telling farmers what they can and cannot grow."

Wade said he would continue to be a part of GPSA to help strengthen its already "very strong" voice for the grains industry.

"It is important that it is instilled into everybody that grain producers are the backbone of the state's economy," he said. 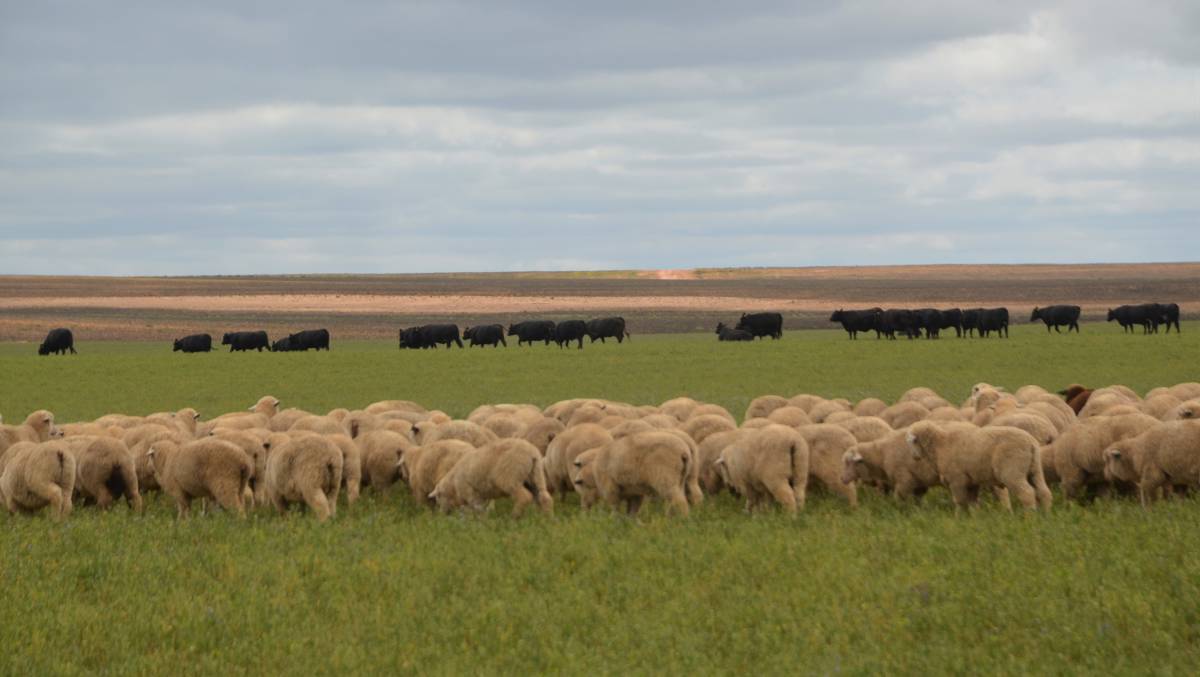 DIVERSE OPERATION: The Dabinetts run sheep and cattle to compliment their cropping and horticulture enterprises.

Livestock have remained an integral part of the Dabinetts' enterprise since 1922 and will continue to be for the foreseeable future.

Russell said since some paddocks in the area were not well-suited for cropping, a "less-risky" alternative was needed.

About 2000 Merino ewes were maintained until the mid-2000s, after agistment opportunities in Vic were cut short and numbers were decreased.

"We cut back for about 10 years to just manage a core breeding flock but now we are back over 2500 breeders," Russell said.

"In the Mallee you cannot just pigeon hole a farm as cropping or livestock, it needs to have both to maintain a diversified approach," he said.

"I was a shearer for a number of years and kept sheep going because it helped keep the farm as efficient as possible in the bigger picture."

"The family have been in and out of cattle since the beginning - as soon as feed runs out, the cattle go," Wade said.

"Cattle are an opportunity-based part of the business, so if there is plenty of tucker then we invest but when it turns to drought conditions, we don't," he said.

About 750 head of trade cattle are on-farm at present, including trade steers, heifers and cows.

"Depending on what feed sources are available and if we have any waste produced and what is available for purchase in the marketplace, will determine what mix of cattle we choose to run," Wade said.

"We bought some good lines of heifers recently at a dispersal sale with an intention to bring them on-farm, mate in May and sell as pregnancy-tested in-calf heifers," he said.

"Given the drought, we thought it would be disappointing to see a good line of heifers taken to slaughter, so it was an opportunity to mate the heifers and sell down the line as breeders."

The amount of hay cropped each season has also been increased to efficiently manage livestock feed.

"We believe it is just as economical to feed hay through stock as it is to sell it on the market - we are also able to utilise potato waste in a containment area as well," Wade said.

While the Dabinetts are driven to remain a family business, Wade said diversification and professionalism were mandatory to becoming a successful corporate family business.

"We consider ourselves a humble family business but it is a very diverse farm that employs a reasonable amount of people too, so we have corporatised the family business model to make sure that is sustainable into the future," he said.

"Keeping a family business running smoothly is harder than actual farming but it comes down to the passion within us all and what drives that passion could change ten times a week."