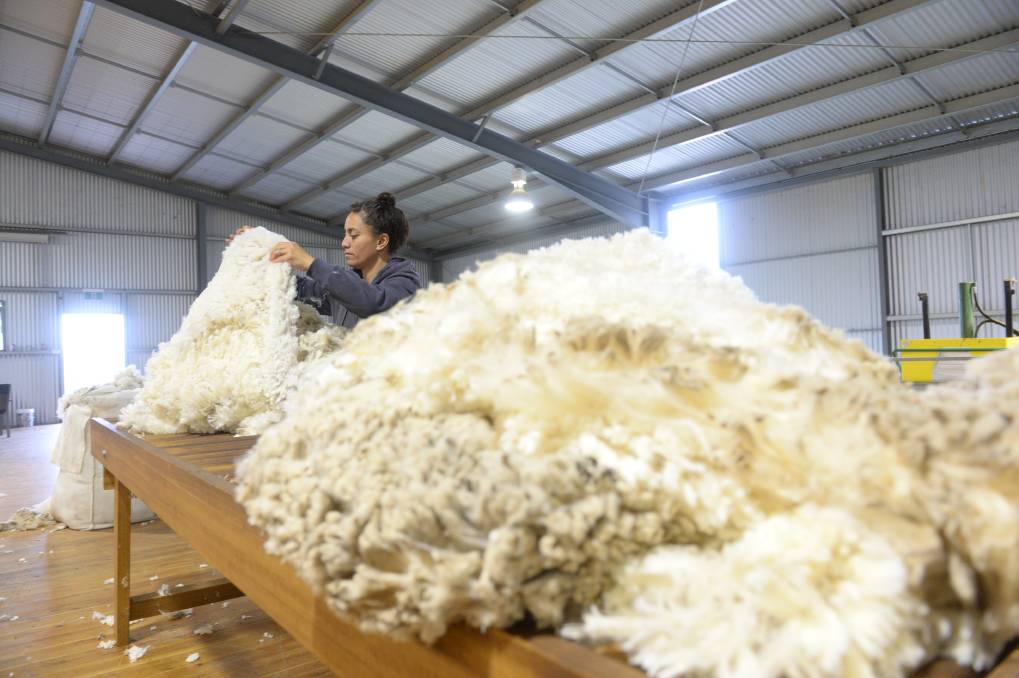 Auction week 24 sees what is called a large offering these days with 48,000 bales rostered.

A sudden increase in rostered quantity for auctions next week was a trigger for buyers to run and hide.

With the week-in, week-out cycle seemingly broken, and the mindset of buyers particularly in China very fragile and skittish, a sudden increase in rostered quantity for auctions next week was a trigger for them to run and hide.

Initially, most people expected a reasonably strong week, however, the jump in quantity together with a weaker US dollar punctured the balloon.

Prices held up reasonably well on Wednesday with only a US 2 cents a kilogram drop in the overall market with just the crappier types being passed-in as buyers avoided them.

On Thursday things didn't improve and US13c/kg was wiped off the indicator as a plethora of fine and crossbred wool swamped the market.

Medium Merino fleece and skirting types are selling well, but at the fine end, quality is key to the limited demand floating around.

For crossbred wools, there is a bit of demand, but there is also a bucket load of quantity emerging as is normal for this time of year, so prices are beginning to struggle.

Cardings are cruising along like a teenager with headphones on, doing their own thing and oblivious to other types of wool that are having trouble.

So, a decrease of US15c/kg for the week translated into a decline of AU38c/kg because the American dollar took a dive earlier in the week - much to Mr Trump's delight.

Auction week 24 sees what is called a large offering these days with 48,000 bales rostered.

This will be followed by 40,000 bales in week 25 and then we head into a three week recess for Christmas.

So, 88,000 bales seems like a big ask - until you realise there is not another auction in South Africa for the year, and Argentina growers are not keen on selling too much at present, and then we have three weeks with no auctions at all - and suddenly 88,000 bales over five weeks is probably not enough to feed the machinery.

Buyers will have made up their minds however that such a "big" sale should be an opportunity to purchase cheaper wool, so they may be sadly disappointed if growers vote with their feet and withdraw large chunks before the sale.

So much so, that we could end up with a scramble for wool and higher prices as a result.

No doubt some will be just waiting for the new year and see what the market is doing then.

Production numbers based on the Australian Wool Testing Authority's greasy testing appear to be on track with last year, however a lot of shearing has been brought forward, and there have not been too many rain delays anywhere in the country lately, so it would be fair to assume the production numbers will fall off the inevitable cliff in coming months.

The wool market is not following the weekly pendulum any longer, but other markets are swinging wildly from day-to-day.

Just what the traders like as it allows them to get in and out respectively, and some cynical people might suggest the media stories are being manipulated to facilitate this.

Only one day after the market went into meltdown over fears that the trade deal may not be signed until after the US election, which pushed the US dollar lower, the talk was suddenly about China and the US moving closer to an agreement of a "Phase One" deal, and that it could be sorted by December 15.

The next round of tweets from a DC based account hinted that everything French may cop a tariff in retaliation for the Google tax which is being proposed.

No doubt this would have instigated much muttering and expletive laden cries over croissants and coffee, but Mr Trump is just doing what he was elected to do, and that is to protect American businesses.

Slightly disruptive to world trade and international relations, but in his own way he is trying to help his constituents.

A lot of wind and hot air, most of which will pass without too much reaction or consequence, apart from some media headlines, and another swing of the emotive currency and equity markets to keep the trading fraternity happy.

In other good news for the wool industry, there has been a demand from the union of Father Christmas workers that all official uniforms be made from Merino wool.

It has been widely reported in the Arctic press that there are two major reasons for this demand according to spokesman S. Claus.

As a local resident of the polar region for much of the year, global warming and the environment is obviously a very important topic, and so wearing a uniform made from natural fibres and doing the "right thing" for the environment is of paramount importance.

Secondly, Merino wool provides the performance required to enable these workers to do their job safely and comfortably.

Given the range of temperatures, they operate in across the globe, something that provides warmth when travelling in an open vehicle at night and is also cool enough to wear when near the tropics, or down-under is important.

Because of repeated entry into high fire-risk areas such as chimneys, a fire-resistant material is considered a non-negotiable safety requirement.

Using a fibre that can be woven or with new technology even knitted into a suit jacket structure to provide comfort, yet still drape nicely on a fuller figure, but not wrinkle when nursing children on one's lap, ensures the workers maintain a suitable degree of aplomb.

Having a uniform that is easy-care, machine washable and naturally resistant to stains and odour will enable the workers to retain their jolly nature whilst listening to countless requests and promises from hot and sweaty excited children.

The spokesman also requested that the collar and cuff trims be made from 100 per cent Merino based fake fur to avoid unnecessary animal cruelty complaints.

Given the large number of Father Christmas workers around the world to satisfy the ever-increasing tide of consumerism, a very large number of uniforms are expected to be ordered.