AUSTRALIAN dairy products are not the only Australian dairy export experiencing strong demand in China. 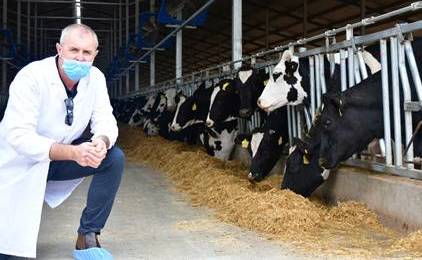 AUSTRALIAN dairy products are not the only Australian dairy export experiencing strong demand in China.

A recent dairy trade delegation of Australian organisations to the 2019 China Dairy Expo in Tianjin found opportunities to increase the number of live cattle exports as well as expanding bovine semen exports and a push for joint research.

Genetics Australia export manager Rob Derksen has attended the past five Dairy Expos in China, as part of Australia's National Pavilion arranged by Austrade, and said the 2019 Expo was by far the most promising.

Australia has been a minor exporter of genetics to China where the market is dominated by North American and, to a lesser extent, European exporters.

"It has been frustrating for GA that while the Chinese are very happy with the performance of Australian heifers, they have not had an opportunity to access top Australian genetics while US genetic suppliers have had significant growth," Mr Derksen said.

"If China is to achieve the aggressive targets of its milk industry development plan, Australian genetics also need to be imported."

In January 2018, GA appointed an exclusive China distributor and access to Australian genetics became a reality.

GA's distributor is based in Tianjin so it was an ideal opportunity to promote the strengths of the Australian industry to visitors to the Expo.

More than 200 buyers attended a Sino-Australia Breeding Platform Forum where Australian organisations presented on a range of issues.

The seminar was repeated around major dairy provinces in China.

"There is a real appetite to know the strengths of the Australian cow and get access to Australia's top proven and genomic dairy bulls," Mr Derksen said.

"They see Australia as having a progressive and advanced breeding industry and the fact GA is a cooperative established more than 60 years ago is a real plus."

But he said it had been challenging to show Chinese buyers an alternative to the US Holstein Total Performance Index.

"US genetic companies have done an excellent job promoting TPI for many years, but we are beginning to get real traction with the Australian Balanced Performance Index as it includes many traits of real interest to Chinese farmers," he said.

DataGene's Peter Williams presented on heat tolerance and feed efficiency and said he was surprised by the strong interest.

"The world class research done in Australia, particularly on heat tolerance and feed efficiency, is of real interest in China," he said.

"I was surprised how well they fed their cows but a great deal of their feed is imported adding increased costs, so they need an efficient and moderate size dairy cow."

A third of China's dairy industry is in central to southern provinces where heat and humidity have an impact.

"We received many questions on the research in Australia and interest in the heat tolerance ABV," Mr Williams said.

"These traits will not only help dairy farming in Australia but also in countries such as China where heat stress can have a negative impact on milk production and fertility."

Mr Derksen said Chinese leaders were keen to collaborate with Australian researchers to benefit both Chinese and Australian farmers.

"Australia's dairy industry has world class scientists and facilities to conduct research and if we cooperate on research and development initiatives and attract offshore research funding, I can see benefits to make both industries more productive while continuing to build a strong relationship with our largest trading partner," he said.

The trend to drinking yoghurt and high-quality dairy products has made many of the large Chinese dairy enterprises take more notice of the quality and type of milk needed.

"This adds opportunities for breeds such as Jersey and Australian Reds, breeds well established in Australia," Mr Derksen said.

There is a real appetite to know the strengths of the Australian cow and get access to Australia's top proven and genomic dairy bulls. - ROB DERKSEN

Australian heifers are held in high regard and the opportunity to produce quality heifers for export to China is strong.

The delegation visited a number of regions where expansion was underway and Australian heifers were wanted.

"There appears to be recognition that to get quality heifers from Australia the price paid will need to increase," Mr Derksen added.

Mr Derksen advised farmers who previously supplied export heifers or have been toying with the idea to consider using sexed semen from the highest rated Australian bulls.

"There is a great opportunity to take advantage of growth and interest in Australian genetics and there has never been a better time to produce surplus heifers; this demand will be here for a few years yet," he said.

"China will demand better quality heifers but the tools available to farmers today such as sexed semen and genomic testing will allow us to get more replacements from our best cows and also create quality surplus export heifers," he said.

"I encourage all dairyfarmers not to miss the boat and to seize the current opportunity."