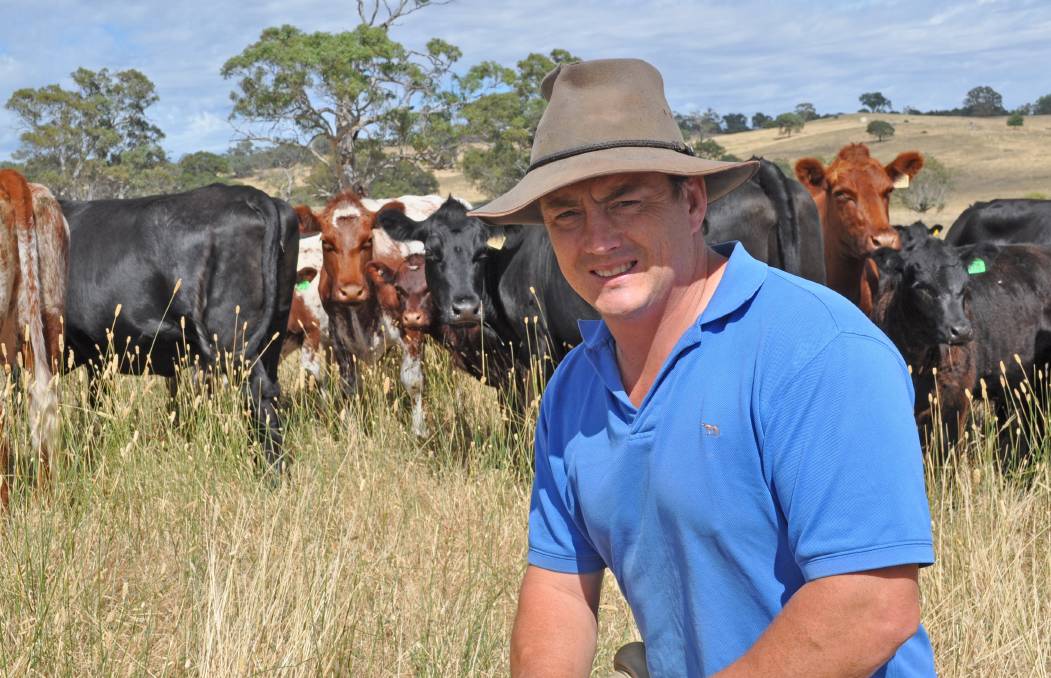 Data from a weather monitoring station installed on Michael Evans' Flaxman Valley property has proven to be highly useful in determining if rain tallies and soil moisture are supportive of pasture growth.

Data from a weather monitoring station installed on Michael Evans' Flaxman Valley property has proven to be highly useful in determining if rain tallies and soil moisture are supportive of pasture growth.

This then helps him make decisions about feed budgeting and stocking rates.

"Having this extra information takes the emotion out of the decision to sell stock," he said.

Mr Evans has 2000 hectares across properties at Flaxman Valley and Eden Valley, and runs about 120 Angus cattle (having previously run Shorthorns), with bulls sourced from Shea-Oak Rise, Tanunda.

If we grow 10 per cent less grass, we will look at destocking by 10pc. - MICHAEL EVANS

Mr Evans aims to produce lambs weighing between 20 kilograms and 22kg dressedweight, which are sold to processors in late spring and into summer, with animals below the target weight sold to feedlotters.

Mr Evans said decisions about stocking rates would be made in mid-September based on the growth of pastures - mainly phalaris, as well as some ryegrass and barley grass - influenced by the soil moisture profile, which is sitting at 65 per cent, and also by rainfall. Both measurements are captured by the weather station.

He said destocking would also be based off dam levels.

"Dams will be low this year, it will be the first time ever we'll likely have to destock because of water."

Last year, based on data showing low soil moisture pointing to little pasture growth, Mr Evans began selling cattle earlier than usual, in late August, with numbers dropping by nearly 100, from a herd size of about 200.

He usually would have retained them through the spring and summer.

"We destocked cattle last year (rather than sheep) because cattle were a lot less profitable than the wool and sheepmeat enterprises," he said.

Mr Evans said at least 10 nearby farmers used the data from the weather station, but he said the installation of new stations would be beneficial to ensure information was more localised.

Data provided on the server is also converted into trend graphs, with the information from a number of variables combined to produce a sheep flystrike index, a sheep chill index, and estimates of plant available water and spray conditions.

BAROSSA Improved Grazing Group technical facilitator Brett Nietschke said while four weather stations installed on farms in the Barossa were already a valuable resource for farmers, there was still work to be done to maximise the efficacy of data provided to producers.

One station is located on Michael Evans' Flaxman Valley property, with three others on farms at Keyneton, Koonunga and Moculta.

Each station collects a variety of weather variables at 15-minute intervals, with this information then transmitted to an internet server, and made publicly available.

Mr Nietschke said there was not yet an established "cut-off point" to help producers make decisions based on certain weather readings, due to a large number of variables, but looking at past data was helpful.

"(Cut-off points) depend on the season, the soil type, and the forecast, but looking at moisture readings from 12 months ago has definitely been a trigger for local producers to think about stocking rates," he said.