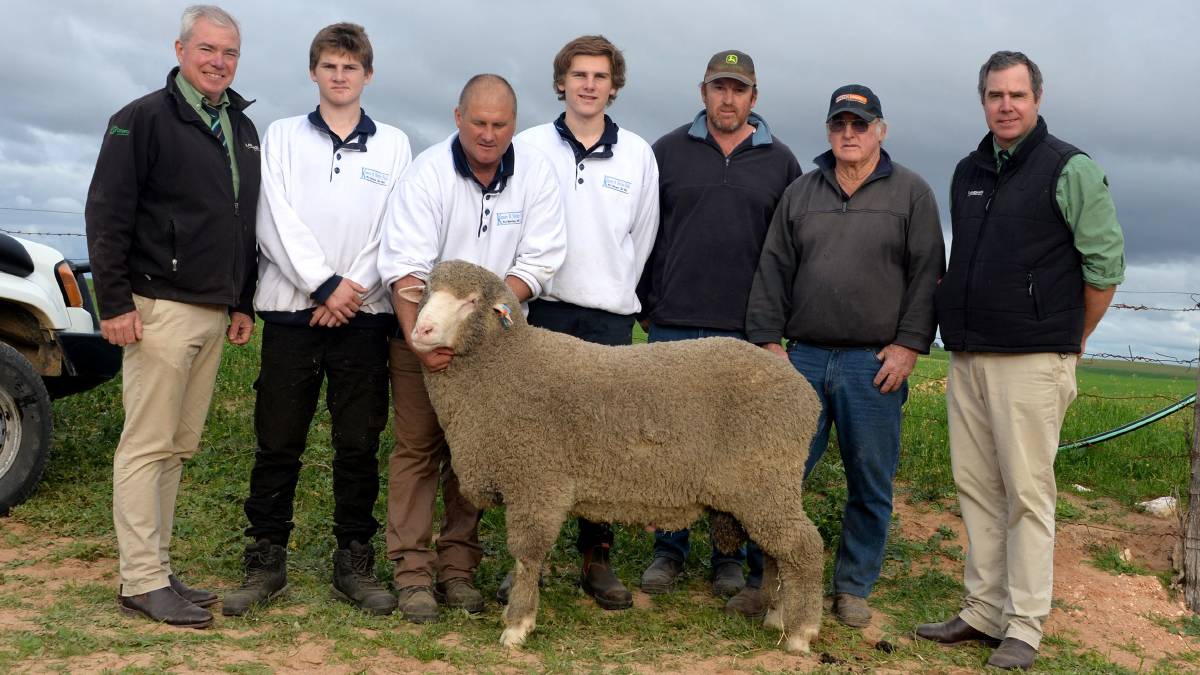 The top end competition was exceptionally strong at last Friday's sale at Sandalwood, with 20 of the first 50 selling for $4000 or more.

However, it was the bidding strength in the middle of the sale that had the biggest bearing on the lift in sale average from 2018 with 38 per cent of the offering sold in the $2500 to $4000 range.

There was still plenty of value buying options. Thirty percent of the rams sold from $800 to $1500,

Overall Paul and Justin Boughen and their families sold 192 of 200 rams in the main auction for a $2528 average.

The large-framed, brilliantly structured ram with good carcase traits will be a valuable addition to their commercial flock of 1600 ewes.

The 19 micron ram had a wool cut of 8.32kg for six months growth, along with wool tests of a 3.0 standard deviation, coefficient of variation of 15.8 per cent and comfort factor of 99.8pc.

"We choose a top one most years to breed our own rams. With this ram, it was the overall package he presented; size, wool quality and cut, growth and bodyweight, plus structure and balance," Dennis said.

The ram will be shown at next month's Royal Adelaide Show before being delivered to Mindarie.

The sale topper was sired by Tamaleuca 88, a ram which the Boughens bought at the 2017 Hamilton Sheepvention sale, which has had a big impact on Kamora Netley Park's flock.

"Buyers today were clearly looking for wool cut and quality, and this ram's progeny certainly stood out for that and were highly sought as a result," Justin said.

McPiggery compensated for missing out on the sale topper with the $6600 second highest price ram, another Tamaleuca 88 son.

"The ram is breeding well, producing progeny that are cutting very well and have wools with extra nourishment. We are now able to put some of its genetics back into our stud, while getting the bonus of a top outcross at the same time," Mr Crook said

For the fourth year in a row Cavanagh Farms, Tintinara, were Kamora Netley Park's biggest buyers.

Naturally we are both delighted and humbled by that level of support, especially from the many regular clients who have been supporting us for so long. - Justin Boughen, Kamora Netley Park

The stud has been blessed with a much better season than 2018 and Justin Boughen said it was a "fantastic result".

"Naturally we are both delighted and humbled by that level of support, especially from the many regular clients who have been supporting us for so long," he said.

Landmark conducted the sale with Leo Redden, Richard Miller and Gordon Wood rotating on the rostrum.

Mr Redden said it was the best offering he had seen in his 17 years attending the sale.

"The evenness is exceptional and they clearly display the top quality and enormous productivity that clients have come to value in these sheep,"he said.