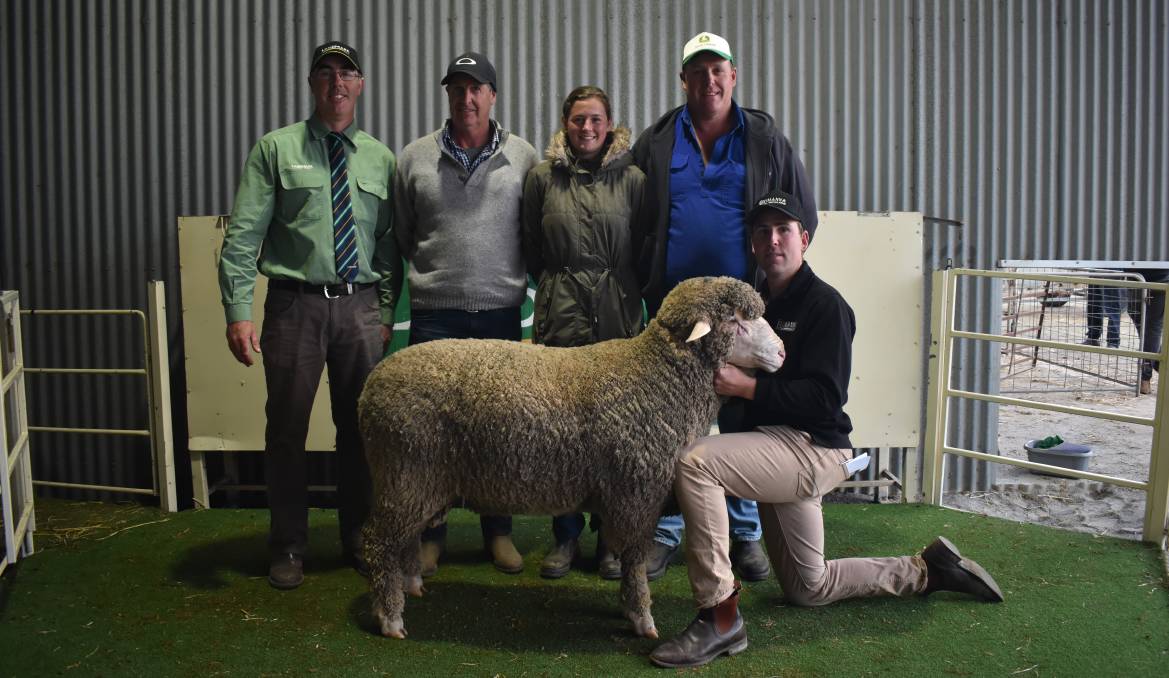 An investment in genetics paid of at the Brimanna on-property ram sale at Yeelanna on Monday, with the average jumping almost $400 to a stud record of $2782.

AN INVESTMENT in genetics paid of at the Brimanna on-property ram sale at Yeelanna on Monday, with the average jumping almost $400 to a stud record of $2782.

The sale had full clearance on the 83 rams offered in the main auction to a high of $8400.

The top price ram was bought by repeat buyer Dan Vorstenbosch and daughter Charlotte, Arunta Pastoral, Warramboo, who previously paid the top price at Brimanna in 2017.

This was a son of new Brimanna sire Greenfields 082, which was bought by the stud for $20,000, in partnership with Minta, Mount Cooper.

The top price ram weighed 108 kilograms with an eye muscle depth of 40 millimetres.

Its fleece measured 22 micron, 3 standard deviation, 13.4 coefficient of variation, a 98.8 per cent comfort factor and weighted 2.1kg above the flock average.

Mr Vorstenbosch said the size of the ram and lustre of the wool caught his eye.

"It's just a great, huge, animal all-round, with excellent fat and eye muscle," he said.

Mr Vorstenbosch said he had initially seen the rams at the Eyre Peninsula Pre-Sale Expo at Wudinna, and followed up with them at the sale.

The rams will go into their commercial flock, which has an equal focus on wool and meat.

"We have big-framed sheep and need to keep that going," he said.

"These are large, easy-doing rams with great figures and a nice, bright, good style of wool."

The second highest price at the sale was $7000, paid by Andrew Cabot, Yallunda Flat, for a son of Greenfields 079, which was bought in partnership with Minta for $36,000.

Brimanna principal Jayden Harris said it was great to see the impact of new sires into their sale team.

"We've invested a fair bit in genetics in the past year and this is the first drop of four new sires," he said.

"It's good to see the investment paying off."

The stud has also retained one of these sons, as well as the runner-up for the Eyre Peninsula Elders Hogget of the Year - a son of Moorundie PB388, which sold for $52,000 at the 2017 Adelaide Ram Sale. Their sons will be offered in the 2020 sale.

The sale was conducted by Landmark with Gordon Wood wielding the gavel.