A young ewe from Curlew Valley Suffolk stud, Manoora, has gone all the way in the Suffolk ring at the Australian Sheep & Wool Show to deliver Rachel Chirgwin her first major broad ribbon. 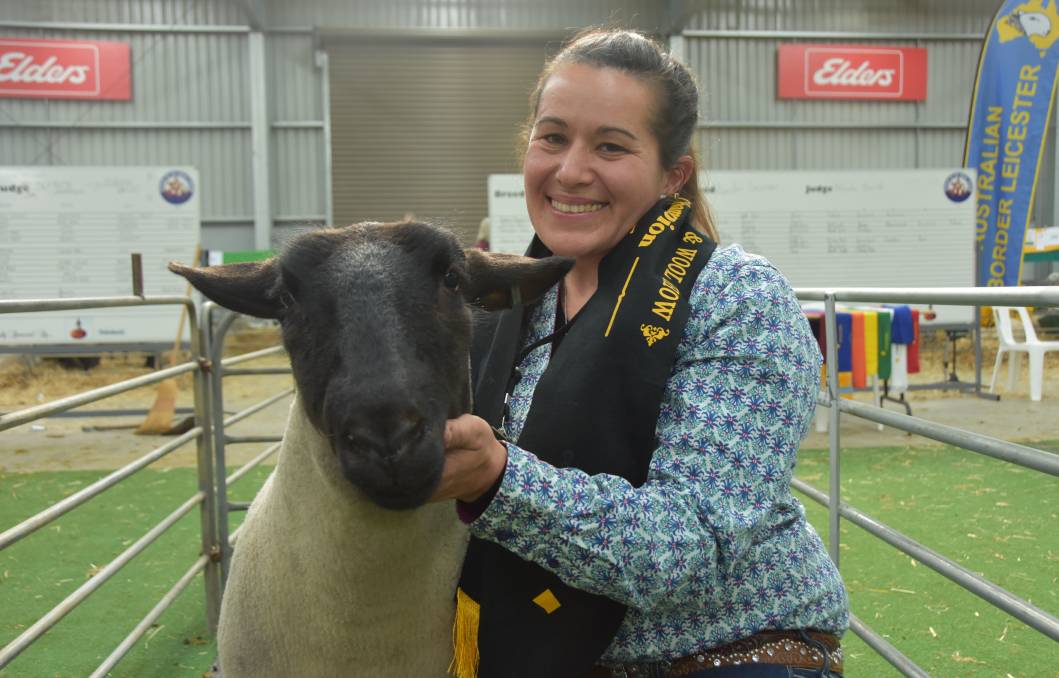 PROGENY from Curlew Valley stud's first artificial insemination program has propelled the Mid North stud into the winner's circle in the Suffolk ring at the Australian Sheep & Wool Show.

All four rams and two ewes in the stud's show team were progeny of the program conducted in December 2017.

The Manoora based stud made a clean sweep of the group classes as well as being awarded champion ewe and supreme exhibit from 110 entries entered by 14 studs from three states.

Delivering the stud its first major broad ribbon was a May 2018-drop ewe, Curlew Valley 18-007, which caught the eye of judge Craig Mitchell, Werneth, Vic.

He described her as being "exceptionally well balanced".

"She has that beautiful wedge shape, she is both very wide and deep in the back end, with a beautiful smooth shoulder, and enough femininity to carry her," Mr Mitchell said.

Stud principal Rachel Chirgwin, who has been breeding Suffolks for 17 years, was elated with the win.

Until now she has only shown on and off due to her work commitments as an accredited muscle scanner which takes her across SA, Vic and NSW.

"I have done a few Royal (Adelaide) shows but this is my first serious year of showing with Bendigo, Hamilton and then Adelaide," she said.

"I had a good team, but mostly, my work life changed a bit, so I was able to send more time, at home, looking after the sheep."

Ms Chirgwin says she knew the ewe was something special from a very young age admiring its style and growth. "I chase growth, because that's what my clients are looking for, and she hit the mark on the eye muscle depth too," she said.

The supreme exhibit's Lambplan figures include a post weaning weight of +13.5 and post weaning eye muscle depth of 0.7.