The Hammond family has been raising cattle on the iconic saltwater channels of north west Tasmania for four generations.

IMAGINE a job where your daily commute involves an early morning boat ride across a slice of Bass Strait to an island beef operation.

That's reality for the staff on Robbins Island.

The routine is interrupted only occasionally when the tides align and driving directly to the island from Tasmania becomes possible.

Robbins Island is a 10,000 hectare island that sits just off the coast of north west Tasmania. Walker Island lies just to its north and comprises another 1750ha. 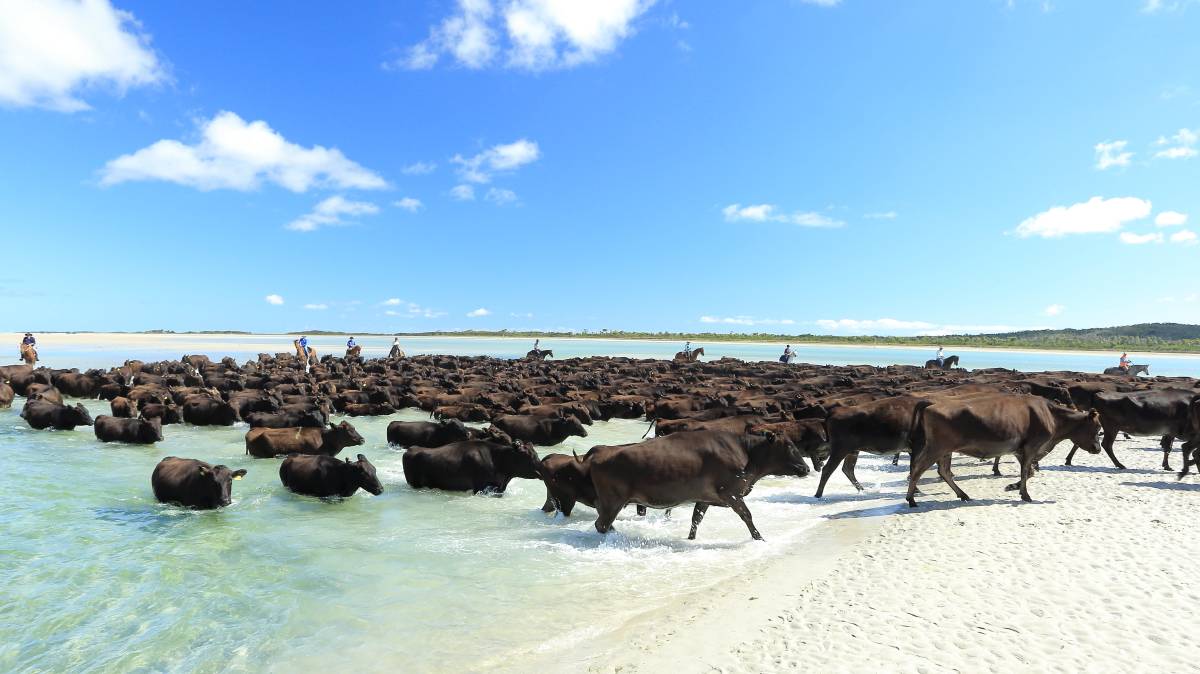 Both islands are owned by the Hammond family and the current generation is the fourth to have raised beef cattle along these iconic saltwater channels.

The operation is famed for spectacular musters where cattle are walked across thin ribbons of sand at low tide to reach Tasmania.

The story of how the Hammonds came to be running cattle in this remote part of Australia is as romantic as the notion of the island itself.

It involves a young American World War Two pilot from Oklahoma who befriended some Australians during the war and then traveled to the 1956 Melbourne Olympics to visit them.

It was there Eugene Hammond met his wife-to-be, Mary Hollyman - a young lady whose family had made their money in shipping out of Launceston and purchased Robbins and Walker Islands in 1916.

Mary and her new husband, Eugene, moved back to the United States for almost two decades before relocating permanently with their family to run the Robbins Island beef operation in the late 1980s.

Alex Hammond is the grandson of Eugene and Mary and is the current general manager of the family operation which, since the mid 1990s, has been focused on Wagyu genetics. Alex works closely with his partner Lucy, brother Chauncey, sister Sarah and cousin Ben who all have their own roles to play in producing premium beef for their brand - Robbins Island Wagyu.

Their fathers, brothers Keith and John, built the business and the herd over a 20 year period and are still involved today.

The Hammonds run about 2000 commercial Wagyu cows on improved pastures and the more remote native 'runs' on Robbins and Walker Islands.

Every six weeks we do a muster and bring 120 'heavies' off Robbins Island. That ensures a continual flow of cattle into the feedlot and monthly turnoffs into the abattoir. - Alex Hammond

The main joining of 1200 cows in December produces a spring calf drop. All 1200 females are joined via a fixed time artificial insemination program with bulls added to the herd after two repeats.

"We then do another June/July joining," Alex explained.

"It takes a lot of management to have all your animals coming through in the right weight groups.

"Every six weeks we do a muster and bring 120 'heavies' off Robbins Island. That ensures a continual flow of cattle into the feedlot and monthly turnoffs into the abattoir.

"We walk them to the western edge of the island and time it with the tides, cross a channel and end up on the sand going east. "They travel about 10km on the beach through a couple of crossing points until they get to our property at Montagu."

Alex said the operation relied heavily on the property at Montagu. It is here that the elite cattle are run and steers and cull heifers are processed before being transported to the feedlot at Bunnaloo in southern New South Wales.

"We would love to feed them in Tasmania but because you feed the Wagyu for so long it's cheaper to take them to the grain," he said. 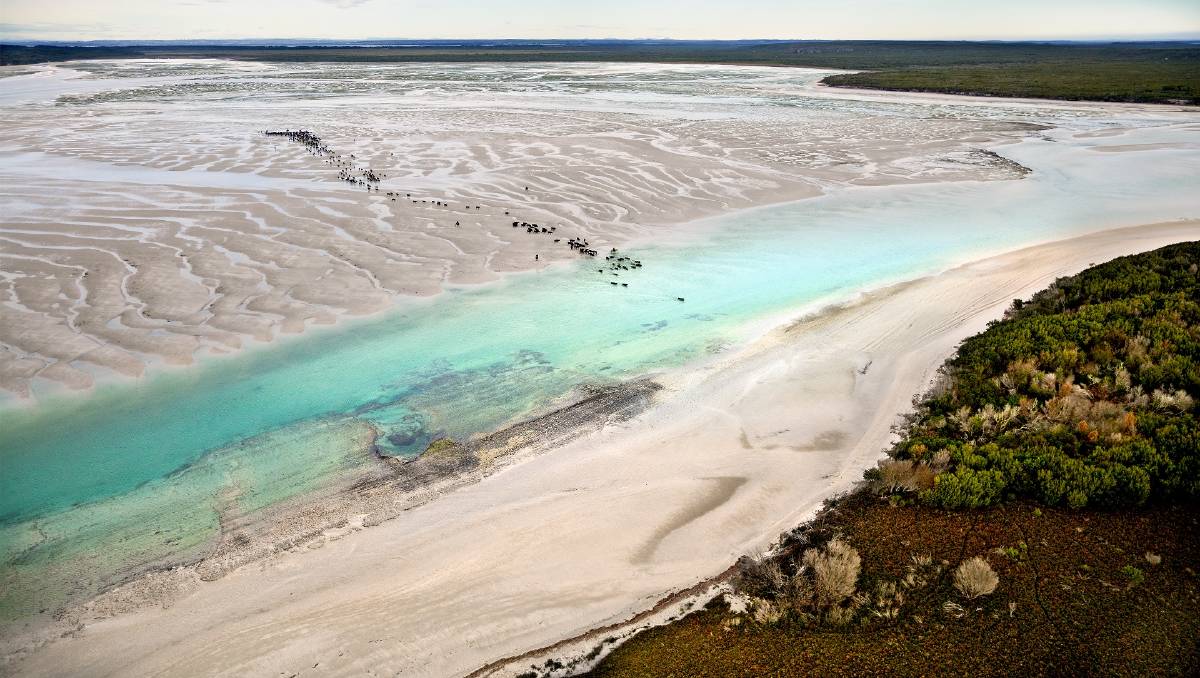 Wagyu cattle crossing from Robbins Island to the Tasmanian mainland.

The steers go on to feed at 15-18 months of age, typically weighing about 400kg.

They are fed for 450 days before being transported back to Greenham's Smithton processing facility.

"I think what people like about our beef is not just the quality but the story behind it and the fact that there is traceability right the way through," he said.

"Some brands buy in other Wagyu cattle but with our brand every animal that comes through was born on Robbins Island.

"A lot of restaurants want to know that paddock to plate story."

Alex said Greenhams regularly bring butchers and chefs to the Island to familiarise them with the Robbins Island story.

Around 30 per cent of the branded beef stays in Australia and can be found in restaurants and high end butcher shops in Hobart, Sydney, Melbourne and Brisbane.

There is also strong export demand for the product with Robbins Island Tasmanian Wagyu sold to Taiwan, China and Korea. "The Asian market is huge for us and we certainly wouldn't be able to sell all our beef here in Australia but we love seeing it here too," Alex said.

In more recent years, the Hammonds have been focused on transitioning to polled Wagyu genetics - all starting with an original purebred embryo cow born in 1996 that happened to be polled.

"By 2015 we had a lot of her progeny in the herd but we didn't really do anything about it because we were so focused on producing animals that had the right carcase traits," Alex said.

"In 2015 Keith saw an opportunity with the polls to really make a go of it. "We had about 20 animals in the herd then that were polled and took them and crossed them with certain elite polled genetics."

Alex said the aim of this unique partnership was to fast track the development of quality Polled Wagyu genetics in Australia. He said the Hammonds now have about 600 polled replacement Wagyu heifers to join this year.

Alex said there was no denying the rise in demand for polled genetics.

"It is a combination of things - certainly animal welfare when it comes to dehorning," he said.

"We see the polls playing a role in the North and they do get higher losses dehorning cattle when they might be older.

"Some countries in the EU are really looking for the polled Wagyu - some have banned dehorning already so it's only a matter of time."